It was a hot night in July. I attached two photos—one of me with the baby, one of her with my husband, selected from the 75 or so we’d already taken with our new camera, bought especially for this event, as though nothing before had been worth capturing—and sent it off.

It might have been 6 pm or 11 pm, I don’t know. We were new parents, and time had already lost its predictable thread. We had just returned from the hospital and despite the fact that I should have been nursing or sleeping, I was determined to let everyone know our daughter had arrived.

She was 12 days late, and when you’re that overdue, friends and family stop masking their impatience. My aunt joked that I should have had twins (which run in my husband’s family) because “they would have come sooner!” Many people wrote to ask, “Have you had the baby yet??????” (always with multiple question marks), or worse: “Why isn’t she here yet?” Like I knew. My father, who had arrived with my mother ten days before my due date, took to sighing when I waddled up to dinner, holding his granddaughter hostage.

On Day Ten I stopped communicating with everyone but my husband and midwife. That night, my contractions started.

After 26 hours of labor, I had dilated only one centimeter. We hadn’t planned on a doctor, but everything was going wrong. She strode into the laboring room in jeans and a billowy blouse, stuck her hand way up inside me, and, like everyone else, said, “Where’s the baby?”

An epidural and two hours of Pitocin made just one more centimeter of difference, so after I blearily signed my consent, half a dozen nurses swarmed me, poking my arms and spine with needles and shaving my pubic hair and putting a cap over my hair and numbing my belly and legs. When they rolled me down a long series of hallways—it was the middle of the night—I started shaking uncontrollably.

On the operating table the midwife held my cheeks to keep my teeth from chattering. They cut the baby out within ten minutes and my husband took her to the sauna, where she rooted at his nipple. I was left shivering on the table while they sucked out the amniotic fluid with what sounded like a vacuum cleaner. When I started to panic, they gave me a sedative.

I spent the early part of that first night at home—the night I sent out the birth announcement—crying so hard that my midwife ordered my husband and baby out of the bedroom so that I could get six consecutive hours of sleep, rest I hadn’t had since my contractions started eight days earlier. I felt so negligent—so convinced my milk wouldn’t come in, so convinced that I was “burdening” my husband with the care of our daughter—that I snuck into the living room where he was sleeping with our tiny girl on his chest and attempted to lie down beside them. We barely fit, which suddenly seemed an apt—if heavy-handed—metaphor. I tried to rest my head on his shoulder, where it had always simply belonged, but our baby was taking up most of the space, and my C-section made it hard to lie on my side. I could barely keep myself from falling off the couch.

My tears and snot made a puddle on my husband’s shirt. I missed him, my husband, the person I loved more than anyone—or had before the baby’s birth. I felt as if I had already lost him to the baby. Not that he loved her more, nothing so Oedipal had happened, but simply that our twosome was no longer only ours. Even if I could get him in a room alone, which wouldn’t happen for some time, I couldn’t have him completely, psychically, to myself any longer; she would always be there.

We had said our vows only a year earlier, but we were now, in an instant, just as committed to someone else for life. Or as a friend who, also at 35, gave birth to her first child, said to me days after her son’s arrival, “I’ll never not be a mother. Horror.”

Of course it wasn’t that I didn’t love—or want—my daughter. It wasn’t that I hadn’t planned the pregnancy. It was that the baby’s arrival was not just joyous—indeed I will never forget the howl my husband let out when the midwife brought our bundle around the curtain—but decimating. A bomb had fallen in the middle of my marriage; a perfect, wanted bomb, but a bomb nonetheless. What I really wanted to write on that birth announcement was, “I love my daughter, I am so grateful she is healthy and safe, but I miss my husband terribly. There is a hole in my heart where our twosome once was. What have we done?”

It’s been only a few months but I can now say that I love our daughter with a ferocity and fragility that terrifies me. I feel that thing you’re told you’ll feel—that before you have kids you can’t experience this depth of heart-exploding, do-anything-for-you-without-question love. When she flaps her arms in excitement when I reach into her crib in the morning, I momentarily forget that I had a life that meant anything to me before her arrival. Now I know that I will be very, very lucky if I am “never not a mother.”

Still, I haven’t so much gotten used to her being here as adapted, although “adapt” sounds like I’ve made the switch from whole milk to soy because it’s better for my cholesterol. New motherhood is a fast highway going somewhere you’ve never been—unfamiliar scenery, sometimes dull, sometimes stunning—with no map, no street signs and no stoplights. Like all new mothers, I just do, and the doing is endless and constant and choice-less and looks like nothing I’ve ever called doing, the tedium and physical demands coupled with surprising pockets of ecstasy.

For a long while I would wake to her crying at 3 am and not register that she was mine; that it was I who was supposed to do something. Does that part ever really sink in, I wrote to my Mom friends. That this is your baby? Your life?

But I cannot afford to think too hard about any of this.

My thoughts turned dark a few weeks in, when all she did was sleep, cry, eat and dirty her diapers. I wondered whether we should have waited. I felt too young to be a mother, and yet we started trying because I was almost entirely too old.

Scenes of our early courtship tormented me—after knowing him for barely six months, I had moved to Europe to be with my soon-to-be husband, leaving a life in New York I had cultivated for 12 years. In the two years we’d been together, we had lived in three countries, spending most of our time with no one but each other, needing little else. When our daughter was born, I’d look at her and feel immeasurable guilt for wanting that time back.

How could I love someone so much and also want to return to a world without her—a world that can no longer even exist in my imagination because the very fact of her being crushes the fantasy? To my husband I said, “I love her so much but I miss you.” My husband, ever the pragmatist, replied, “I feel like we’re running a baby business.”

For now, the baby and I are the twosome in the family. Because we live in Austria, where maternity leave lasts a year, I am with her all day while my husband is at work. Most days I just enjoy our time together, and I sacrifice my own well-being again and again—picking her up even if my back barely allows me to bend; waking up once more even if I am crippled with exhaustion—to make sure she is okay. I am far more likely to go to sleep and wake with her than with my husband. This saddens me but it feels inevitable. But much to my ignorant shock, even when she begins to sleep through the night or starts daycare, it will never go back to what it was: just my husband and me, the two of us, even in the moments when we are alone.

Modern parents who pride themselves on a “fair” or “balanced” division of labor often say of their spouses, “We’re a good team.” And we are. But it is also hard to deny how much she and I work as a unit, me anticipating her every need before it leads to a meltdown, like a vigilant goalie keeping the soccer ball out of the net. My husband is low-maintenance, so he treats my shift in attention away from him as stark, temporary fact, not intentional wound, but that doesn’t make it any less troubling.

Of course I know that our original twosome will eventually morph into a threesome—experienced parents will tell you that everything changes—but it has surprised me how challenging it is to adjust to family life. I say “family life” because I mean it as distinct from adjusting to motherhood.

I remember saying to the baby in my womb that she was our lovechild, born out of her parents’ adoration for one another. Surely it’s the same for every expectant parent: In my mind we would simply be adding her to our marriage, a piece of each of us to strengthen our bond. But what’s happened is that her presence has reshaped the partnership, making it virtually unrecognizable. We have had to rework almost every pattern—from household tasks to evening rituals to physical affection.

It isn’t at all like adding a piece to the puzzle. Our previous puzzle was complete. Now, we are apprehensively becoming pieces of a new puzzle. We aren’t yet sure which way to turn each shape to make it snap into place—don’t quite know what the whole picture looks like—but we are working, every day, to find out. 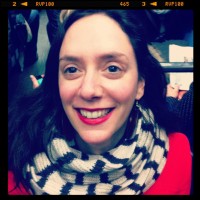 Abigail Rasminsky holds an MFA from Columbia University. Her work has appeared in The New York Times; O: The Oprah Magazine; The Morning News; The Nervous Breakdown; The Forward; The Millions; The Faster Times; and Dance Magazine, among other publications.