Last March I joined two thousand strangers to see Brian Weiss speak at the Javits Convention Center in Manhattan. We’d all come for the same reason, to view a past life, and this alignment of intention made us a very friendly community, with diversity in age and ethnicity you rarely see outside the subway.

To summarize Brian Weiss’ ideas I’d start with the concept that we have lived before and will live again. We travel our lives with the same people over and over but the relationship configurations change. And this life may be very hard but it’s a school—it’s where we learn to be more compassionate, more open, more helpful to the world.

This is something that either resonates or does not. I didn’t believe in anything at all until all of a sudden I believed this, so I understand skepticism. But I would point out that life gets much easier when you can say to failures and lost opportunities: I release you, as you were not meant for me. If you believe, for example, that someone who dies will return to you, a life or two from now, then grief lessens. It really does. Because then you get to yell at the retreating back of something or someone you love and are losing not goodbye but see you soon!

At my 30th birthday party two summers ago, a night already memorable because my husband rented a karaoke machine with strobe lights, a friend gave me Brian Weiss’ book Many Lives, Many Masters. She said it changed her life, which is my favorite thing for someone to say while handing me a book. The word spiritual on the cover put me off, but tell me a book changed your life, especially if you’re a person I already have a crush on, and of course I’ll read it. I finished it that weekend. Many Lives, Many Masters describes how Brian Weiss was a traditional psychiatrist with degrees from Columbia and Yale, not a believer in reincarnation at all, until he hypnotized a woman named Catherine as part of treating her and watched her spontaneously regress to an earlier life. He keeps having sessions with her—the situation is unexplainable and he’s fascinated—but also the act of viewing these earlier lives makes Catherine’s current life better. She gains insight on patterns and relationships. Her phobias blink off and never return. She even loses her fear of death, because she knows she’ll just keep going.

Dr. Oz brought Brian Weiss on Oprah in 2008. The theme of the episode was phobias, although the ones mentioned might not impress skeptics. Like, one of the women had a debilitating fear of sharp corners. With another woman, it was dolls. Understand that by phobia I mean replenishing ocean of horror. It is real, and it is awful, whatever it’s about. A phobia that is also embarrassing has even more of my sympathy. On the show, Dr. Weiss hypnotizes the women, guides them into troubling memories (often the grisly ending of a prior life) and when they wake up, their fears are gone. However much sense that makes, if you think it makes any at all, it is impressive and moving to watch.

I happen to know from phobias. For me it presents in elevators as ticking noxious panic that I will be trapped and die. First comes the flare of adrenaline, then pressure on my lungs so they feel squeezed-flat and about to fail. If I have the option of taking the elevator or walking 10 flights of stairs, I take the stairs every time, but I live in New York and virtually every non-residential staircase is locked unless there’s a fire. And this fear comes from no trauma I can recall. I got the first hint of it at nine, when I crawled beneath an empty refrigerator box with a flashlight and markers. I lowered the cardboard around me and saw the fear hanging out in that dark. It had always been there, I just hadn’t met it yet. I flipped the box and ran.

Which brings me to the hopeful heart of my desire. If I find a past life cause for my phobia, maybe it will leave me alone.

When I saw that Brian Weiss would be speaking at the Javits, I got tickets for myself, my husband, and my parents. But this was not the first time I’d paid money to be hypnotized. I’d had a private session years before to help with the claustrophobia. I hadn’t discovered Brian Weiss yet and I don’t think the woman offered past life regression anyway. Had she mentioned it, I probably would have left. Her type of hypnosis required only that I relax enough to receive a subliminal message. I tried to get comfortable even though I was sitting upright on a low-backed couch. But only a moment after she started, she began counting and then it was over. She asked me to open my eyes.

“How long do you think we were doing that?” she asked.

I wanted to be nice so I said five minutes. It could not have been more than one.

She pointed to the clock on the wall. “Almost an hour.”

The lost time spooked me. It also convinced me something real had happened, and I found I liked knowing this new fact about myself, that I was hypnotizable. I’d woken out of the trance refreshed, as she’d told me I would, and I left her office feeling good. Her building was one of the wonderful few with an open interior staircase, accessible to all, in addition to its elevator. I’d taken the stairs to get up to her office but on my way out, I went to the elevator instead. I pressed the button. The elevator, like the building, was glamorous but ancient. When the gold doors pulled themselves ponderously apart, I glanced in. To my disappointment, I saw my fear still there, waving at me. I stepped back and let the doors close. Then I took the stairs down. As I’ve done ever since, whenever possible.

At the Javits, Brian Weiss led us through two group regressions. I think I got close. I relaxed into a hazy between kind of feeling. But we were a very large, very full room, and this is where the community vibe became a hindrance. A woman near me fell asleep and snored, someone behind me adjusted their feet on the base of my chair, jolts that echoed up my body, and I began to obsess over needing to wade through a long row if I had to use the bathroom. I listened to Dr. Weiss guide the experiences and his voice relaxed me. But I didn’t see a past life.

The last exercise Dr. Weiss took us through involved communicating with a symptom. Something we want to be rid of—physical pain, a phobia, whatever. He set up a trance state and I fell partly in. We were to imagine bringing on our symptom, so I pictured myself in an elevator paused between floors, and the panic came immediately, pressing on my chest. He asked us to look at this thing that bothers us, to really see what it looks like. I saw my claustrophobia as an angry red cloud. Then Dr. Weiss said switch places with it. Become the symptom. And once you’re in there, ask it what it wants.

What do you want? I asked. Because anything. You can have anything.

The red cloud said get the fuck out of New York City.

Apart from this sound, unusable advice, I did not feel the day was a success. My skeptical family left no more convinced than they’d walked in. As I’ve said, this either resonates or doesn’t, so I didn’t take their lack of amazement personally. But I did hate that I hadn’t seen a past life. I’d failed to get hypnotized enough, even though I knew it was a thing I could do.

Considering that made me think. There are plenty of people, many Brian Weiss had a hand in training, doing one-on-one past life regressions in the city all the time. Maybe I needed it to be personal.

So I found someone with good Yelp reviews and made an appointment.

The night before the session I did the crazy thing I always do when going to an unfamiliar building in Manhattan, where I google map the address at street view and guess how treacherously maintained their elevator might be. Because even if I walked fearlessly out of my session (this thought overwhelmed me, I saw stars), I would still need to take the elevator up while afraid. My fear is not so bad that this kind of thing keeps me from sleeping, I fell asleep fine. But it was the last thing on my mind.

I got there early and stood on the sidewalk for a few minutes before going in. When you start paying attention to past life regression stories, you notice the most effective ones are always deep purge sob-fests. People wake up better but they go through some shit first. I tried to relax. Staying open was all the situation required of me, I could trust my mind to handle the rest. Also making me tense was my dread over the elevator I was about to get inside. But then when I walked in, I saw, in addition to the elevator, an open interior staircase. Just like in the building where I’d first been hypnotized. Relief shot through me so hard, I cried.

A trance state opens an interesting door. I was guided into a dreamy, pleasant disassociation with my body. I got to fall off to the side of sleep, which is closer to the surface than I went my first time. From this part of my mind I could opt out of consciousness but still observe it. The hypnotist asked me questions and I answered. I was there the whole time but I was also in the memory.

Okay, here’s what I saw. Blackness, everywhere blackness. The press of walls all around. Awareness settled slowly and imperfectly, but I thought I was in a closet or narrow pantry, and then I got the strong impression of having been put there. The door was locked. I could picture pretty well what the enormous room outside the closet looked like, I saw sheets draped over furniture, a dusty chandelier, and my feeling was that I probably worked there. I was very thirsty and felt hopeless. I think I had been in there for a while. Then it all went black and I was counted back into full consciousness.

As I’ve said, this either resonates or doesn’t. Whatever it means and whatever it was, that’s what I saw.

When I left the session, instinct took me to the stairs, but I stopped myself. The hypnotist had warned me that even if I’d been cured, a residual fear of the fear might remain. So although looking at the elevator did inspire familiar low grade nausea, I forced myself to walk over.

I pushed the button. Then I closed my eyes and pictured very clearly the red cloud of my claustrophobia. I whispered to it I release you, as you were not meant for me.

The doors slid open and I got inside. And for the first time in my life, I was in there alone. 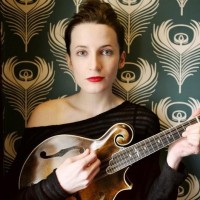 Bodine Boling is a filmmaker, writer and voiceover artist in Brooklyn. This is her website and this is her Twitter.