An Encyclopedia of Everyday Monsters

Excerpts from Figueroa’s Findings on the Habits of Everyday Monsters

The Earworm (Halicocephalus strepitus) is a microscopic parasite most commonly found in the inner ear of human beings. These creatures have long been assumed benign due to their symbiotic relationship with nearly all human people and a lack of evidence pointing to their presence as a source of harm. Several scientists attempted to narrow down exactly what earworms subsist on and why our humble ear canals provide such a hospitable environment. Their now-classified research went largely unfinished as the full 8 person team vanished after a few months of experimentation; this wasn’t uncommon for scientists in the 19th century. Though there are few discernible benefits to being an earworm host, there are no demonstrable negative effects either. To keep it that way, make sure you nourish your earworm with high quality repetition. Childhood commercial jingles and any music to which you can recall fewer than 5 consecutive words of lyrics are ideal, but playground songs and modern electronic pop are great alternatives. Odd words and nonsense phrases (e.g. tuberous phalange, cantankerous, spoon plumage, serving Council of Nicaea realness) are a sign that your earworms are healthy but restless. Don’t let them become restless.

Homesickness is a quasi-sentient virus that is present in most beings. It is studied most extensively in primates, especially humans, but has been observed in species as divergent as cats, elephants, mice, and whales. Like chicken pox or MRSA, this virus has no cure and often experiences protracted periods of dormancy. Symptoms vary from case to case but include heartache (similar in intensity to acid reflux), unprompted crying, insomnia, general malaise, and explosive sighing. Flare-ups are often more severe after a dormant period of longer than 2 years. Homesickness can often be mitigated by interacting with close family or friends; parents and siblings frequently offer most effective respite as specific symptoms are intergenerational. Foods or sounds from one’s home or childhood can also be an effective emotional analgesic.

Self-doubt (Siccumbra autophobus of the order Narcomedusae) is a shade or phantom that hovers just behind the left ear of its host. It feeds on the Unknowable, a dense kernel of je-ne-sais-quoi and god-only-knows deep in the human brain. The fear, insecurity, and general dislike of oneself by which the host often finds themselves overwhelmed is simply a waste by-product of the Self-doubt phantom’s inefficient digestive process. An individual besieged by this phantom and its ilk often mistakes the disgust at the piles of unseen phantom waste as disgust at themselves, such is the insidiousness of Self-doubt. Many cures have been sought but this particular monster can only be fought off through, much like iocane powder, cultivating an immunity. Self-doubt is, by all accounts, an asshole; it is repelled by Confidence, particularly by the Verve, Guts, and Moxie varieties. The Unknowable inside you contains every horrible tragedy you can imagine but infinitely more of the triumphs and braveries that you can’t believe you possess. Start off by deploying some fortifying internal monologue when you feel Self-doubt looming. Simple phrases such as Fuck It or Fuck Yeah, even with regards to small but decisive life moments (e.g. “Fuck it, I’ll join a bowling league”, “Fuck yeah I am the best at folding laundry.”), can prove effective.  In more severe cases, a large dose Fuck ‘Em can be employed (e.g. “I clearly look amazing with my shimmery teal unibrow. Fuck ‘em”). Elevating the chin or arching the brow often amplifies the effectiveness of these affirmations. This phantom is resilient and can escalate to alarming levels of despair only moments after initial contact. Constant, vigilant self-love will weaken even the strongest shade.

Procrastination (Tensumbra meh) is a lesser shade, related to Self-Doubt through a common ancestor whose name I’ll look up later. Procras can be mistaken for laziness but the root cause is fear of inadequacy and not indiff. We’d all be so lucky to feel simply lazy. Abbrvs, shortcuts, panicked repetitive unproductive thoughts, shortcuts, the delusion that one maintains control over outcomes despite avoidance, and shortcuts are s/sx. I assure you we will return to this topic in later chapters.

The Tampon Imp (Plenibursa cupidus) is a general household pest. Its common name is a bit of a misnomer as it generally seeks out a variety of cotton materials like medical gauze and cotton balls. Menstrual products are not necessarily a favored quarry of this imp; the absence of these products is generally more noticed due to frequency and urgency of use. A specific portion of human population notices the habits of the Tampon Imp through the phenomenon of shortage, wherein an individual believes they have an sufficient stock of napkins or tampons and yet comes to find themselves in dire need, often at a deeply inconvenient moment. The imp does not intend to disrupt one’s daily life or otherwise wreak havoc on an unsuspecting underwear drawer; these creatures are rather like burrowing rodents that enjoy warm, fluffy nests but can often take more than their share of cotton goods. Sometimes the imps can be fooled into thinking they are taking the last of a stash by leaving a single tampon or cotton bud in a bathroom drawer or on a nightstand. Another benefit of carrying a decoy pad in a purse is one may be able to come to the rescue of another unlucky person who has been caught unaware by a greedy burrow of imps. It is currently held that these imps are related to the pests that swipe socks from washing machines and clotheslines, but concrete evidence establishing a definitive biological connection has yet to be found.

The Giggles is a currently uncategorized species of monster; it has defied traditional approaches to taxonomy through its ability to remain hidden to all but the youngest of humans. The oldest known child responsible for a confirmed sighting and description of The Giggles is 6 years and 4 months. Through careful surveys and detailed crayon drawings, researchers have concluded that the average Giggles is covered in dense fur, has large protruding eyes, and long digits used for tickling and grabbing. A Giggles can vary wildly in height (though they are often reported to be quite large, sometimes exceeding 7 thousand billion inches) and color (their fur has been described as “brown, like my dog”, “pink polka dots and purple stripies”, and “all of the colors”). Due to their invisibility to the general populace, their interactions both with humans and other Giggles are exceedingly difficult to study. Giggles can strike anyone anywhere and are commonly encountered in churches, important business meetings, exam days at school, and libraries. They are generally harmless monsters but persistent in their pursuits; given their reputation for interrupting official congregations, solemn events, and their seeming avoidance of government buildings, Giggles can be assumed to be anti-establishment, possibly living in anarcho-syndicalist communes. 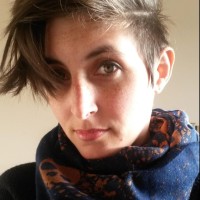 Kristina Casto-Ardern has a lifelong love of liminality, witches, and cinnamon. She is a Californian living in the south of England with three cute guys (one human, two feline). She haunts Twitter.