Nothing to Worry About: On Living With Phobias

A couple days ago, I had just began to shampoo my hair when I saw a spider dangling under the faucet, struggling to hold on to its filament.

My heart started racing and I had one foot out of the tub before I started reviewing my options—I could end my shower now, covered in suds. I could try and wash the spider down the drain. I could yell for my boyfriend.

I stood there, frozen in indecision and embarrassment, my eyes never leaving the spider.

Irrational fears are hallmarks of humanity. No other creature is afraid of something without a logical reason—even my cat’s fear of vacuum cleaners makes more sense than my arachnophobia. My fear of spiders isn’t limited to black widows and brown recluses. I’m just as terrified of a wolf spider or a daddy long legs (it’s not technically a spider, but it’s close enough for me.) I’m not afraid that a spider will bite or poison me. It’s the sinister aesthetic of the spider that terrorizes me. The bend and movement of those legs screams pure malice and makes a spider look like a demonic hand.

I always thought phobias were limited to people who were perhaps a little off-kilter already, but they’re not. Most phobias start in childhood between ages 4-8. Some are inherited, as we tend to fear what others, particularly our parents, fear, but most, like mine, are learned from unpleasant experiences. The origin of my arachnophobia, then, is fairly typical: one day in elementary school, while standing against the brick wall of the school serving lunch detention, I gradually became aware of something in my mouth. I figured it was a leftover morsel from lunch and spit it into my hand where it unfurled into a spider, those legs emerging from what seemed like a wet crumb.

Who wouldn’t be freaked out by that? But I had no idea that the incident would develop into uncontrollable fear. Being afraid of spiders or snakes or heights isn’t necessarily unreasonable—on a basic level, these fears are helpful to survival. What distinguishes phobias from reasonable fears is the pervasive anxiety, the escalation into panic, or the changing of behavior. Many phobias, like mine, are learned, while some are inherited, as we tend to fear what others, particularly our parents, fear. Other times a perfectly reasonable or natural fear becomes exaggerated by the mind, causing a kind of mental misfire. Even though it’s a common technique for dealing with fear, avoidance can also cause a fear to become a phobia. I’m not exactly sure when my fear became a full-blown phobia, but by the time I graduated high school, I surveyed the corners of every room and if I saw something that could conceivably be a spider, I couldn’t stay.

Once, in college, I was driving to a grocery store late at night and noticed a small white spider running around the perimeter of my rearview mirror. InstinctivelyI threw the car into park and jumped out, leaving the car on the street, door open, still running. I ran to the nearest house and knocked on the door. All the while, I kept thinking, this is crazy, but I didn’t stop or slow down. A guy a little older than me answered the door. “There’s a spider in my car,” I said, realizing how I must have sounded. He stared at me. “I’m afraid of spiders,” I said, deeply embarrassed to be the distressed damsel. “Would you please get it for me?”

To his credit, he didn’t do anything creepy or mean—he didn’t even laugh at me. He walked out to my car where I pointed to the spider and he grabbed at it. “Did you get it?” I asked.

“You have to find it,” I said, panicked, my throat closing behind the words. “Please.”

I stood on the street while this strange man pawed around until he found—or claimed to find—the spider. I thanked him profusely and got back in. On the way to and from the grocery store I felt spiders crawling all over me. I swiped at my legs as though to knock them off. Later I played the story for laughs, but the incident made me feel crazy. I could sympathize with agoraphobes, germophobes, coulrophobes (clowns), and even metrophobes (poetry).

Irrational fear works in a cycle. I constantly scolded myself for my reactions; the resulting shame was almost as big a source of anxiety as the fear itself. Encountering a spider triggered a landslide of fear-reinforcing negativity, and my arachnophobia intensified as I struggled with the idea that my brain could be so irrational. My arachnophobia was a constant reminder of my imperfections and became synonymous with my fear and shame of being deeply flawed. After a while, they both seemed equally inescapable. Trapped in this cycle, my phobia worsened.

After graduation, I traveled to Europe and stayed at a hostel in the remote wilderness of Western Ireland where spiders clustered in the corners of every room, inside the overhead lights, and over every doorway. My travelling companion, Mike, spider-proofed our room, releasing a half-dozen out the window. Had there been another hostel within 50 miles, I’d have sprinted away. It was my version of hell.

In the middle of the night I went to the bathroom and saw two big spiders pop out of the shower drain. Their sudden emergence triggered something in my brain. I was sure there were thousands of them ready to crawl up into the sink and the shower, to pour from the faucets. I had a full-blown panic attack. Mike, who had known me for years, had never seen me like this—no one ever had. He was scared, and I couldn’t blame him. A part of my brain managed to untangle itself from the consuming terror and ask, is this really me? This quivering mess of a person, unhinged by something normal people step on without thinking twice?

I blocked the shower drain with a hardcover copy of Madame Bovary, but I was on their turf. I crawled into my sleepsack and felt them all over me. I shook my sack out three times that sleepness night, increasingly aware that the spiders weren’t the problem—my brain was.

Roughly half of Americans have some kind of mild phobia and anywhere from 8-18% have diagnosable phobias—an exact number is impossible to deduce, as embarrassment begets silence and many never seek treatment. Women seem to be more susceptible to phobias than men. The “if you can think of it, someone has it” concept applies. People fear everything from the number 8 to air to cotton balls. As I peruse this list of phobias, a voice in my head still says, “fear of Northern Lights? That’s crazy!” Which, I suppose, is exactly the point: cue judgment and shame.

I thought about getting treatment, but there always seemed to be bigger problems to solve. I considered exposure therapy, a graduated and monitored contact with the fear. Generally, a patient learns more about the fear (how rare it actually is to die from a snake bite, for example), then imagines the feared scenario, then encounters the feared scenario. For me, this would mean coexisting with a spider, and then eventually touching one or letting one crawl on me. The thought of this still spikes the hairs on the back of my neck. I didn’t go this route is because I’ve never feared a poisonous spider bite. I also find spiders fascinating—while I get the heeby jeebies, I can watch nature documentaries about them. My brain knows they’re on television, not in the room with me. That all changes once we’re sharing the same space.

Early-life phobias often abate over time, as mine did. Life helped too. I moved to New York City on September 8, 2001. Suddenly, there were very rational things to be afraid of. In NYC I lived above a grocery store and many opportunistic creepy crawlies emerged from cracks in the floorboards. My cat took a liking to cockroaches and regularly deposited them, alive, in my shoes or in my purse. I’m not afraid of cockroaches, but I don’t enjoy them, and finding them in unexpected places was startling enough to momentarily tap into the panic I felt when I saw a spider. But I learned to live with the surprises she left me. This was, in a sense, my own version of exposure therapy. Travel helped too, especially to Central and South America, where gigantic and terrifying insects are a fact of life. I slept under netting, used copious amounts of DDT, and sometimes I forgot to scan the walls of rooms and tents. It may seem like a small step, but the lack of anxiety was profound. It’s similar to the way feeling normal after an illness seems like a miracle.

Another miracle is choice. As I stood with one foot out of the tub, I couldn’t eliminate my fear, but I could decide how much to let it affect me. I didn’t linger and I kept my eye on the spider, but I finished my shower. Eventually it got lost in the suds, which prompted a brief wave of panic—the only thing worse than seeing a spider is seeing the empty place where it just was—but by then it was time to turn off the water. As I toweled off, I didn’t look into the tub. I didn’t even wonder if I’d encounter the spider again the next day. I simply dried off like a normal person, with perhaps a touch more pride. 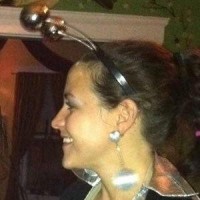 Joelle Renstrom teaches at Boston University, maintains the blog Could This Happen?, and writes for Giant Freakin Robot. She's addicted to chapstick, loves the color orange, and hopes to keep the number of countries she's visited higher than her age.