On Being a Cartoonist

A couple of weeks ago, somebody wrote me on Tumblr asking how I come up with my ideas. He said he’s an aspiring artist, and that his biggest problem is finding inspiration. He explained how he spends long nights staring at a blank canvas, and it was turning him off to art. I replied, admitting that I had spent the past hour or so staring at a blank computer screen, completely uninspired, and had finally decided to take a break to answer some emails.

I spent most of my twenties turned off to art. Although I was working as an artist, I never really considered myself one. I hated my own drawings, I felt they were much too stiff, lacked construction and energy. I would feebly attempt to draw differently, the way I was “supposed” to, and always came back to my own style. Eventually, I started doing more things that forced me to be uncomfortable, like taking improv classes and singing karaoke. I realized that if I was terrible at something and looked like a complete idiot doing it, the absolute worst thing that could happen was that I’d be terrible at it and look like a complete idiot doing it. Turns out, that’s not such a big deal. So I started drawing the way I like, and started posting my drawings online. It’s not necessarily that I like how I draw now, it’s just that I’m much more comfortable with who I am.

One of the first comics I posted to my Tumblr page, back when I still wasn’t exactly sure what I should be posting or why I started the page in the first place.

Ideally, my ideas just pop into my head. Those are usually the better ideas, the comics I’m most proud of. Other times, I sit down with the intention of doing a comic, and I’ll usually scroll through a google image search of animals, or animals+funny, or animals+cute, or animals with long necks, etc, and try to get ideas that way. And then there are the times where I just sit down and attempt to force an idea into my head. Those are the blank canvas times, the times where I usually have a mini panic attack and ask myself “what if you can never think of an idea ever again?” Luckily, I’m pretty easily distracted, so when that happens I usually just go on Facebook or make myself a sandwich or something and my anxiety is gone.

I’d been trying to think of a comic with a rattlesnake for a while, but couldn’t think of anything that I hadn’t already seen before. Then this idea popped into my head, and I thought “that’s ridiculous!” and drew it anyway.

Once I’ve come up with an idea, even if it’s terrible, it’s going to be finished and posted on Tumblr or I’m not able to move on with my life. I’ve posted every comic I’ve ever done, and finished every comic I’ve ever started- even the ones I hate. For some reason, I am not able to move on from one idea to the next until the first idea is executed (and to me, for some reason, that also means posting it for all the world to see). I hesitate to say this next thing, because I realize how silly it’s going to sound, but once I’ve thought of a comic, it needs to exist, I want it to have a chance in the world before I can move on. And if it isn’t well received, I think “Aw, it’s okay guys. I still like you.”

I didn’t like this comic at all when I drew it. I kept it on my desktop, went to bed, then looked at it again the next morning and still didn’t like it. I posted it anyway, and it actually ended up being one of my more popular comics.

Luckily, when I’m stuck, I have a few go-to characters who I feel pretty familiar with, and it’s usually easier for me to do comics with them. I’ve drawn them enough that I feel more of a connection with them, so I can almost think of them as friends who I can place in absurd situations. The rabbit and bear are always inspired by my husband (the sarcastic, smart rabbit) and myself (the clumsy, ridiculous bear.) The frilled lizard has taken on the persona of my good friend Edwin, who is one of the kindest people I know and would gladly shield you from a storm or even fashion himself into a kite for you if he were able.

Sometimes I just want to draw an animal, even if I don’t have an idea. I’ll just think “I GOTTA DRAW A RHINO” and it just has to happen. If I can’t think of anything funny, I try and draw something that might make me happy if I saw it. I keep in mind some of the wonderful emails I’ve received from fans, and try and draw something that might make them happy. There’s a lot of really disturbing stuff on the internet, why not make something sorta nice?

If do run out of ideas, I don’t believe I’ll ever stop drawing these characters. Even if it means sitting and staring at a blank screen, completely uninspired, I will keep drawing them because I want to see where they go next. And even if it’s no place special, and the wonderful and surprising reception they’ve received fades away, I’ll think happily to myself “it’s okay guys. I still like you.”

Good news! I want to make some for you. Simply pre-order my new book The Little World of Liz between 8/18-9/19 and send proof of purchase to info@kayepublicity.com. Everyone who pre-orders will receive an exclusive signed 3×5 postcard (up to 3) and one lucky winner will receive a CUSTOM print! You can pre-order from Barnes and Noble, Indie Bound, Books a Million and Amazon! OR you can order & pickup from Diesel or Vroman’s bookstores in Los Angeles, where I will be having signing/launch parties this Fall (more info about that coming soon). 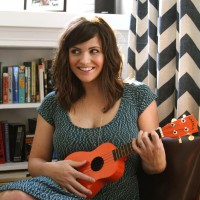 Liz Climo is a character artist for The Simpsons TV series and has worked on The Lebrons and Seth MacFarlane's Cavalcade of Cartoon Comedy. LITTLE WORLD OF LIZ is available in multiple countries and Liz’s next book, RORY THE DINOSAUR, is coming out in 2015 from Little Brown. She lives in Los Angeles and at www.LizClimo.tumblr.com.