OUR WAITRESS: Thanks for meeting me for a drink, babe. Wow, do I need it after the crazy time I had at the restaurant tonight.

OUR WAITRESS’S BOYFRIEND: What happened?

WAITRESS: These two American women came in to be seated. Mother and daughter, they looked like. I tried to seat them in the nice part of the restaurant, but a guy was smoking a cigarette at the table next to them, so they flat-out refused.

BOYFRIEND: That’s dumb. It’s not like they were going to get lung cancer over the course of dinner.

WAITRESS: I know! But I didn’t want to say anything because I was hoping they’d tip me if I was polite. You know how Americans love to tip. Anyway, I finally get them seated, and then the daughter has a million questions about every item on the menu. Like, what kind of vegetables are in the vegetable soup? Is the chicken dark meat or light meat? Is the rice brown or white?

BOYFRIEND: Why does she need to know any of that?

WAITRESS: I have no earthly idea. After I answer all her questions, she proceeds to order the one menu item that she didn’t ask anything about. Her mom orders the California rolls, only—get this—without the shrimp.

BOYFRIEND: That is crazy! The shrimp is the best part.

WAITRESS: Totally. So I bring over the daughter’s order, which she immediately tries to send back, claiming it’s not what she ordered.

BOYFRIEND: Was it what she ordered?

WAITRESS: Of course. And I bring the mother’s shrimp-free California rolls. When I come back, she has systematically picked out all the raw salmon from them.

BOYFRIEND: No shrimp or raw salmon? What the heck was left in the California rolls?

WAITRESS: Rice. And mango. I would almost think they don’t have California rolls in America, but of course that is silly, because California is in America.

BOYFRIEND: Was that the end of it, at least?

WAITRESS: Yes. Oh, except for one other thing: they kept pouring out their water glasses into these plastic bottles that they were carrying in their bags.

WAITRESS: Like, multiple times. When they thought I wasn’t looking, they actually grabbed the big water bottle from my station and emptied it into their bottles. I was totally looking, though.

BOYFRIEND: You can’t be serious.

WAITRESS: Oh, and then they tipped me three euros.

HUSBAND: That wouldn’t even cover the cost of the stolen water!

WAITRESS: I know. Ugh. Let’s do another round of shots.

OUR WAITER: What do you know about Americans?

OUR WAITER’S WIFE: They often seem to wear gym shoes, even when they are not going to the gym. Why?

WAITER: I had a baffling experience with those two American women who just left the restaurant. They ordered the bacalhau.

WIFE: Ah, yes. Bacahlau, the traditional Portuguese salted codfish that our people have been cooking for generations, since the days of Vasco de Gama. The fish which I myself have been making for our customers for nearly my entire life, using the recipe passed down to me by my mother, God rest her soul.

WAITER: Yes, that bacahlau. The Americans ordered it all confident-like, like some seafood experts. But after I brought it over to her, they tried to send it back!

WAITER: They said they couldn’t swallow it! The younger woman pointed to all these masticated white chunks that she’d hidden under the rim of her plate, like as “proof” that the fish was unchewable.

WAITER: Don’t worry, honey. I ate a bite of it myself, in front of her, to prove that it was edible.

WIFE: You are truly a supportive husband.

WAITER: And then I brought out all the frozen cod from our fridge so she could understand our process.

WIFE: I bet that showed her.

WAITER: It should have. But even then she didn’t eat another bite of the bacalhau, no matter how long I stood over her, chanting, “Eat, eat.”

WIFE: Do you think she will write a bad TripAdvisor review of our restaurant? I live in fear of that.

WAITER: I don’t think so. She seemed to really like our bottled water, so I’m sure that made up for her lack of chewing skills.

OUR WAITRESS: Seeing that homeless man outside the train station just now reminds me of these two American ladies who ordered the chocolate bread at the café today.

OUR WAITRESS’S GIRLFRIEND: The chocolate bread is AMAZING!

WAITRESS: I know, but somehow they couldn’t finish it, even though there were two of them. They only had a little bit left, but they spent ten minutes trying to figure out how to take it away with them. The younger one went through like fifteen paper napkins, trying to wrap it up. The older one tried shoving it inside an umbrella bag.

WAITRESS: Eventually I offered them a paper bag. They were super-grateful. It was weird, because the whole piece of chocolate bread only costs seventy-five cents. It’s like they didn’t know where their next meal was coming from.

GIRLFRIEND: That is so sad.

OUR WAITER: What do you think of those roasted red peppers I make?

OUR WAITER’S BOYFRIEND: I don’t know, they’re pretty good. Nothing like your bacalhau, of course, but yeah. Why?

WAITER: At the restaurant these two American chicks were almost crying over how good my roasted red peppers were. It was as if they had won the lottery. “These are the first vegetables we have had in a week,” they said to me. (In English, of course.) “We had nearly forgotten what vegetables taste like. You have saved us.”

BOYFRIEND: Oh, come on. They did not say all that. You are such an exaggerator.

OUR WAITRESS’S HUSBAND: Hey, hon, how was work today?

WAITRESS: Seriously fucked-up. The women staying in Room 242 kept going back to the breakfast buffet.

HUSBAND: So? It’s an all-you-can-eat buffet; everyone goes back multiple times.

WAITRESS: But they weren’t going back for more of those mini-sausages, like everyone else does. They kept going up and refilling their glasses with water. Then they’d return to their table, empty their glasses into bottles from their purses, and then they’d go back up to refill their glasses again.

WAITRESS: They did this four times in a row.

HUSBAND: I suddenly don’t understand how their nation holds such a strong geopolitical position. They’re on the U.N. Security Council and everything.

WAITRESS: It’s all so hard to wrap my head around. I feel like I have watched a great deal of American TV in my life, but somehow two hundred episodes of Friends did nothing to prepare me for the encounter I had today.

HUSBAND: I hope they made it back to their home country without dying of dehydration.

WAITRESS: I guess we will never know. 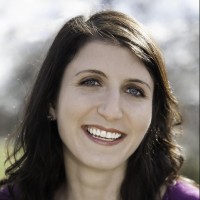 Leila Sales is the author of the novels This Song Will Save Your Life, Past Perfect, and Mostly Good Girls. She lives and writes in Brooklyn, New York. Follow her @LeilaSalesBooks.