Nope, not the stuff colonizing the fruit drawer of my fridge. That’s a personal problem, thanks.

Let’s talk about Physarum polycephalum, a slime mold (pictured right), which is incidentally not a mold but a member of kingdom Protista (kind of the taxonomic island of misfit organisms). Physarum is a gelatinous yellow decomposer which, though it’s single-celled, can grow to up to several square meters. Also, it’s smarter than you.

That may be hard to swallow. Physarum has no specialized tissues, and nothing like a centralized nervous system. On the scale of complexity, it’s barely two bilipid membranes beyond the prokaryote. You, by contrast, basically define the complexity scale, at least cognitively, with the fanciest computer evolution has yet produced ticking away inside your skull. But put aside your hominid hubris for a second.

To begin with, for an organism without specialized chemical sensors, Physarum is really good at healthful eating. Consuming mostly fungal spores and microorganisms in nature, it’s pampered with oat flakes (actually, the bacteria on oat flakes) in lab experiments. It forages by extending a network of tubes from its blobby body, then engulfs food sources. Given multiple sources containing different nutrients, Physarum balances its diet expertly, maintaining different amounts of contact with each source so that it gets precisely its required combination of nutrients. As someone who routinely inhales a pint of Chunky Monkey and calls it dinner (because, you know, bananas are pretty healthy?), I’m already impressed.

Physarum doesn’t just eat well, it’s also efficient. In environments with multiple food sources, the slime mold consistently forms the shortest possible connections between them. If the environment is unevenly lit, the organism alters its shape, settling on slightly longer paths—called minimum-risk paths—that balance the extra length with avoidance of light (which Phsyarum hates). The slime mold can even solve mazes to find food. Given enough time, it will forage the entire maze till it finds the food source, then gradually get rid of the dead-end tubes. If there are multiple solutions, those are pared away, too, until only the shortest route remains.

Mazes are fun, but Physarum’s propensity for efficiently distributing nutrients throughout its body also enables it to solve certain classes of math problems. In particular, it’s quite good at graph theory, a branch of mathematics where problems are represented spatially, as dots (nodes) connected by lines (edges). (Remember that class Matt Damon secretly aced while he was mopping the halls of MIT in Good Will Hunting? That.) It looks like connect-the-dots, but graph theory is pretty serious business; as the number of nodes increases, the complexity of the problems gets quickly out of hand. Physarum is a particularly helpful study buddy here, especially for optimization problems, where the goal is to minimize the total lengths of the edges in a graph: if you represent your nodes as oat flakes and consider Physarum’s veins your edges, its goals—quick, efficient flow of nutrients—are perfectly aligned with yours.

Graph theory is applicable to all kinds of real-world problems. Take transportation infrastructure, for example: given the layout of the cites in a particular region, how do you build the most efficient network of roads or railways between them? Using oat flakes to represent population centers, experimenters have built maps of several different regions and unleashed Physarum on these miniature cities. Physarum eventually grows a network of veins connecting the different food sources, in a pattern that’s almost identical to human-designed rail and highway systems.

Scientists think Physarum arrives at these solutions due to the rhythmic pulsing of its outer membrane. When the organism gets large, the pulses in different parts of the organism tend to get out of phase with one another, pushing its gooey guts (cytosol) through it in streams. Streaming usually happens between the regions engulfing food sources, possibly because regions in contact with food speed up their pulsing, and tubes generally form along the direction of this streaming. In environments with multiple food sources, the combined membrane pulsing and cytosol streaming throughout the organism eventually results in an optimal or near-optimal configuration of veins connecting the active blobs. Each individual piece of Physarum’s membrane functions by the same simple rules as any other, so control over its shape and mobility is distributed over the entire body.

The dynamics of its decentralized control give it some adorably anthropic behaviors, too. Like, if Physarum is sliming along down a narrow path, and suddenly there’s an unsavory stimulus (like light) in its way, it will actually sit there and wait for a few hours before “deciding” whether to continue through it or turn around. And it’s susceptible to the very human speed-accuracy tradeoff: under stress of starvation, it makes faster decisions about which food sources to approach, but it’s more likely to screw up (i.e., to pick a lower-quality food source) the faster it chooses.

So, can we call this slime mold’s behavior a kind of primitive intelligence? Scientists who study it are careful not to overstate this—Andrew Adamatzky, a professor at the University of West England who studies the organism, compares its behavior to that of “a stone rolling down a hill (the stone “chooses” the shortest path).” It’s just obeying a set of simple biophysical laws.

But Physarum happens to be built in such a way that when each part of it follows these simple laws, locally, complex behavior emerges from the whole organism. And really, on a much grander scale, so do our human brains. Without underestimating the vast jump in complexity between slime molds and humans, consider that your whole brain is made of more or less the same stuff as Physarum polycephalum (and, for that matter, many rolling stones): carbon, hydrogen, nitrogen, oxygen, phosphorus, sulphur, combined in precisely the right way, form each one of your neurons. Following simple biophysical laws, neurons occasionally send little electrical pulses running down their long appendages, after which, following more simple biophysical laws, these pulses are passed on to adjacent neurons. These electrical pulses are called action potentials, and they’re the fundamental medium of information processing in the brain; every thought, feeling, and idea you’ve ever had has been the result of some combination of action potentials generated by neurons following a set of simple biophysical laws.

Let me try to cover my ass here, scientifically, and reiterate that, for most purposes, humans are way, way more intelligent than slime mold, despite its savant-like graph theory prowess. There will never be a worldwide protist takeover (which, thank God, because, gross). I’m just saying there are similarities, in the abstract, in the ways that human and Physarum behaviors arise, from the meticulous organization of simple materials following basic biophysical laws.

But since it’s so good at solving specific kinds of problems, scientists are finding ways to put Physarum to good use by integrating it into computers and robots. Its actual growth occurs too slowly to be very helpful—it can take days just to solve a maze, for example—but it begins responding to stimuli immediately, by adjusting the frequency of contractions along its membrane. So you can measure the frequency of the pulses (or correlates like membrane thickness or the flow of charged ions in the cytosol) to find out what Physarum’s “thinking” without waiting for any significant changes in its form. Its aversion to light, for example, has been applied to robot control: in 2006 scientists from the University of Southampton, UK, and Kobe University, in Japan, cultivated a star-shaped Physarum and wired it up to a six-legged robot. Whenever light was shone on one point of the slime mold star, the change in its membrane powered a kick of the corresponding robot leg. Hence a light-avoiding robot, controlled by a pre-programmed, self-repairing processor.

More recently, Adamatzky’s lab has built Physarum logic gates, basic processing units that, if you hooked a large number of them together, could form something like a conventional computer processor, with the flow of cytosol through the Physarum veins analogous to the flow of electricity through silicon transistors. The same lab has also built a Physarum chemical sensor, taking advantage of its unique responses to different substances.

In fact, just in case you’re starting to feel jealous of Physarum’s computing power, Adamatzky even imagines a future where we all wear slime mold on our skin, shunting off some simpler computations from the brain and freeing up our gray matter for more advanced processing. I hope they figure out how to dye it blue so I can go full-out Na’vi. 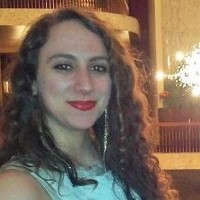 Elizabeth Cutrone is a PhD student in New York, NY, studying computational processes in the human visual system. She's also a TV addict, Happy Hour Czar, and amateur everything. She blogs at elizabethcutrone.com and tweets wit and wisdom at @_elizabethkate.