How To Tell If You Are in an Essay on Adulthood

You love Don Draper, but at the same time you’re glad patriarchy is dead. It was a tough fight, and when you watch Don Draper you can see that he understands this too— both the love, and the complicated gladness.

At patriarchy’s funeral you were the one who laid a wreath on the coffin, and it was you who brought coffee to the grieving widows. You offered your shoulder and tried to be strong. You worry now that they may not have noticed.

You realize that how you view adulthood must have been shaped by something. Maybe that something includes race, sexuality, religion, ability, class, gender identity… maybe more. This is why you invite others to share the ways they deviate from you.

Other people are ALWAYS welcome to add their thoughts. You are only starting the conversation.

You realize that it’s too soon after patriarchy’s death to speak about progress.

You dream that the founding fathers are boys like you. Exactly like you. You find them playing in a tree house, and they yell: “Come! We’ve built a whole country in your image!” When you look, their country is a fort, or a raft, or an abandoned mine…or a railroad track and a sandwich.

In another dream you’re shaving. You ask your reflection: “Who’s the most important of them all?” and your reflection answers. It tells you about being in charge—about blood, and ruins, and forcing. It says you were never in charge to begin with. But when you wake up, you remember only Huck and Jim, on a river.

The night after your dreams, you watch an episode of Breaking Bad. Someone in the world understands.

On television, you see a boy’s dead body left in the sun. You see a black man, facing long lines of white police officers. Weeks later, you are anxious but you’re not sure why. It could have been the burrito you ate last night. More likely it was the white dude you just saw on his scooter, wearing sandals and a Pac Man t-shirt. You know he was pushing too hard. Somehow, though, it feels like things are slipping away.

You write essays about the cultural impact of feminism, and do not quote feminists.

You think feminism, patriarchy, and childhood are each one thing. Except for patriarchy. You were there at the funeral.

You feel as though you’ve lost something, but you’re not sure what. It’s possible the thing once belonged to you. If so, it was like keeping a secret world in your closet. You worry, though, that it was something promised and then never delivered. Thinking about it now, you’re fairly certain what you miss is like a scraped knee. Or like a knee that’s never been scraped. Or maybe, it is like Humphrey Bogart’s jaw.

Things made by people who aren’t like you make you nervous.

You spend 12 years watching a movie about a boy like you. You imagine that, like him, you only dated models in high school. In fact, you can still remember them—how they used to murmur as you explained that CDs aren’t REAL, not like records and tapes are real, and if that’s true maybe nothing is real, you know? They smiled, and whispered: “go on.” This was before they took up with football players— before you realized they’d been wrong the whole time, despite the modeling. Was that what you lost, then? The innocence?

You sort of hope there will be a Mad Men reunion show. It could be set now, in 2014, because even though reunion shows never capture the magic of the original, you do wonder how Draper would judge President Obama’s second term.

You do not understand Beyonce, but you’re glad other people have someone they think is important.

You remember a time before women wore hair clips. It was a gilded age, but even you admit the gilt sometimes flaked. Really, who can blame women for discovering the fort, or for wanting in once they saw it. You just wish they’d thought it through a little better. If everyone’s here, who’s left to call you for dinner?

When you can’t sleep, you remember the ways you were never in charge.

You like children, but sometimes it feels as though they’re playing monkey in the middle. They keep tossing a ball over your head, and a man who looks like Cary Grant throws it back. You only catch glimpses, but you’re pretty sure the ball is the thing that you lost.

If they would only hold still, you could get it back.

You wonder if Louis CK will be the next Don Draper. Louis is even more like you, because he is like you watching Don Draper, if Don Draper knew you were watching. Louis is the madness and the sadness and the badness all mixed together, and he is also a feminist. So maybe there is still hope. 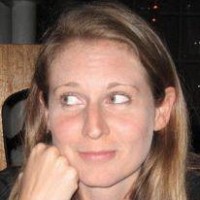 Sarah Hamburg received her MFA in writing for children and young adults from Vermont College, and served as Children's Writer-in-Residence at the Boston Public Library. Her work has appeared in the Horn Book Magazine.