Thorns in My Throat: Writing Through the Scars

I was so young when they took my tongue away.

They needed no scalpel to silence me, only the sharp edge of their judgment.

The worst part was, I let them.

We’ve all read stories about changelings, how they’re replacements for the true human children who will ultimately come back to their victimized families. No one wants the changeling; when it’s not a piece of wood, it’s a demonic creature that must be driven out with a hot poker or tossed onto a roaring fire. Brutal stuff, but that’s how the story goes.

Everyone wants the child that knows how to be human: what to say, what to do, how to be.

But what happens when you’re the changeling? Or to put it another way, child of two worlds, ill-suited to either, where do you belong?

How do you feed that part of yourself deep inside, the one that’s always hungry?

“You should get some blue contacts, and you’d be less ugly. You go to the tanning salon every week to get that dark, don’t you?”

I am brown. My features are very telling; you’d know I’m of South Asian descent the second you saw me. Everyone always does.

Some first-generation desis see me on the street, guess I’m from India, and try to force conversation, as if our shared skin tone is an instant bond. What does my husband do? How many kids do I have? Non-desis will often ask me weird questions or also insist I must not be from America, never mind that I was born here. I’ve been followed in stores and had my ability to speak English questioned. I’ve been told my name is too hard, and I should go by “Sue.” (Hard for whom, I want to ask.)

I always wonder who actually sees me.

I remember when I first found Tanuja Desai Hidier’s young adult novel Born Confused. It was 2002, and I snatched it off a book exchange table before it could turn out to be a mirage. Finally, a book about a girl like me! I could relate so much to Dimple’s parents’ particular brand of criticism and demands and Dimple’s own burgeoning interest in her inherited culture while not giving anything else up.

Except Dimple went on to find a place in both the desi and non-desi realms of her life. I never did.

I could stop being desi right now in all but name and appearance if I wanted. Nothing in my life demands it of me, and that absence stings. I want a whole group of friends to celebrate Deepavali and Holi and go to mandir with. I want a myriad of reasons to drape myself in a sari and fancy jewelry. I wish I had a local community full of people who loved geeky things but also celebrated our heritage. I wish I knew many non-desis who got why Indiana Jones and the Temple of Doom is such a racist movie without me having to explain. I especially wish it was clear to everyone that brown people aren’t Middle Eastern by default. I wish, I wish, I wish . . .

I know some—many—people already have all that. The world is a rich place, populated by a rainbow of individuals. But I need to find the ones who get me, on depressive and sunny days both, who get my faith in magic and social justice and potent goddesses and my love of crafting and whimsy and the fact that I wear bindis and my desires to read all the wonderful fantasy novels ever and better my Gujarati. And that’s a tall(er) order to fill.

“Hey, you, you have something on your forehead! Ha, ha!”

It was a lot easier to let them take my voice than it should have been. But when everyone in your tiny Midwestern farm town is telling you how ugly and weird you are, not to mention how stupid, you start to believe it. High school seems like the entire world until you get out of it, because where else can you go? What refuge do you really have?

You want to survive. You want, especially, to belong. To be liked and wanted and part of a group. You want to be asked out and confided in. You don’t want to be the weird girl everyone makes fun of and throws things at on the tennis bus. You try hard to get the others to include you, which they never do, not even the nicer ones. To them, you’re sad and pathetic, not to mention weird. You know this, because they tell you so. Dark skin, strange name, bizarre ideas about how things work, remember?

So you stop talking, or else you start talking too much, but the things you’re saying—they aren’t what you really mean. They’re not you. Somehow the others took your tongue and replaced with it with the words you think they want to hear. You babble and babble—you vomit words; you don’t know how to stop—and you secretly dream of being white, because then you’d fit in. Then they’d love you, right?

You even stop going by your given name.

But aside from leaving you even more famished and sad and lost, none of it makes any difference. You still end up on the outside, and your heart’s still scarred.

I get tired of fighting for diversity sometimes: the same old “devil’s advocate” arguments; the profusion of smug, unquestioned privilege; the lip service to change but lack of real commitment; the denial of problems both on the systemic and personal levels. People seem to think having to say the same thing over and over and still being ignored is fun. It’s not. It’s exhausting.

Casual racism is bad enough, but the general disregard for making room for the rest of us sucks me dry. It steals not just my breath, but the words I would have spoken, the stories I would have told instead. I think most of us would rather never have to think about these things.

I know I would.

In my twenties, when I started to notice the problem of terrible representation and erasure in media, I started to regain my voice. Because whether or not anyone listened, I had things to say. At first I stumbled, but eventually the words burst forth from my heart. I began to speak, and I began to write.

It hurts. It hurts so much, to have to argue again and again that I matter, that we all do. It wrings out my heart, then shreds it. I choke on the pain some days, a briar patch in my throat. I want to hide under blankets and vanish. My efforts feel pointless, the proverbial drop against the entire ocean. My stories, my struggles made text, might well spend their existence on my hard drive.

But we all keep up the activism, the speaking, the writing, because how else can we change the tide? Petition the moon to adjust its gravitational pull?

When I write, I have no desire to plumb my characters’ angst about being brown; I want their skin color to be taken for granted while they go on fantastical adventures. If those adventures can include Hindu and Buddhist mythology and folklore, so much the better. We need those. But I’m not sure why I need to keep explaining that such a book would not be niche—that in fact, I am not niche?

“Get out of here, Taliban!”

Loneliness is like a vine; it creeps in and entwines itself around you until you can’t breathe anymore.

I don’t want to be a changeling. I want to be a nagini out of Hindu and Buddhist lore, a powerful being able to shift from human to snake to in-between forms. I want to slither and undulate my scaly, serpentine tail and flash my fangs and hisssssssss my sibilants at passersby. I want to be able to slip in and out of all my aspects and have each one fit. I want to belong everywhere I wander because I decided I do. I want to write and sell fiction that takes all kinds of people into magical places born from my imagination and allows them to experience things they’d never considered.

Most of all, I want that to be normal.

A vine can be nurturing, too. It’s a plant, and it can contain many flowers, linking them together. It can remind us that lonely does not mean “alone.”

I won’t lie; I’m still afraid. I’m afraid no one will want my words, that no one will care what I have to say. That I am always going to be too weird to understand other people, and that they won’t be able to relate to me. But for all that, I’ll keep writing. I’ll write because even if I can’t always see the results, my voice matters, and I’m not letting anyone take it away ever again. 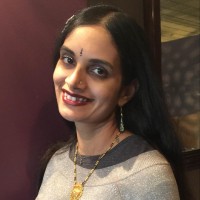 Shveta Thakrar is a writer of South Asian-flavored fantasy, a social justice activist, and a part-time nagini. When not spinning stories, she makes things out of glitter and paper and felt, devours books, daydreams, bakes sweet treats, travels, and occasionally even practices her harp.