The Toast’s previous coverage of trans* issues can be found here. This post was brought to you by “a fervent believer in the matriarchy.”

It’s the dipping point of a late July sunset, and my roommate (and hetero life-mate) Seth and I are walking to meet some friends at a bar. We are both wearing wonderful snapback hats and Seth’s hat has large, O’Keeffe-worthy flowers splashed all over it and mine is a distinguished sparrow gray that perfectly frames my new haircut, shaved so close on the sides and back that I can feel the sunset behind my ears. And we look so goddamned handsome that I want to link elbows with him and find a boardwalk to stroll down. I feel handsome because I’m wearing my favorite shirt too, the one where I can roll up the sleeves ever so slightly to show off the muscles that can now support my full body weight (I work out every other day now, and I can plank for two full minutes and I tell myself that this is metal as fuck because it is.) This peach plaid shirt cuts a fine figure—I like living my life in this shirt. And it just looks so perfect when I wear my binder underneath. I’m also wearing my binder, because of course I am. I’ve been wearing it every day for the last three months, and my body makes sense to me this way.

Seth and I pass the parking lot of a convenience store, but not before the back end of a car juts out in front of us; the man in the backseat has opened the windows just in time to scream. At me, because of course he’s screaming at me.

“GIRL! GUUUURRRRLLLL! BLONDAAAAAAAY!” He can scream and smile at the same time. He had something he really needed to share.

Among the many names/nouns/adjectives that have been yelled, cooed, barked, and typed at me in the past six months, this encounter is benign and I can laugh it off. I am still so goddamned handsome.

Earlier this evening, I walk to the corner store with Ryan, my other roommate, for beer and candy bars. I’m wearing my binder, my perfect sparrow gray hat, my old leather jacket, my scuffed boots. We pick up what we want, and I don’t like the cashier who’s on tonight. He always holds eye contact a little too long and calls me “miss” in that passive-aggressive tone one usually reserves for mothers and clergy. He hisses it at me every time I see him, and I never hear him say it to other gals in the store. I’m not a gal, and I think that’s his point. I don’t like assuming that; I don’t like feeling paranoid about a kid with a patchy neck beard misgendering me. I decide tonight that if he calls me “miss,” I’ll give him some shit about it. Not the river of shit I’d prefer, but enough to let him know I’m onto the fact that he’s a jerk-off.

“$18.55, missssssss…” He cuts his eyes at me, like a cat that climbs up your curtains RIGHT IN FRONT OF YOU and looks back at you like, “Look how high I got!”

“You know, you call me that every time I’m in here,” I say evenly, handing him my card. He swipes it and drops eye contact, says kind of sniffily, “What of it?”

He hands me back my card and he starts to laugh in a way that makes me nervous.

If that sentence had been a snake it would’ve bitten me. He looks at me after he says it, kind of surprised, but mostly disappointed. In me. Look what you made me do. I am agog. And while “agog” is usually a cute look for me, I just leave. Ryan and I walk home in a near-silence that’s only interrupted by him saying to my back, “Jesus! What was wrong with him?”

Here’s the thing: this summer, men have really taken it upon themselves, sometimes in groups, to Tell Me Things I Need To Know And/Or Fix About Myself. Those sweet princes!

This isn’t a new phenomenon (thanks, Weird Sweaty Boy In The Chevy Corsica who made sucking sounds at me while I walked home from MIDDLE SCHOOL, you’re a prize piece and I hope no one ever invites you into their home for dinner or snacks or even if you really have to use the bathroom), but the sheer volume of instances from this summer is pretty staggering.

When it does happen, I try to actively refuse thinking about it in any framework that would place the burden of legibility entirely on my shoulders. Many of these encounters are so public, and necessarily so: when you’re speeding past my walking body on the sidewalk, you can say what you want to me—at me—I cannot catch up to you. What would I do, if I could? Proximity is key here, but for you, it’s important only in its flexibility. You have to be close enough to let me know I’m being looked at, and you have to be far enough away to end the encounter on your terms. This intimacy is violent precisely because of its one-sided flexibility–I don’t get to restrict access, I get to be accessed.

I know that my body invites commentary, almost as if the cat-caller needs to shout so loud in order to make my body legible—if he can say something about it, that’s a step toward locating my body in a rubric he’s familiar with. But when it’s happened to me this summer, I just wanna be like, “Dude. IT DOESN’T MAKE SENSE TO ME EITHER, and you’re not helping.” What frightens me the most is the palpable shift in proximity. At this point, you don’t have to be in a car to feel confident in your capacity to Tell Me Things I Need To Know And/Or Fix About Myself. You don’t have to be walking by me on the street or passing me in the bike lane. You can be behind the counter, selling me my beer. But you know, you can actually get closer than that. If I could place the people in my life in a set of rotating, undulating concentric circles, there’s just as much bullshit in the inner rings these days. I don’t draw lines of equivalency between the different types of bullshit I’ve encountered—watching a dude in a truck push a tongue through his split fingers at me is far different from a pair of hands pushing my forehead into a wall. I don’t want to flatten out the variations. Things just feel especially close now. I feel bound, funnily enough.

I love my mother, and I’m lucky that I do. Because I love her, I cherish her and I try to listen to her and I forgive her, even when she puts water in her ice cream (but SERIOUSLY THAT IS NOT A THING MA, PLEASE STOP PRETENDING THAT “Water makes it crunchy!” IS ANY TYPE OF VALID EXCUSE FOR THIS BEHAVIOR. ALSO WHAT ARE YOU TALKING ABOUT.) When I first told her that I’d starting binding, and was beginning to think about what “trans” might be like for me, she came over to my house and reacted in a way that made sense to me. I answered the door; she noticed my binder; she winced. She came inside, and asked to borrow one of my shirts (she had to change for a concert because she’s a singer AND a lawyer AND how baller is that) and we talked for a bit about my binding and she mostly said, “I love you. I don’t care about the rest of it.” I believe that. But there are other things behind that conversation that are getting closer to me now.

I’m Facebook friends with my mom. Usually, this is fine! She reposts a lot of cartoons from the New Yorker and memes about being an Italian mother. This afternoon, I scrolled through my feed on my phone and saw that she’d posted what looked like an X-rayed picture of a ribcage, ostensibly female, twisted and pinched into an hourglass figure. The picture was attached to an article, titled “Vintage X-Rays Reveal Shocking Extent of Corset-Imposed Body Deformation.” My mother’s caption: “a word to the wise (you know who you are and I share this because I love you.)”

Just below her, I saw that my mother’s husband posted this article first. His caption? “Food for thought about forcing your body into a shape other than what it actually is.”

And there it is again! The snakebite! Binding is actually not at all like wearing a bone corset from the 19th century, but THANK YOU SO MUCH FOR YOUR CONCERN. I didn’t even have to ask you!

The circles move and fluctuate, and proximity is important, but only if it can be flexible for you. You can get close enough to me to let me know I’m being looked at, and as for being far enough away? Well, that part’s optional, right? Hasn’t it always been?

I try to remember and acknowledge the difference, the degree, the proportion of stuff like this: it feels intimate, and aggressive, and small.

I am still so goddamned handsome. 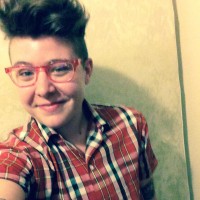 Claire Greenlee Brown is a queer trans doctoral student currently living (and snuggling) in Buffalo, NY. Her gender identity fluctuates between "Brienne of Tarth" and "baby bear." She is fine with this.