How to Suck at Queer Allyship: A Case Study

Say you’re this straight guy. You’re an artsy, liberal-minded type, employed in some capacity by the music industry. You live in Brooklyn. You have a beard. You get laid with relative regularity. You think you are very, very cool.

On a summer Sunday night, you’re on a rooftop bar in Williamsburg, and you’re three gin and tonics deep. You’ve met up with a friend of yours from work and some of her friends. You are altruistic and charming, so you buy everyone shots of Jameson, then teach them all your favorite toast: “Here’s to pussy and gunpowder; one brought me into this world, the other will take me out, and I love the smell of both.”

“We can make up a version involving penises, for the ladies,” you offer. You’re generous like that.

Your new acquaintances laugh; someone explains that two of the women you’ve just met are gay, so for them, that won’t be necessary.

“Oh, that’s awesome,” you say, backtracking. For a moment you’re thrown off, perhaps because it’s hard for you to remember that there are women out there who—for any number of reasons—are not the least bit interested in sleeping with you.

But you recover. Now is your chance to demonstrate your ultra-hip literacy in queer progressivism. You bare all: you tell the crowd about how, when you were fourteen, your mom started a relationship with a woman that lasted a few years; at first, you were really pissed off at her, worried that the kids in school would find out and make fun of you, but eventually you threatened to beat up anyone who talked shit about your mom, because she’s, like, your mom, and you love her.

Encouraged, you veer into full-blown poetic territory: “You know, it’s just like, love is love, man. Love should be, like, the right of every single human being. Who cares about gender. And anyone who doesn’t believe that, I mean, fuck ’em, you know?”

You notice the two women—the lesbians—sitting across from you are smiling at each other behind their hands.

One of the women tells you it’s great to see you standing up so passionately for the queers. “Please accept a gold star for your efforts,” she says.

The woman is smiling, but you are not smiling.

She smiles again, and shrugs. “So I’m catty. It’s funny to hear straight people explain my own cause to me.”

You grab onto your fourth gin and tonic, to anchor you. “Hey, my mom dated some other lady. I just told you all about it. How much closer can you possibly get to the cause than that?”

Your new conversational adversary across the table isn’t smiling anymore. “Oh, I don’t know,” she says, “maybe actually being a queer person.”

“Listen,” you say—sloshing your drink, throwing your fist to your chest, unable to accept that this is a conversation in which you may not belong, your anger building like a tide—“Listen. I’m getting pretty pissed off. Here I am, offering my support. And, you know, there is a total other side to all of this.”

The woman laughs, joylessly. “You mean, a ‘side’ that drives queer teens to suicide, keeps a huge proportion of us in poverty, denies us marriage and adoption rights, and condemns us to hell? That sort of side? No, I had no idea. Please do tell me more.”

This woman is continuing to make jokes at your expense, and it enrages you. You were teased in high school because of your queer mom—the way you made fun of other kids who occupied marginalized spaces, before you found yourself on the outskirts of one alongside them—so, in your mind, you are The Victim. You can’t possibly imagine anyone else being victimized in different, more profound ways directly tied to their own bodies and identities. You believe you have the right to speak longest and loudest about this topic, without question or critique.

“Well,” you say, projecting your injured ego across the table and dumping it, soaked in whiskey and gin, upon this woman’s lap, “Well, I could just as easily be a part of that side if you don’t want my support. By acting this way, you’re allowing that other side to exist. People won’t stop hating gay people if this is how you treat the people who actually support you.”

By now, everyone else at the table is looking at each other, trying to figure out how to stem the bleeding from an otherwise perfectly happy and healthy Sunday night. And the woman from whom you have just threatened to revoke the right of human respect and dignity asks you: “Are you saying I’m responsible for my own oppression?”

“Because I sometimes make jokes that disparage straight people?” she clarifies.

The group at large then wrestles the conversation away from you. Debates when you’re drinking are never a good idea, we’re all friends here, and all that. You quickly calm down enough to ease yourself back into your carefully constructed persona of friendly, funny, aloof Brooklynite, secure in your beliefs and your beard.

By the time the night rolls to an end, you may forget the confrontation entirely. You can box up your sense of victimhood until the next time you have to pull it out in a socially-conscious crowd, like a party trick. But in between, there’s no real need for you to actively consider the plight of queer people, or your role in helping or hurting the cause about which you purport to care so deeply. For you, there exists a simple binary of being either For Gays or Against Gays; you believe you are owed glorified recognition for your self-ascribed membership to the former, though you can always consider swapping to the latter if a lesbian (who may or may not be the author of this essay) ever pokes fun of you at a bar. Thank goodness that if your feelings ever get too hurt, you always have that option. 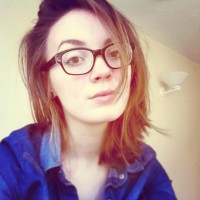 Shannon is a queer feminist writer of fiction and media criticism. Raised in Connecticut, she has just moved from Paris to New York City. She'll let you know how that goes.