“Brown and Queer in America”: On Being a Bridge

The first time you realize what life is going to be like now is when you tell your white (lily-white diamond-white snow-white) therapist about your brother. About how, when you asserted (with the shaky confidence she’d sown in you) that there wasn’t gay and straight and bi, really, that “it’s all on a spectrum,” he had arched his eyebrows, indulging his PC lefty academic baby sister, and said, patiently, “I don’t know if it is.”

She will look at you with a horror she can’t conceal, incredulous that a modern human would question such an obvious and morally defining truth. You see her trying to figure out what kind of person your brother is. And you backpedal, immediately, because you don’t want her to think he is one of those people. It doesn’t occur to her that there might be civilized people out there who don’t inherently accept what, to her, is a given. And for some reason, you still need this white woman to see that you and your people are civilized.

That’s when you realize that now, even more than before, you will have to be a bridge. There will be even more worlds that you’ll have to explain. You have already spent your life explaining your India to your America. Explaining to your white friends that your parents did have an arranged marriage, but that it doesn’t mean what they think it means. Explaining to your Indian relatives why it isn’t the worst thing in the world if people give toasts at those weddings in which they talk about how much they love each other. Explaining to your mother that you were invited to your first boyfriend’s mother’s birthday party even though you weren’t engaged. You’ve always felt like this was your superpower, because you’re the only one who can see how all of these things are equally normal. Only you can be the lens through which everyone else can see each other clearly.

But now you know that when you are both brown and queer in America, you have to interpret for everyone — your liberal straight friends from your old life, your queer friends from your new one, your pragmatic family that believes you can think your way out of any uncomfortable taste or tendency if you try hard enough. You’ll have to be the lens through which “progressive” America, where you learned to think, can view the “traditional,” “conservative” culture you come from — you know the one, where Hijra is a gender you can put on your I.D. card, and you’re named after a female incarnation of a male god — and vice-versa. It doesn’t feel like a superpower anymore; it feels like a burden you do not want to bear.

What else can you do? Your brother will never read Audre Lorde, or any of the other queer women of color you’ve picked up in an attempt to research the shit out of your new identity. And you can’t really blame him, because you recognize that while Zami: A New Spelling of My Name makes your heart beat faster every time you read it, she doesn’t seem like someone you’d like. You would be embarrassed to suggest that he should, because then he would think that you have become one of them — one of those humorless pretentious northern white girls who went to a private university and hates rap music and says things like it’s a pity you know, that Ludacris is so offensive when he’s actually very smart!

You’ll realize that what underscores your own internalized homophobia is shame, shame not just because you were queer but because you felt shame about it. What woman who has read as much bell hooks as you have would ever be more than overjoyed to discover her own interest in women? You realize this is why it’s taken you so long to tell all your straight girlfriends, who hug you and say “Get it, girl!” when you explain that you’ve decided to date women even though you were almost engaged to a man three months earlier. You pretend this is a thought that just kind of occurred to and delighted you, like a butterfly that has lazily lit upon your finger. You don’t tell them how hard it is to admit it, even to them, these supportive darlings who would cheer you on if you announced you were joining the IDF. You do you, girl!

It’ll take you a while, but you’ll go forth, because like Audre said, you’ve got acts of political warfare to commit. You’ll feel like an amazon when you create a screenname on OkCupid that has the word “bisexual” underneath it. “I have arrived, lady-loving ladies of the internet!” you will say to yourself. “You may commence fawning!”

…But they won’t. In fact, they probably expect you to do that now. You’ll realize that while on straight OkCupid your love of remix to ignition made you goofy and self-deprecating, on gay OkCupid — where everyone is quoting critical theorists in their “about me” section and seems really into astrology — it just makes you sound like a fratty douche who’s really into the music of a rapist.

After a week of radio silence and your own failed attempts at fawning, a really cute girl (cute girl! you can say that now, you budding bisexual woman you!) will message you, and you will get so excited because she seems like someone just like you (See, Mom, she’s normal, so I must be too). And then, in an attempt to relate to you, she will ask, “Are you from India? I’ve read a lot about Hinduism, I think it’s so cool. Have you ever read autobiography of a yogi?” Which, in case you were wondering, is just about the worst way to hit on a brown woman. Ever. 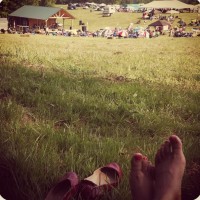 Mona is an aspiring academic living far away from home. Please send her green salsa.