It’s a little-known fact that various literary heavyweights (and Ayn Rand) once tried their esteemed writerly hands at penning pulp romance novels. Certain great works of fiction and the occasional piece of non-fiction actually had their first incarnations as Mills and Boon-style sagas replete with winsome heroines (well, aside from Stephen Crane’s The Red Badge of Coitus, which proved to be a commercial flop due to its awkward lack of any heroines at all) whose bosoms heaved in various states of lust, uncertainty, and—when pickings were slim—boredom.

Here, for the first time, we reveal the raunchy reading list of the carnal canon:

Can the lovely Lady Brett Ashley help Jake become the lover she needs him to be? Will the couple’s romantic Spanish getaway make Jake feel like a real man again?

The Age of Losing her Innocence by Edith Wharton

Ellen could have any man she wanted—so why has she fallen for Newman Archer, the handsome lawyer engaged to marry another, conspicuously less attractive and interesting woman? Will Newman choose true love over duty?

Of Mice and Members by John Steinbeck

The lissom but lonely wife of a California landowner has her life turned upside down by the presence of a rugged but sweet ranch worker named Lennie. Does she dare to follow her heart? And can Lennie really give her what she craves?

We Have Always Loved in His Castle by Shirley Jackson

Merricat has always felt like an ugly duckling. Things finally seem set to change with the arrival of her charming cousin, Charles—but will Charles’s heart be won by Merricat’s beautiful sister, Constance? Only time—and possibly sorcery—can tell.

The Red Badge of Coitus by Stephen Crane

Dashing young soldier Henry Fleming is determined to prove his virility both on and off the Civil War battlefield. There’s just one problem: there are absolutely no women in sight. What’s a man to do?

A Womb of One’s Own by Virginia Woolf

Virginia wants it all: a fulfilling career, a handsome husband and a brood of beautiful children. But can she really have everything, or is she simply destined to dream from the confines of her elegantly decorated but emotionally sparse studio apartment forever?

The Beau Jar by Sylvia Plath

In 1960s New York, a smart and sassy magazine intern is forced to make some tough choices about matters of the heart. Does she really have feelings for her fiancé, Buddy? Can their relationship survive her mental breakdown?

Stunning businesswoman Dagny Taggart is struggling to keep her grandfather’s railroad company afloat, so the last thing she needs is a romantic complication—but that’s just what she gets when she meets strapping self-made men Hank Reardon and John Galt. Can she choose between two lovers?

Lady Ann Smiley is beautiful, privileged … and bored. When her husband, the stately but troubled intelligence officer George Smiley, exposes her affair with another man, her happiness hangs in the balance. Whom does Lady Ann truly love?

The Catcher of Her Eye by JD Salinger

When Sally Hayes agrees to go on a date with an old flame, the suave but self-destructive Holden Caulfield, she remembers all that she loved about him—and all that she couldn’t stand. Can Sally save Holden from himself, or is it too late?

A Confederacy of Desire by John Kennedy O’Toole

Since the day that minxy Myrna Minkoff met eccentric Ignatius J. Reilly, sparks have flown—but can this unlikely pair ever see past their differences and find true love … in each other’s arms?

Lust in August by William Faulkner

Gorgeous Lena Grove is pregnant and alone—but she’s determined to find the father of her unborn child. But when strong yet silent Byron Bunch falls in love with her, the future is suddenly even more uncertain. Will fate guide Lena to make the right romantic choice? 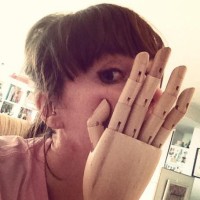 Carody Culver is an Australian writer, editor, and bookseller. She favours food, feminism, and fashion and is ambivalent about alliteration. She occasionally remembers to tweet from @carodyc.