Night Terrors: On Sleep and Anxiety

Alice Bolin’s previous work for The Toast can be found here.

I had my first recurring nightmares in preschool. They involved the witch from Disney’s Snow White waiting to snatch me in my laundry room. Sleep is a major mindfuck for most children. I was convinced I didn’t sleep until I was three because I couldn’t remember it. But I’ve had vivid dreams and bad nights since, at least, then.

There was a special I watched on Nickelodeon’s early 1990s educational show, Nick News W5, about kidnapping. One girl they interviewed faked an asthma attack to get away from a stranger. I have so many details like this I’ve held on to. At preschool we read a book called Heckedy Peg about a mysterious crone named Heckedy Peg who comes to some children’s door when their mother is away. “I’m Heckedy Peg, I’ve lost my leg,” she says. When the children let her in, she uses her bad magic to turn them all into food. If their mother can’t guess which child is which, Heckedy Peg is going to make her eat them.

“I’m just not going to think about the book,” I told my teacher about an hour after reading Heckedy Peg, while I was coloring in a picture of some grapes. It may not surprise that my pre-K attempts at administering my own cognitive-behavioral therapy did not stop me from thinking about an almost implausibly macabre children’s book that perfectly combined my two greatest fears. It imploded my existence. I didn’t sleep for several nights. This has happened to me so many times since then, and there isn’t a single one of these experiences that my adult brain has let go of, trivialized. I’m still scared.

Some beds I have known. My older brother and I shared bunk beds until I was seven. I preferred the top bunk because from there I could mutilate the popcorn ceiling. When I was in third grade, I moved into my parents’ old room, and into their queen-sized waterbed. “Like a third grader with a waterbed” should be a new idiom along the lines of “nothing gold can stay.” It was only a few months before it was slumped like a dying whale in front of our house, leaking out on the sidewalk. After that I had a series of air mattresses that deflated so quickly that I was often lying on the bare bed frame. Then I had an old single mattress with dagger-sharp springs that would pierce the surface at unexpected moments. It was like sleeping in a booby trap. Through junior high and high school, I slept on a metal frame futon. The crossbars supporting the mattress kept falling off, until there was a large, unsleepable depression sunk in the bed’s right side.

I was about nine years old when my bedtime fixation began. I had a friend who went to sleep at 7:30. Even as most of our bedtimes were edging closer to 9:00, this did not strike me as excessively, dorkily early, but rather as intriguingly, exotically early. I began going to sleep earlier and earlier: after The Simpsons, at 8:00, after Jeopardy! at 7:30, after Home Improvement, at 7:00. Then I set my bedtime later and later, at 10:00, 11:00, midnight. I was always interested in how much these patterns could be manipulated, the extremes my body could get used to, what I could train myself to do. I don’t think I’ve really heard sleep disorders discussed the way eating disorders are, but that’s how I see my elementary school sleep compulsions: an attempt to manage a part of my life that always felt out of control. It’s like a formula for a build-your-own anxiety disorder. I was always stressed out by sleep, and obsessed with it.

There was a craze that swept my fourth grade class for a book I knew would fuck me up, and I read it anyway. It was a semi-educational collection of “true” ghost stories. The book was meant to be scary, but the narration told its pale, dubious stories a little wearily; it didn’t even buy into its own premise. It told the legendary story of the Fox Sisters, who began the Spiritualist movement in 1850 when they claimed to contact a ghost who communicated through a system of knocking sounds. The book pointed out what frauds the Foxes were; they made the sounds by cracking their knuckles. I also remember a story about a possibly haunted house, the evidence for which included a strange smell on the staircase and a mysterious vision a man had above his bed when waking up in the middle of the night. My tolerance for the creepy was profoundly low. It  didn’t take much, just a wedge to let the darkness in.

After I read the book I couldn’t sleep with my door open without seeing a sinister shape in the hallway. I sensed spirits floating in front of and behind me, stalking me; after dark everything took on a queasy glow. This was when I started having trouble sleeping through the night. Every other night I would wake up around three in the morning and stay awake. The next night I would be so exhausted that I would sleep well, setting up an exasperating cycle. On bad nights I would go upstairs and lie down in our living room. I didn’t sleep, but I felt better. Once I counted all the way to one thousand, staring through the spokes of the exercise bicycle.

If you don’t think a movie trailer can ruin a person’s life, I invite you to consider the following. Nicole Kidman, in Victorian dress, is working on a needlepoint. She looks up to see the chandelier above her shaking mysteriously. “Sometimes, the world of the dead gets mixed up with the world of the living,” a woman says in voiceover. A little girl is lying in bed staring at the doorknob to her room when it begins to rattle. A little boy is lying in bed when the curtains behind him open in a dramatic woosh. “You told your brother there was someone else in the room,” Nicole Kidman tells the little girl sternly. “There was,” the little girl replies. “Sooner or later, she’ll see them, and then everything will be different,” the voiceover woman says, and we see a frightened Nicole Kidman slowly entering a room in which everything is covered in white sheets. Nicole Kidman whips off the sheets in a frenzy, but finds only furniture. She stares at herself in a mirror she’s uncovered; she sees a door opening slowly behind her.

In rapid montage there is a series of creepy rooms and a figure wrapped in a lacy veil. “What do you want,” Nicole Kidman yells in a dark room, a stained glass window behind her. A hand touches the little boy’s face in bed and he screams. “They’re everywhere. They say this house is theirs,” the little girl tells Nicole Kidman. Nicole Kidman cowers behind a banister. The little girl and little boy run through dark woods and dark hallways. “Could you hear it? There’s someone there,” the little girl says. The picture goes dark. “THE OTHERS” illuminates the screen in glowing letters. Then we are back in the house. An old woman beneath a lacy veil sits on the ground playing with a strange wooden toy. “Where’s my daughter?” Nicole Kidman says. “Are you mad?” the woman says with a child’s voice. “I am your daughter.”

I still have not seen The Others. As far as I know, it is a fairly generic, not that scary haunted house movie elevated slightly by its only movie star. But it hit me like a curse at a vulnerable moment, the summer I turned thirteen—its commercials were the scariest things I had ever seen. They infused every second of television watching with peril. The overhead light in my bedroom had been broken for four years, but a little before my thirteenth birthday, one of my friends flipped the light switch, and, mysteriously, it turned on—and it wouldn’t turn back off. This is a common method of torture: I didn’t sleep for a week. It made me fragile, morbid, and a little feral. I had hallucinations. I became convinced that I would die before my birthday in August, and I’d never have to go to ninth grade. That summer brought the catalysts that converted standard-issue puberty and anxiety to crisis. Eventually, in the middle of one night, I stood tiptoe on my window seat and slashed the wires to the light with kitchen shears. The darkness felt like a breathing out.

If you don’t forget anything, then you will have evidence for every moment, every situation, that you should not relax. In ninth grade, I stopped sleeping through the night again. I would lie there, paralyzed and terrified, not letting myself move until the sunrise. I saw a TV special once about a woman who had been raped by an intruder at 3:00 AM. This became the time of highest danger, and I would not let my guard down even a little until 4:00 struck. I listened to the Beatles’ “Here Comes the Sun” on repeat, pitifully.

One Wednesday night at Catholic Youth Organization we watched a video about mental illness. It was my very first indication that my experiences from as far back as my memory went were not run of the mill childhood stuff. “Symptoms of anxiety disorder include: constant worry. Difficulty sleeping. Fear of a bad outcome if you don’t do certain things a certain way,” the video explained, and blew my mind. “I think I’m mentally ill,” I told my youth group leader, and he told me to talk to the school counselor. I told my counselor I was tense all the time and I didn’t sleep. “That sounds very hard,” she said, and told me to see a doctor.

About a year after that, I told my doctor that I couldn’t stop sleeping. I slept in until 2:00 on weekends. I would come home from school, take a nap, and sleep until morning. He told me my body might be making up for lost time. I had barely slept for so long, so once my mind had calmed down, my body was taking all the rest it could get.

At the end of ninth grade, my friend had me keep a dream journal for a project she was doing on dream interpretation. In the dreams I was wound really tight. I was always screaming. “R. L. had like 5 calculators and I took one and he got mad and screamed,” I wrote. In another entry: “It was after some formal dance and we were sitting on these big wall things. A. touched me and I started screaming.” I remember a dream where I was naked and strapped to a bed in a prison for child molesters. Even after I went to a doctor and a psychologist, after I started sleeping again, the nights were always long, and my journey through the darkness to morning was strange and hard. My recurring dreams never went away; in a way I always knew they were a more fundamental part of me than my fear. “I woke up last night after having a dream about old guys molesting people,” I wrote in my diary in tenth grade, “and I mean, that sounds funny, but really it was scary.” 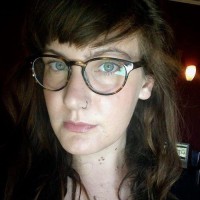 Alice Bolin is a writer living in Los Angeles. You can find her on Twitter.