The Secret to a Happy Marriage

Sarah Marshall’s previous work for The Toast can be found here.

Talk about politics, but only about Nixon. Specifically, only talk Nixon’s final years post-resignation, how his pallor grew grey and his body wracked with phlebitis and his mind consumed with sad tales of the death of kings. Work on your Nixon impression. Remind yourself that real love means loving decrepit, angry failure and no one embodies this principle quite like Nixon, with the possible exception of most other politicians.

Sing your entire marriage, based on the score to John Adam’s Nixon in China.

Treat yourself to a manicure every once in a while!

Adopt all your partner’s tastes as your own. Better yet, adopt their memories. Laughingly describe your sister’s antics at Six Flags the summer you were ten. When contradicted, keep your face perfectly still and say “But I wouldn’t make a mistake about that, now, would I?”

Have as many children as you can physically stand. Grow a row of teats like a she-wolf. Stand at the front gate with a baby hanging from each nipple and watch with hungry eyes as the mail carrier passes by.

Instead of having children, buy one hundred Boston ferns and call them your children. Shove candy bars into their soil. Let the rasp of their spores caress you in a way no one else ever has.

Cosplay Hetty Green every day for an entire year.

Never do your spouse’s laundry.

Never do your own laundry. Wear only a series of yard debris bags that slowly fill with your juices. Then shuck them off and leave them out on pickup day.

Do laundry constantly. Scrub your delicates until the soap peels your skin away. Buy a washboard and feel so incomplete without it in your arms that you are compelled to join a bluegrass band.

Forgive nothing. Become La Llorona. Roam the streets in a spectral fog and a Stevie Nicks gown, searching for bloody justice.

If the secret of a happy marriage eludes you, stuff yourself with other secrets: melt belly fat off in three weeks with a secret new plant recently discovered in the pristine rainforest that once concealed the Tasaday people; order pretzel-banana-croissantaccinos off the secret menu at Starbucks; wear Secret deodorant.

When your partner gets into bed beside you, do not look up, but instead slowly, heavily underline a passage in the true crime paperback you have been reading, one full of ground sheets and unlabeled Betamax tapes. 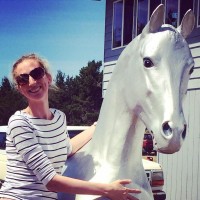 Sarah Marshall is not metaphor. She earned her MFA in fiction at Portland State University, where she wrote a thesis about dogfighting, ghost babies, and polygamy, and is currently at work on a novel about frontier vampires, which rips off Ravenous and Deadwood to equal extents.