Things For Which You Can Find Knitting Patterns

Kristen Hanley Cardozo’s previous work for The Toast can be found here.

1. PENIS COSIES. Ravelry, the largest social network for people who do yarn-related crafts, records four patterns for knit penis cosies, one crochet pattern for the same, and seven lip balm cosies that look like penises. Although the term “penis cosy” suggests that only the penis is involved, all of the penis cosy patterns include a little sweater for the testicles as well. This last detail suggests a misandrist plot, as overheated testicles cause sperm to die, especially the weaker sperm that results in be-penised babies.

FUN FACT: Wikipedia’s entry for “willy warmer” reports that Clark Gable received a handknit cock sock from Carole Lombard while he was filming Gone With The Wind.

2. AN OCTOPUSS. If you’ve ever wanted to knit an octopus with a cat’s head, this is a thing that you, dear knitter, could do.

3. BROCCOLI FLORETS. Roughage becomes that much rougher when it’s made of wool.

4. A RAT SWEATER. As in a sweater for rats, not a human sweater with rats on it. I assumed at first that this was just a fashionable accessory, but a Google search informs me that there are practical reasons why a rat might need a sweater. Rats have been domesticated since the Victorian era, and have, like other animals bred by humans, become quite varied in looks and behavior, sometimes in ways not at all beneficial to the animal. Hairless rats, which are sold as pets, have a tendency to become cold and sicken, as well as to scratch their unprotected skin. I have Thoughts on how ethical it is to breed animals with inherently harmful mutations, but hairless rats are by now a staple of the pet rat market, which, yes, is a thing. ANYWAY, hairless rat owners can knit their rat a sweater to keep the animal warm and protect her from accidental injury.

PERSONAL ANECDOTE: I have two pet rats (they both have hair) and I am totally tempted to make this sweater for them and then take pictures of them enjoying snacks while wearing stylish sweaters. I am not wholly consistent in my attitudes toward adorable animals under my care.

5. A STRAITJACKET FOR YOUR HOT WATER BOTTLE. Surely everyone has known the heartbreak of an unrestrained, violent hot water bottle. Now tragedy can be neatly avoided while keeping you deliciously warm on a cold winter night. If only our ancestors had had this, the great Hot Water Bottle Uprising of 1923 might never have happened.

6. DOG HUMILIATION TOOLS. Look, I’m opposed to deliberately breeding animals with harmful deformities just because we think they look cool, but I am 100% in favor of subjecting domestic animals to public embarrassment borne of hilarious hats and sweaters. Dogs wearing bear or mouse ears are pretty much the best thing you’ll see today and you know it. Knit your dog a shame-inducing hat and bring more joy to the world.

7. A WHALE SHARK THAT WILL STORE YOUR PHONE. Where did your phone go? Oh, it’s just been swallowed by small badass whale shark, that’s all. Yeah. A whale shark. It’ll cough it back up when you need it.

8. A FEMALE ANGLERFISH. Anglerfish are already terrifying-looking, but even more terrifying is how some anglerfish reproduce. The females, with the dangly glowing lure hanging out in front, dwarf their parasitic male paramours. It’s awfully dark down where the anglerfish live, and it can be hard to meet a potential love interest, so male anglerfish hang about, all small and helpless, unable to feed themselves or fend off larger creatures. When a giant female fish passes by, the male swims up, bites a hole in her side, and attaches himself, eventually merging with her circulatory system. At this point, most of his body apart from his testicles begins atrophying, and eventually he is little more than a pair of balls, hanging out, fertilizing eggs every so often, and living off of the nourishment provided by his female host. Why not knit one? Or, if knitting’s not your thing, why not use anglerfish as a metaphor in that story you’re workshopping? It’ll make that guy in your program, you know the one, super uncomfortable.

9. AN ALIEN AUTOPSY. THE TRUTH IS OUT THERE. Or in here. In your knitting. Your knitting is full of truths.

10. A CUTESY TOILET AND PLUNGER. I don’t know how a toilet is that cute, but that is one cute toilet.

11. A DALEK SKIN FOR YOUR EVIL COFFEE PRESS. It’s called CAFFEINATE, you guys.

12. A BEARD FOR A BEER CAN. This is wrapped up in so many layers of hipsterness that I can’t even find it, but I have the typical English major’s bias in favor of punny titles, so all is forgiven since it’s called “Beerd,” as it should be.

13. POTATOES. We all know that Millenials are wild about potatoes, but even the older generations will love these knitted spuds. Probably the hippest thing on this list.

14. A BERET FOR YOUR CAT. Cats already go around 24/7 with a look on their collective faces that says their toleration of you is temporary and someday they will make you pay permanently for every transgression. A beret just cements this look in a dignified and stylish way. Your cat’s dead-eyed, angry stare, peeking out from beneath a kicky chapeau, will bring as much joy as a dog in a mouse-eared hat.

15. MITTENS FESTOONED WITH THREE-DIMENSIONAL VULVAS. The level of skill and thought that went into these is mind-boggling.

16. A LOVELY CARDIGAN WITH DECORATIVE PENISES. I was trying not to list more than one thing by the same designer, but this sweater, designed by the lady who made the vulva mittens, is just amazing, as are the photographs.

17. A FEZ TO HIDE TOILET PAPER. I’m not sure how toilet paper covers came to be a thing in the first place. It has an apocryphal Victorian feel to it, like paper connected with indecorous acts performed in the smallest room is itself tainted by association and unseemly. That said, if you’re going to hide toilet paper, a fez is already the right shape.

18. AN ANOMALOCARIS. A prehistoric predator of the Cambrian seas, preserved only in fossils. It had 30,000 lenses in its huge eyes, but you don’t have to knit all 30,000.

19. A SCARF THAT IS ALSO A LUNAR CALENDAR. How else will you keep track of your periods while looking stylish as hell?

20. BALACLAVAS OF ELDRITCH HORROR. H.P. Lovecraft was racist as fuck, it needs to be said. These balaclavas are millions of times better than anything he ever did.

21. ENGLISH BREAKFAST. I completely love the problem-solving that goes into knits meant to look like things that really don’t look like knitting. How to represent baked beans or ketchup in yarn? A mass of bobbles and a coil of icord solve those two quite tidily.

22. TEACUPS. Structurally unsound, the very worst thing to contain hot tea. You’d be better off pouring tea into your hat, and that’s not a great idea either. Knit teacups never fail to delight me. 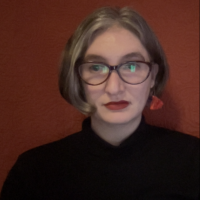 Kristen Hanley Cardozo writes and knits in between reliving embarrassing moments in her past in excruciating detail.