The Right Words to Say: On Being Read as White

When you meet me for the first time, you read me as if I were a book. Every idea you have about me and every word I say is part of that book.

We all have crowded bookshelves in our heads crammed with texts for every person we know. They knock about in our skulls, falling off the shelves. We refer to them again and again, wearing the pages thin. When you read me wrong, everything that follows is askew.

I have strategies I use to tell you who I am. They have different rates of success, but I will employ them all whenever the situation allows. I mention my quinceañera. I tell the story of the first time my parents heard me speak English. I say words deliberately correctly in Spanish like guerrilla. I talk about Mexican music I like. I note that I am a bilingual Spanish speaker on my resume. I talk about Mexican movies I like. When I am with people, I answer phone calls from my mom and tell her I can’t talk, but I do it in Spanish. I keep her on the phone a little longer than I have to. Whenever the topic of family comes up, I say that most of mine lives in Mexico. I am prepared with these tactics when I have to tell you who I am, ready to fit them in between the pauses so that you might reread me. I’m better at it now than I used to be—I’ve been practicing a long time, figuring out the right words to say.

My mother was born in Mexico City. She doesn’t know what her first word was. I was born in Culver City, California. My first language was Spanish, and I learned English at preschool. My first word was “agua,” but my parents don’t agree if that came before or after the first time I said my name. My skin is lighter than my mother’s and I don’t speak English with an accent like she does and my last name is not Mexican and I have an American dad. I have learned that if I want someone to read who I am, I have to tell them.

I know that the way I am read is privilege. When people look at me they read me as a white woman and when they look at my mother they read her as a Mexican woman. Even though she has a PhD, I have heard white people speak more loudly when they speak to her, like she can’t understand. I know I walk through doors every single day because I have white-passing privilege. I will notice some of them. I will fail to notice others. There will be so many doors in my life that they cannot be counted.

My mom says that my voice sounds different when I speak in Spanish. She says I sound nicer.

When I learn what sounds animals make, I learn them en Español. Baby chicks in Spanish say, “Pío pío pío,” cuando tienen hambre y cuando tienen frio. Breakfast at my house is huevos rancheros and a quesadilla. My mom wraps the quesadilla in a paper towel so I won’t burn my fingers on the hot cheese. I have tapes of Disney songs in Spanish and I carry around my red and white tape player to listen to them wherever I go. I watch Zoot Suit and Mi Vida Loca and Selena and Mi Familia and El Norte and La Bamba and Stand and Deliver after dinner. This is my childhood. This is the person I want you to read.

I have never told anyone that the way English speakers pronounce my name is different than the way my name sounds when it comes out of my mother’s mouth. I’ve never corrected anyone. I suppose the first time I could have was my first day of school. How many days did it take before that was how I heard my own name, too? My name comes out of my mouth in English.

I want you to see that mi mamá taught me how to dance cumbia in our living room, that she took belly dancing classes when I was in elementary school and I was embarrassed about it because it wasn’t something any of my white friends’ mothers would do, that she played Alejandra Guzman and Maná and the Gipsy Kings in the nineties, that I still know all the dialogue in Zoot Suit by heart and Amores Perros still makes me cry, that I loved telenovelas, that I watched Como Agua Para Chocolate with her and she made me cover my eyes during the sex parts, that we always had sugar skulls and pan dulce and an altar for el Día de los Muertos and I poured out shots of tequila for my dead abuelos, that my comfort food is caldo do pollo con arroz and lots of cilantro and lime, that she was the first woman in her family to go to college, and when I was in college I took a year of Spanish literature and I called her and we talked about my papers and what I was reading, that she taught me how to ride a bike even though she didn’t know how to ride a bike, and taught me to drive ten years later, that my first words in English were “Don’t push me,” that I am so rarely read as Mexican or as a person of color that I forget that it feels so, so good when I am, like I could cry, like you really see me, like hearing my name in Spanish.

Sometimes, I am read without having to say anything at all. Sometimes I don’t have to try my strategies and tactics, figure out the right words to say. The times that I have been read right, from the very first moment, I have been with my mother. Seeing the two of us together, it’s so clear we are mother and daughter, the same eyes and laugh. The same. And when she is read, I am read alongside her. 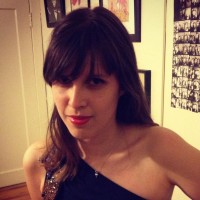 Dahlia Grossman-Heinze is a Chicana writer and hot chocolate enthusiast. Follow her on Twitter @salvadordahlia and on Tumblr at grossmad.tumblr.com.