The first time my brother was kidnapped I knew about it right away. He was 16 and I was 24. We both lived with our parents in our hometown of Caracas, Venezuela. He had borrowed my dad’s SUV to go to the grocery store and was intercepted returning to our apartment building by two cars that blocked him in. Men held him at gunpoint, moved him out of the SUV into one of their cars and drove off, taking our car with them. He was held down in the space between the front and back seat and repeatedly hit in the head with the butt of a gun while the men asked where my family worked, how much money we had and how many bank accounts. This was not planned; this was an attack of opportunity — disguised men waiting for a car that strikes their fancy in a street without much traffic.

They call it secuestro express — express kidnapping — and it has quickly become the go-to tool in the ever-expanding toolbox of Venezuela’s criminals. They drive you around town, get money from ATMs, take your car and leave you by the side of a remote road a few hours later — usually, alive. In my brother’s case, they left him with cab fare so he could go home. Criminals have hearts too, don’t you know.

Some say my brother is lucky to be alive. Maybe. But he’s not lucky to live in a place where armed kidnappings are the trivial M.O. of el hampa común — the common criminal. My Facebook feed doesn’t let me forget it: Business Insider’s second most dangerous city in the world? Caracas. Fifth most dangerous country for kidnappings? Venezuela. My American girlfriend doesn’t let me forget either: since she traveled home with me last year, she forwards me travel advisory emails from the U.S. Department of State. The last one had these two nuggets: over 134 homicides per 100,000 inhabitants and over 3,000 kidnap-for-ransom cases per year. According to NGOs tracking crime in the country, 12% of deaths in 2013 were violent ones. Let me put this in perspective by playing Six Degrees of Kevin Bacon. Imagine that everyone you know either knows Kevin Bacon or is close to someone who does. Now change Kevin Bacon to being a victim of a violent crime.

By the time I found out my brother was kidnapped the second time, it was almost over. It was eight years later and I was living over 2,000 miles away in Austin, Texas. My mother called me and said he was being held hostage with his friend Punchi and his dad inside their home. Cops had the house surrounded, debating whether to barge in guns blazing if the negotiations went sour.

My brother had been picking up Punchi to go to a soccer match, but they were intercepted by four men and forced inside at gunpoint so they could rob Punchi’s house. It would have been fast, but a pizza delivery guy saw it happening and called the cops. And in Venezuela, a country where police officers are paid the same wages as housemaids, the last thing you want is for cops to make things more complicated.

After the criminals knew that the place was surrounded they started to get cell phone calls from their families. One of them talked to his sister, cried to her on the phone, said he was sorry. She was urging him to come out and turn himself in; she said she didn’t want the cops to kill him. My brother noticed another kidnapper sobbing in the corner, his hands on his face. He sat down next to him and they talked for a while. He apologized to my brother, said he was ashamed, that this was not who he was. He studied at the university, worked as a messenger in an office building, was trying to get ahead. He grew up with these guys, loved them like brothers, they begged him to help them out since he was the only one that owned a car. A few minutes later the kidnappers had turned themselves in and my mother cried while my brother hugged her, telling her it was ok.

But that good fortune is in short supply in Venezuela. We have a country that is literally rich (largest oil reserves in the world) but suffers from the worst inflation in the planet. The inflation rate makes it so a standard family with two paychecks struggles to afford essentials — that is when you can actually find them in the stores…for the past decade we’ve had shortages of sugar, milk, chicken, cars, coffee, even toilet paper, and long queues and even fights have become the norm in our not-so-super-markets. Our economic circumstance has made it so the fifth-largest oil producing country in the world has its inhabitants turning to crime as a source of supplemental income.

Those four kids who kidnapped my brother — who have moms, siblings, girlfriends, neighbors and friends of their own — are now in a hell called the Venezuelan prison system. Another of the failed promises of this unending “revolutionary” government and all the other unending governments that came before it. A system that has failed so miserably that guards no longer patrol the insides of the prisons but leave the inmates to run their asylum as they see fit. Overcrowded, with violent death an everyday occurrence (unofficial numbers put violent deaths inside prisons at over 500 in 2012 alone), the Venezuelan prison is a factory that turns young people with bad fortune into beings full of hate. It’s an institution of death, madness and injustice. No one deserves to be there.

In a better Venezuela — in a country where our abundant resources were spent responsibly, where we built a public education system worthy of our intellectual capital, where our poor were not forgotten and ghettoized — the four kids who kidnapped my brother would have easily been sharing a beer with him at the Estadio Universitario, cheering on the Leones baseball team. Instead, today one of them is dead, killed in a prison riot in 2014, while the other three wonder if the same fate lurks around the corner.

When I had the chance to talk to my brother that night I could sense exhaustion and relief in his voice, sure, but not a trace of anger. Sadness is what I sensed the most. Eran chamos — they were just kids, he kept telling me. I think in a way he was trying to tell me what I was already thinking: if my brother and I were born to their circumstances, if we had their luck, we could have been the ones holding the guns.

So we’re lucky, I guess. I’m lucky to still have my brother around. The country is lucky too. A young kid full of promise…brave, smart, that actively works to make Venezuela better. He refuses to give in to the fear that I’m sure he feels sometimes. When the car behind him has been following a bit too long. When the street is dark and he’s waiting for his girl to come out of her apartment building. I’m proud that he doesn’t give in, that his experience didn’t make him turn his back on our city. There’s bravery in that, sure, but there’s also love. Love for the country that all Venezuelans know we could have. Love for a Venezuela that is still possible, even in the midst of such shitty fortune. 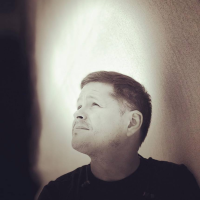 Alejandro Puyana grew up in Caracas but makes his home in Austin, Texas. He is a political writer for progressive causes and candidates and a sporadic contributor to the Austin Chronicle. He is currently working on an essay collection about Venezuela, tentatively titled "I can smell the tear gas from across the sea."