On Hebrew and Living in Gendered Language

Picture this: a world in which you must declare your preferred gender pronoun, or PGP, in every single sentence you utter. If you are someone who cares about the notion of gender, this may sound rather wonderful. No one would ever get confused. You’d always know how to address your fellow persons, and they would know how to address you. Conversations might go a little like this:

Friend: I’m fine. And you, female?

Me: But anyway, never mind that, I’m okay now. Do you, male, want to go to the female-store to get some male-groceries with me?

It sounds awkward, sure, but more importantly, you may have noticed that this conversation is completely binary and that almost everything is gendered – nouns as well as pronouns. Here is another example, one that I heard last week:

Loudspeaker at train station: Attention, all male passengers, the 6:40 female-train to Tel Aviv has been female-canceled due to female-problems with the female-infrastructure at Lod.

Many people may be familiar with languages like Spanish or French in which nouns are gendered. The main difference between Hebrew and these other languages, however, is that one cannot speak in first or second person in Hebrew without indicating gender. The word “I” is ungendered, but any verb connected to it in present or future tenses inherently is. Thus, the phrase “I want a cookie” becomes, in literal translation, “I female-want a female-cookie.” (Cookie is a female-gendered noun, which I’m okay with, because yum, cookies.) In the example above, the reason the word “canceled” is attached to the word “female” is because “train” is a female subject, grammatically, and thus most verb conjugations describing that train will be gendered.

In other words, interpersonal conversation is never without the indication of gender. Even if you and another person were on two sides of a barrier and your voices were not indicative of your gender, you would each know the other’s gender within a few sentences because of the verb formulations you’d use.

The most densely populated Hebrew-speaking society resides in Israel, which is where I am as I write this. I grew up here, and though I considered myself a feminist as soon as I learned what being a feminist meant, it wasn’t until I went to college that I began to really think about the issues women have had to deal with inside the constraints of the Hebrew language. The liberal arts college I attended in New York was the kind of place where one could not help learning about gender. Luckily for me, as a card-carrying member of the LGBTQIA community (obviously, there are cards. Super classy. Glitter is optional.), I happened to want to, so I asked a lot of questions and apologized for my ignorance, and listened intently and read a lot until I could discuss the matter intelligently.

Coming back to Israel after a year away and speaking Hebrew day in and day out again has been a bit of a shock. I have been reminded of the many, many issues women deal with here. For one thing, the correct way to address a group of people in Hebrew is usually with male pronouns and verbs, unless the group is exclusively female. So if a lecture hall is filled with women, but one seat is occupied by a man, the professor is supposed to address the crowd with you-plural-male pronouns and verbs. Announcements at airports and train- and bus-stations similarly address crowds with the second-person-plural-male pronouns, because the assumption is that there will be men there (even one is enough to make this mandatory).

This “correct” way of speaking has been handed down from on high, the Academy of the Hebrew Language, which is “the world’s premiere institution for the Hebrew language, and in Israel, its decisions are binding on all governmental agencies.” The About section of the Academy’s website goes on to say: “Although the Academy has the reputation of being Israel’s ‘language police’, it does not police spontaneous speech. The institution considers its decisions binding only for written texts and formal speeches.”

What does this mean in practice? That formal speeches are addressed to men. That academics address their papers to men. That national examinations are usually addressed to men, with a little asterisk at the bottom of the page or the end of the exam booklet with some version of this disclaimer: “This test is geared towards both men and women.” Gee, thanks, I’d always think while sitting my exams in high school. And here I was thinking maybe I didn’t need to complete the test because I’m a woman and hence not in need of education. Furthermore, in day-to-day speech, the general second-person pronoun used in hypotheticals or examples of any kind is also gendered male.

The thing that really gets me is that we’re used to it here. The few women who speak out against these linguistic practices are billed as militant feminists. Knesset Member and former journalist Merav Michaeli is one of these women. She defies the stereotypes many people, here especially, associate with the idea of feminism; for one thing, she’s not married but is not a lesbian (her non-husband, as she calls him, is a comedian several years her junior). Far more importantly, she pisses people off by the fact that she refuses to abide by the arbitrary, patriarchy-backed rules of the Academy of the Hebrew Language. For every time in which the male pronoun should be used to address crowds or state hypotheticals, she uses the female pronouns. Occasionally, she doubles up, using both – for example a sentence might run: You-males and you-females, who male-want and female-want to male-see and female-see change…etc.

This is a step in the right direction in terms of acknowledging the fact that women exist here. There are many more changes which could and should be made, but unfortunately this country bows down to the most religious section of its population, which repeatedly tries (and too often succeeds) to ban immodest images of women in advertisements in places like Jerusalem and Beit Shemesh. “Immodest,” by the way, means uncovered elbows, shoulders or knees. This is a whole separate kettle of gefilte fish, but it is demonstrative of the struggles women must face in order to be visible and counted.

While women’s voices still struggle to be heard, there is also a rather wide and vocal LGBTQIA community in Israel, centered mostly in and around Tel Aviv. Recently, in December of 2014, Domestic Union Cards have been introduced, allowing same-sex couples who meet the legal definition of common-law spouses — living together, sharing financial responsibilities — all the same rights as opposite gender couples. (Except, of course, that opposite-gender couples can marry without meeting any definitions except those of male and female according to their genitalia.)

But what about people who are neither man nor woman? Who define themselves as neither male nor female or as both female and male? The concept of genderqueers is not particularly known here, even among many people who belong to the LGBTQIA community. In Hebrew, mind you, the acronym is pronounced LaHaTaB, which stands for Lesbians, Homos, Transgender and Bisexuals. Queer or questioning, intersex or asexual individuals aren’t recognized in any form of acronym that I’ve heard of in Hebrew.

A friend of mine, whom I’ve known since I was three years old, is part of feminist and queer circles here and studied linguistics at university, and so one day I put this question to her: How do genderqueer people handle the binary nature of Hebrew pronouns? One thing led to another, and I soon found myself conversing with the single Israel-based genderqueer Facebook group.

The way genderqueer Hebrew speakers have solved the problem is interesting, both grammatically and politically. Gramatically, the genderqueer population has basically invented its own. There are a few methods of making speech genderqueer: either one uses general verbs that have no gender – “I feel like eating,” for instance, which in Hebrew would be “it’s coming to me to eat.” Infinitives aren’t gendered, nor is the phrase “ba li,” which literally means “it’s coming to me,” but really means “I want” or “I feel like” doing or having or being something.

Another way genderqueer folks have gotten around the binary nature of Hebrew is to simply harness it and mix it all up with itself. A genderqueer person might then say something like “I am male-going to the gallery and female-buying art.” Or they will say, “I am male-going/female-going to the gallery and female-buying/male-buying art.” Since the feminine endings of words in Hebrew are usually simply an added suffix, genderqueer folks can play with the pronunciations of words to make them ambiguous.

I came into this story believing that there was no plus side to the gendered nature of Hebrew pronouns, but one of the Facebook group commentators, Jane Harris, who was kind enough to engage in this discussion with me, said this: “It’s funny how Hebrew is so empowering to genderqueers and other trans* people who are Out, and allows them to use their own grammatic gender, but so unconvinient to Closeted folks, who get a reminder every time [they] refer to themselves.”

Which brings me to the political importance of how genderqueers use the unyieldingly binary Hebrew language. By using the tactics invented by the community, they are automatically coming out in their speech, implying their ungendered, ambiguously gendered, or both-gendered status. Additionally, anyone who’s genderqueer or trans immediately knows when someone is making a mistake about their gender, because it will be imposed upon them in everyday speech, whether by a government official or the clerk at the grocery store. Then again, another commentator said that when they used mixed-gender pronouns, sometimes people began incorporating that same kind of mixture right back, apparently without even noticing.

The genderqueer community is relatively small in Israel, but it is a thoughtful and aware population. Their working around the limitations of language is necessary for their identity, but it is also a lesson in subtle activism. While Merav Michaeli may use her position to speak from podiums and address dozens of mostly male Knesset members as females in order to make the point that women should be counted just as much as men, the genderqueer folks are inventing a new grammatical structure entirely. Neither Michaeli’s linguistic choices nor genderqueer’s new grammar is recognized by the rules set up by Academy of the Hebrew Language. Just goes to show you that sometimes the only way to right a wrong is to ignore the rules entirely. 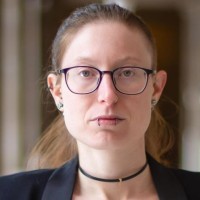