On the Cutting Room Floor

Everything was a secret. Everything important still is. One of us craves truth, loud and certain. One of us, silence. The others, only the hum of their own worlds, turning for themselves alone.

Our secrets included everything: my father’s first marriage to a woman so critically ill she spent much of her life in a sanitarium; my mother’s first marriage, which included my oldest brother, whom I did not meet at all until I was six. My sister’s rape. My closest brother’s addiction and mental illness. Our poverty. Food stamps and government cheese handouts. The pills that exchanged all hands except mine: uppers, downers, painkillers, pills to get you going, pills to relax you.

They even gave nerve pills to the dog.

For the record, Xanax doesn’t work on dogs. It makes them weird, hyper, stoned. Not the desired effect.

I was living in a cloud of bees, every bee, a secret with a deadly sting.

It takes a small family earthquake sometimes, to expose the fault lines underneath. Plates shift and whole states drift away. The chasms, deep.

In ninth grade, my uncle had died, and as my father shouted one day in the car, the whole goddamn family was falling apart.

They’d grown up together, eighteen months apart, my father, born in 1920, his brother, 1918. His brother, the craftiest of con men. They were both accordion virtuosos. My uncle was a staggering alcoholic. He had several different last names. He would cheat his own brother out of anything. My sister was biologically his.

I was an afterthought. Born in the 70s when my parents were already in their forties and fifties. I was supposed to fill the cracks of all the places they’d gone wrong, the extramarital affairs, the babies born out of wedlock, the drugs, the lying, the abuse. I was one last-ditch effort at getting it right, at being legitimate. I was going to be sane, and sober. I was going to be pretty, and funny, and smart.

There are pictures of me in pin curls, my hair done up like a child star from the 1930s. In elementary school, I wore dresses with crinolines everyday. In the seventies, and early eighties, when girls were wearing jeans and sneakers and plaid shirts.

By ninth grade, I was deep in my own secrets. My mother found a love note I had written to a girl. I told her it was a story. It’s fiction, I said.

I started cutting when the surface of my skin couldn’t hold back any more secrets. When everything I carried inside threatened to burst through.

I was in the back of the car. The sharp, a plastic cut out from the top of a hairspray can. We were parked in the town my father grew up in, a small, shitty central Pennsylvania coal town, a place we would come back to again and again – not because there was anything worth visiting, just to revisit the pain, to reopen the wound that was his early life, his dead parents, the struggle of the great depression. We went four or five times a year, and stayed in a dark, run down motel with vibrating beds and gold sprinkled into the ceiling plaster. The motel sat under a bridge that sat below a state penitentiary and a mall. It was the mall where I bought most of my school clothes.

My parents argued. I don’t remember what about. I only remember the timbre of their voices, a sound that still wakes me in the night, a nerve-wracking auditory hallucination of a man and woman fighting. I stuck the sharp end of the plastic disc into my forearm. Not the underneath, not the wrist, on the top, where the skin was tougher and tanned. It left a raised, pink welt that didn’t bleed. I dragged again, digging the same trench until blood bubbled under the skin and broke through. That breaking, like coming up for air. It felt like fucking Christmas, like letting a balloon go, flying around the room in crazy circles, deflating.

I kept going. Not there in the car, but at home, for months after. When I was around my parents, I covered arms with long sleeves or bracelets. I wasn’t about to let them see what I had figured out, how I had reconciled what roiled inside me, and let the boil burst on my skin.

School was a different story. I would wait until I was on the bus to rework my hair into a kind of punk mullet, half John Taylor, half Tommy Stinson. I’d tipped my bangs with peroxide and used blue gel on them. I stuck a safety pin through my earring hole. I rolled up the sleeves on my black t-shirts. I took ties out of my father’s closet and wore them with ripped jeans, with converse sneakers. I had a boyfriend, and a girlfriend who was secret. My friends thought I was reckless, troubled, smart. I started writing.

I had also, in secret, started seeing the school psychologist.

We met weekly, sometimes more than weekly. She had a room in the library, with a round table and posters on the walls of kittens and monkeys. She was an earthy, hiking boot wearing Jewish lesbian. Her face, leathery and friendly. She told me I was worldly. I had to look it up.

We talked about cutting. I didn’t have the clarity to explain it. I wore them like battle scars. Look, I’m surviving. Look, I’m not dead. Look, when you cut me, you secretive bastards, I bleed.

I didn’t know, wouldn’t know for thirty years, that the overwhelming majority of cutters had been sexually abused.

Even when my mother asked me, finally, when I was in my late twenties, already the mother of two small boys, point blank, if anyone had ever abused me, it rolled off of me like water.

She must have thought she’d done a good job. Because I buried that secret so deep, you’d have to cut me in half to get it out.

I should have known someone would notice, that someone might report, even though the school psychologist had assured me it was a safe place. I skirted the issue of suicide with her, knowing it was a word that required intervention. Instead, we talked about anxiety, about depression, about release.

It happened in art class.

I had been listening to Ziggy Stardust. At that time, I’d picked it up in a record store bargain bin for five dollars. It was old, from before I was even born, and weird, weirder than anything I’d encountered. Bowie was a queer alien savior for a kid like me. He reached right out, unafraid, Give me your hands! he cried. You’re wonderful!

It’s where I learned the word lacerate – from the Greek, lakis, to tear, a transitive verb that meant to rend roughly, or wound jaggedly. Also, to cause sharp mental or emotional pain.

The layers of meaning in that one word were pure beauty to me. I loved that something, pain, anything, could be transitive.

I used the word. I was working on a Picasso-style line drawing, all one movement, never lifting the pen, creating a portrait. Frustrated, I mumbled something about laceration.

What happened wasn’t instant, but it went pretty fast.

They called my parents.

My parents wore a scrim of normal. A façade that said sweet old couple, like grandparents. It was hard to picture any trouble befalling them. Harder still to imagine the roar of my father’s voice, or the sight of him knocking my brother out cold with a baseball bat.

We met with the dean and the psychologist, in a dark paneled, mid-century office. The dean, a fortyish woman with a PhD, who wore pencil skirts and lipstick and had no idea who I was. The psychologist, in her jeans and boots. And my parents, who when I was fourteen, were fifty-seven and sixty-seven.

My parents offered their standard, oh, you know how girls that age are. So dramatic! I think my mother referred to me as blue. Everyone gets blue sometimes.

I located the fault lines. Beneath me, the plates were shifting, making room, adjusting, easing what threatened to erupt.

I went along with them.

It was said in frustration. An overreaction. No cause for alarm. I remember the psychologist’s eyebrows, raised, the way her mouth opened and closed and how she looked at me, at my parents, and then out the window. Everything we had talked about, everything we had worked on for months, cut from the final version.

My parents had not come in to be convinced. They came in to resolve, to explain, and resolve, like masters of public relations. They had a story to keep straight. They didn’t want to know what I meant when I used the word lacerate, they didn’t want to hear what the psychologist had to say about my arms, or my heart, or my brain. It was their job to cover it over, to bury the secret deep and move on. Any pain, spackled over with lies.

And in my own preservation, I agreed to self-edit. I never saw the psychologist again.

That summer, when my aunt asked me what had happened to my arms, my mother told her I climbed a lot of trees.

I wasn’t interested in lying. Only cutting. The beauty of editing is in the release. Not because you bear that pain to the world, but because you cut it off before it sees the light of day. It burns on the surface, and leaves just a faint mark.

I still have them. The faintest white lines on my arms. I kept cutting. I’ve cut more recently than I care to tell, only when the pain of containment is too much to bear. I’ve carried it into my work. Write it down. Cross it out. Break open and bleed, in the deepest places, but by the final version, clean that shit up.

Secrets are a canker. A welt of dead tissue, sore, throbbing, undeniable. I became a spiritual self-surgeon, cutting away at infection, paring down to a hard, white scar.

On paper, a minimalist. The surface of my fiction, a clean cut. Underneath, a landmine of secrets, bled out, released and edited, before you even got there. 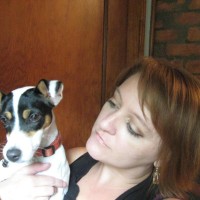 Jennifer Pashley is the author of two story collections, States (Lewis Clark 2007) and The Conjurer (Standing Stone 2013). She works as a waitress, a bartender, and a kitchen expediter at a small bistro in Upstate New York, and is a hardcore dog cuddler. Her debut novel, The Scamp, will be released from Tin House Books in August.