What Writing a Novel Taught Me About Female Friendship When I first met my best friend, S, we were fifteen. We both immediately agreed that we wished, more than anything, that we’d been born boys. We spent hours, melted by the central California heat, sprawled in tall grass and eating chocolate bars, discussing exactly what we would do if we were men: places we would travel, risks we would take, sexual adventures we would have, mustaches we would grow.

She agreed immediately. While S was able to rush and take the SATs, I somehow missed the date and wound up sending in only the essay section of my college application: a letter explaining I no longer wanted to go to high school and begging to be let in. I think I actually promised I would not disappoint them and that they would never have a student who worked as hard or surprised them as mightily as I would.  I was too young for guile; I meant every soppingly earnest word. Neither of us had a GED.

By some obscure miracle, Eugene Lang College admitted us both. We moved to New York City together. I was sixteen and S had just turned seventeen.

We ate a lot of cheese. We had ghastly romantic and sexual misadventures. We discovered drugs and alcohol. We spoke worriedly about ourselves as women, as artists. Were women capable of being as great as men? It was a question we were ignorant enough to actually entertain. We hadn’t yet heard of feminism; we were too busy pretending we smoked cigarettes. Why was there no female Tolstoy?  What if women were simply not capable, and by extension, we were destined always to be a little silly? Always to be a little less. No matter how we burned. No matter how we wanted. No matter how we worked.

It was a relief to grow up and understand the truth, which is that women hadn’t been free for so very long. I had not understood, for instance, that my grandmother had been born into a world where women could not vote. I had not understood just how short the twentieth century was. And it dawned on me, and on S both, that we were freer than women had ever been before. We were the first women who had been born boys. The only limit on what we could do with that freedom was going to be our own imaginations.

In college, we were A students. I was the commencement speaker. We both went on to receive graduate degrees. We both went on to have careers as writers, which is fairly statistically anomalous. We still talk on the phone at least once a week. She reads every book I write. My first novel The Girls from Corona del Mar was dedicated to her.

I did not set out to write a novel about female friendship. I didn’t even know the Best Friend Novel was a thing until both my agent and my editor casually used the phrase. I was just trying to write about young women by using my own experience, and in my experience, young women have best friends and those relationships are some of the most profound and abidingly meaningful of their lives. But it turned out that speaking about the bond between young women was a cliché. Everyone assured me this was so.

“Well, the Best Friend Novel is usually so hackneyed and over done,” my agent said, excited that I had such a “fresh take.”

“You really navigated the pitfalls of the genre. Best Friend Books can be so tired,” my publicist said.

Even the reviews spoke in these terms: “Thorpe brings sensitivity to the well trodden terrain of female friendship.”

But was it well trodden?

I called up S to ask.

“Do you think they are talking about Sula?” I asked.

“Maybe they are talking about that Jennifer Weiner novel, Best Friends Forever,” I said. “I liked that book.”

“Well, they can’t be talking about Elena Ferrante.”

“Certainly not,” I agreed.  We both sighed, baffled.

How many novels did it take to make a terrain well trodden? When a woman on my marketing team was assigned to write a list for a web feature called 20 Books About Female Friendship, she couldn’t come up with that many. She tried for 15 and she still couldn’t do it. Eventually, she came up with 10, but one was a memoir and one was a movie.

Even if female friendships were currently being portrayed all across TV and in movies–from Broad City and Girls to Bridesmaids, even the picaresque Tammy–it didn’t seem the same for books. Besides which, most big subjects, like war or love for example, seemed to be so rich and universal that no amount of treatment was too much. Why wasn’t female friendship considered one of these “universal” themes? Why were we so quick to assume there wasn’t more to explore?

The longer I spent as the author of a Best Friend Novel, the weirder things got. I was contacted by an anthology that wanted essays about the failure of female friendships and to hear stories about how women had to let go of their girlfriends in order to accept their “real” relationships with their husbands. I was asked by the editor of a woman’s magazine to change an essay so that it would more accurately indicate that when female friendship got too intense, it became toxic. “Because obviously,” she said, “anytime you start using romantic language to describe a friendship, something has gone wrong.”

Had it? I have always described my love for S in romantic language. It is the closest language I have for the intensity of my feelings. I maintain, stalwartly, that she is the most beautiful woman in the world. I remain irate that the world does not give women a language for prioritizing their relationships with each other. It used to bother me that people would accept me moving across the country for a job, but not so I could live closer to S. These days, we live in different states, but fly to see each other three or four times a year. My son calls her Auntie. His favorite stuffed toy is a little plush horsey she got him. If our husbands object to the airfare, they know enough to keep quiet about it. Whatever we get from each other has nothing to do with them, nor would they be eager to try to take on that role.

S and I have spent our lives tapping on things to see if they were hollow. Tap-tap—did we really actually need to go to high school? Tap-tap—was everyone for sure positive we couldn’t travel alone through Europe? What about India? Indonesia? Tap-tap-tap—was it really impossible to become writers? Was what we had to say really so silly, so less than, so nothing?

Some things we learned were empty conventions, while other things, like the necessity of hard work, the imperative to treat others as you would be treated, and the importance of listening more than you speak, turned out to be quite solid.

But over the last year, I have come to believe that the idea of the Best Friend Novel is as imaginary as the idea of the “toxic” female friendship. They are both pretty ideas that make the speaker feel smart and knowing, and that are ultimately baseless, hollow things that break the moment you give them a good investigative thwack.

Because the truth is, women have been loving each other since the beginning of time. Friendships between women are one of the abiding structural features of our lives because our relationships to one another are passionately meaningful. Any literature that attempts to treat women’s lives seriously will include female friendships. It isn’t a genre. It isn’t a cliché. It’s a way in to talking about what we’ve been trying to talk about from the beginning: the human experience. 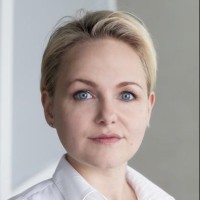 Rufi Thorpe received her MFA from the University of Virginia in 2009. Her debut novel, The Girls From Corona del Mar, was published by Knopf July 2014, and is out in paperback from Vintage in June 2015. A native of California, she currently lives in Washington D.C. with her husband and two children.