Some Assembly Required: Meditation in a Furniture Store

This may well be where my nervous breakdown will come: here, in this IKEA. Today I am a fake writer writing in a fake office at a real desk, model name KLIMPEN/LALLE. Its main characteristics are whiteness and modesty. Its chair is rather uncomfortable, but IKEA isn’t paying me to be here, so I don’t have to be anything but honest. The Amtrak residency, this ain’t.

To be clear, this IKEA is open for business. The KLIMPEN/LALLE and I are being circled by a slow-moving crowd of Minnesotans, many of whom are eyeing us suspiciously. I wonder if I can get in trouble for this, and if so, what it would look like.

I might not be able to write anything great, but at least I can shock someone by not writing anything great while sitting at a floor-model desk. I hope that when I do surprise someone they’ll be holding a tray of a dozen meatballs and that said meatballs will plop to the ground one by one, rolling away as she or he exclaims in surprise: “But the daring of her! How writerly — she must be the real deal. Failing that, an audacious Yoko-Ono-type performance artist, at least.”

This is all that there is for me, though, here in this IKEA. My initial mission — to replace the purple guest towels (bleached by my fucking Proactiv facewash that keeps my face relatively zit-free and then ruins everything it touches) before my friend and her husband return home (from their whirlwind European vacation, which they can afford because they are medical professionals) and find that the writer-friend they generously allowed to (rent-free) occupy their (splendid, all-too-proximal to the glittering nightlife of Uptown) condominium has not written a word of her novel — has failed. The purple towels are out of stock. The blue-shirted manager himself cannot help me. The only object available for purchase is despair.

I think I initially sat down in the desk so I wouldn’t have to think anymore.

Everyone shopping happily around me with their life partners and credit cards — look at them, rubbing it in, the fact that I do not currently have any need for IKEA, the fact that I am technically without a home and do not actually own or rent any sort of living space of my own.

This very night I am moving back in with my parents. I am doing it so as to be able to finish my novel, the one that showed such promise a year ago, but feels, at the moment, as artificially wooden as this desk. “You sure picked a weird career for someone who hates to be alone,” said my dad last weekend. Or my brother — they’re melting into one brown-haired column of advice. Whoever he is, though, he’s right. Maybe I should listen to people when they tell me things.

“Begin each writing day by priming the pump,” says my friend Kyle, who has published two books.

But not all of Philip Roth. Yes, I — the writer of IKEA — own approximately 80 black-bound copies of GIFT MED EN KOMMUNIST.

This is just the surreal cherry on top of the Dada sundae that is this weird Swedish store. So many of IKEA’s individual decorative choices are pleasantly surreal — the artificial children’s artwork that decorates the refrigerators in the kitchen section, say, or the countertops with twenty empty wineglasses and as many empty bottles.

Still, 80 copies? I’m tempted to just put this down to the general weirdness, but I can’t help it: I have questions. Are the IKEA brothers or whoever great Roth fans? Or were these surplus — did Roth’s Swedish publisher wildly overestimate the nation’s appetite for I Married a Communist? Does Philip Roth ever go to IKEA? And if he does, how does he feel about all these fake living rooms with dozens of copies of his binding-uncracked, never-to-be read faux-seminal work?

As I tuck the book back next to its identical twins, I hear whispering behind me. Lo: I have been noticed. There’s a couple sitting behind me on the SEGLORA. The woman casts a little glance in my direction. Probably they are gossiping about my book selection.

No. Everything isn’t about you, I chide myself, and turn back to face the bulletin board.

Whatever happens, I should let IKEA know that this is, feng-shui-wise, not an ideal location for the KLIMPEN/LALLE. I would much rather this desk be positioned like the one I saw in the next fake office over: a big lovely monstrosity of a workspace, facing out. I want so badly to get up and push the plastic computer monitor over and settle in. That chair looks much more comfortable, though, so there’s actually someone already sitting there: a blonde girl about my age (twenty-five, which is possibly the age that existential dread hits). She isn’t writing, but neither does she seem to be seriously considering the desk. Instead she’s just sitting there staring at the plastic screen, looking sort of like I did when the Internet in the condo went out earlier today.

Like a character on a reality TV show, though, I didn’t come here to make friends. I came here to this KLIMPEN/LALLE to write, and despite myself, I am enjoying it. The circling crowd is a warm buzz on the periphery, a friendly murmur. Just the right amount of human contact.

It’s kind of a commute, from my parents’ house, but maybe I could come here every day. Bring my laptop. My storyboards. Evade capture by rotating from room to room. If I were cagey enough, maybe I could even sleep in the beds.

But I have read enough that I know it is not possible to Mrs. Basil E. Frankweiler one’s way out of all of one’s problems. Also eventually a diet of meatballs would kill a person, even me. Perhaps one day I’d like to furnish an office of my own, dammit, with furniture unselected by megacorporations.

I rise, but I am reluctant to leave without making a final gesture. Of what would my fictional Swedish persona like to remind herself each day before settling down at her KLIMPEN/LALLE?

I write on a sheet of notebook paper: I <3 PHILIP ROTH. I unstick the pushpins and affix the paper to the bulletin board.

The couple behind me on the SEGLORA is absolutely silent, but as soon as I’ve shoved my notebook into my bag and gotten a few feet away, I hear them erupt in a new flurry of whispering, and I am satisfied: there they are, putting me together, all by themselves. 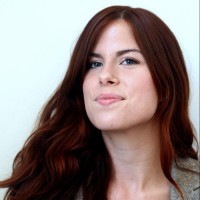