How to Love the Back of a Neck

When you love a programmer, you must to learn to love the back of his head. You must love his curls at the nape of his neck as much, if not more, than his eyes.

Learn every inch of his body, every freckle, every rib, every muscle, even when they soften with time. But know that if there is one thing you must master, it is the back of his head.

He will be forever a student, forever a learner, forever bent away from you towards a small black window.

You will meet him before he is a programmer. He will always bent away from you anyhow. His head will be bent up to behold a theater lighting rig, or stooped inside a five-gallon boiling pot of home-brewed beer. He will have his eyes trained on the road while driving you to Taco Bell across a serene Hudson River, or he will be bent over his much-loved copy of Ulysses, his eyes just as underlined as the text.

You will love this about him. You will think, “We. We are passionate. We are learners.”

You may think you love him. And chances are, you do. But realize what it is that you are loving: a neck, always strained, unable to swivel towards you without feeling the crick tighten.

He’ll explain that the code languages he learns are more efficient, more powerful, more intricate ways of speaking. Never tell him you imagine him casting spells as he hunches over his laptop. These were languages that mirror our own but also weren’t our own, a new grammar that could give answers rather than hide them, new rules for ancient punctuation.

The English language never was, and never will be, kind to him. It’s a language of rejection, abandonment, never the right phrasing, too many possibilities for heartache.

Don’t be alarmed when he becomes obsessed with programming the calories he ingests, the steps he takes, the hours of REM cycles achieved, the jagged spikes of his heartbeat. Gently encourage him until it becomes obsessive, back off when he tells you he’s doing just fine, it’s good to count all of these things, wouldn’t you want to know? Here are the answers, written in code. The code tells him something, more than ancient, meaningless words.

You will find this a challenge: keep him talking to you a little while longer.

What you will never say is this: all of this data is nothing compared to the feeling of your constant anxiety quieting when he crawls into bed beside you at night. You already know the way your heart sighs slowly when he makes you laugh. The nights you watch the sun set from his Bed-Stuy balcony are you two at your greatest, bathed in melted sherbet light under an undulating pink sky. The delicate circuitry of your heart nearly collapses the night he climbs into your bed, a little drunk and sorry he is so late, gathering you into his arms like a found goddess fallen to earth, whispering that he loves you so much.

Be gentle when he awakes from bad dreams that have no answers. One morning he will wake up having dreamt of being in his mother’s house, where he heard something hit the front door with a wet thud. When he opens the door in this dream, it will be his estranged father’s head on the stoop, wet and bleeding and opened to reveal a working brain.

When he wakes up shaking and asks you what it means, tell him the truth. There is no code for dream-reading.

The code will be his mistress. It won’t be the pixie-haired women in the shadowy doorway at the party you need to worry about, or the sexy neighbor across the hall playing foreign crooners on her turntable, or the coworker with the short skirts and filthy sense of humor.

The curve of letters slithering along the screen, poetic numbers, punctuation: that’s what will seduce him. His code will determine all of him. Those fragile feelings will depend entirely on tests of his work, run with wild eyes you can only see in the reflection of his terminal screen. Ruby to tell him if he’s an artist. Java to tell him if he is a man. PHP will tell him it he’s strong, if he’ll make the distance. If he’ll catch up to all the other programmers who have been doing this better for longer for more money.

Don’t you see, the test didn’t work, I can’t leave now, this can’t go on without being fixed.

He will stare at a screen all day. You’ll find he slouches more, his neck always aching no matter how much love you send it, how many kisses you lay upon it, his back a slow curving C.

You grow to feel tired, staring at that neck, even when you feel love for it. You tell him you’re meeting a friend for lunch, going shopping, seeing your parents, and he’ll slump more. He whispers into your stomach, does that thing where he lifts the back of your shirt, fits his fingers, knotted from typing, into your spine, softly caressing every inch of your hips.

Try to keep your spine erect, your shoulders strong, but always, always, you’ll curve into him, two interlocking Cs. When he thrusts himself inside you, wet with want, it will be to the sound of the purring laptop fan.

The end is his birthday, when you’re walking with him to the liquor store in the afternoon, and you walk along the prettiest street you’ve come across yet in his neighborhood. It’s a hidden gem, gorgeous brownstones huddled all together, a row of petite, rainbow Victorian homes. Remark how beautiful it is, the early September day, everything bathed in buttercup light. The sun is shining and it’s the first and only summer walk you will have taken all season.

He’ll agree, but you can’t help see how pale he looks in the warm light, how dark and heavy the bags under his eyes look, how shifty he seems, how uncomfortable he is away from his desk. He’ll always walks so fast whenever you two go anywhere. Let go of his hand as you stop to stare at the most perfect periwinkle house. Slightly dilapidated, it belongs at the end of a whimsical rural road, not in the middle of Brooklyn. There are whirligigs outside, plastic pinwheels and nylon flags that ought to feel tacky but don’t. A young couple laughing on the steps, the woman perfectly swollen in her last months of pregnancy. Everyone on the street will be happy and laughing but you and your partner, who keeps walking on without you, who turns around to say, “Why do you walk so slow? It’s annoying. Like you’re trying to piss me off or something.”

For all his algorithms, he’ll never figure out your speed.

When he accuses you of giving up on “we,” of giving up on him, tell him he’s not wrong. The set of the data you two have amassed together in the course of three years will be through. There will be nothing else to collect, no other courses to run. He will fail your test. He will fail you. If you stay together, you will continue to fail him, quietly, until one day he leaves you.

Leave. Only look back to know that at least the test was run. He is not yours, his is a project you must leave for someone else.

The work will never leave you. It will find you in the other handsome software engineer you meet at a party, at the bottom of translucent brown beer bottles, in the strong nape and curls of another lover down the line. On the quietest nights, you’ll still dream of the back of his neck. 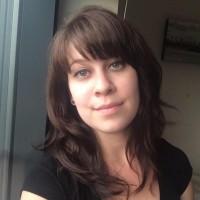 Sarah Rosenthal works in advertising by day and writes by night. Her work has appeared on SpliceLit.com and I Want You to See This Before I Leave Zine. She lives in Brooklyn. Follow her online @sarahmrosenthal and www.sarahrosenthalwrites.com.