I’m standing on the sidewalk watching a woman put on makeup in her car—concealer on her neck, to be exact—and I wonder if she has a hickey or just an insecurity that she is trying to remove, or at the very least, briefly cover up.

I am in the midst of leaving a man’s house, where I perform for an hour or two twice a week. Not a sexual act, no, just improvisational comedy, though they’re a lot alike—two people building a raft in the dark so they can float comfortably for two to twenty-five minutes in an ocean that doesn’t actually exist, trying their best to please the other person.

We have an improv coach who gives us suggestions upon which to build scenes. He is in his thirties, married, and has appeared briefly on two television pilots. If you ask him about it, he makes self-deprecating jokes about how high-pitched his voice sounds televised. The suggestions for today: “Hummingbird” then “jail” then “breadbox.”

The man who is my partner—one-half of my duo—is more than twenty years my senior, and has had a whole life before this one, as a public defender. We are not trying to be famous, or so we tell each other, we are merely trying to get better at being ourselves.

After we improvise for an hour and I leave the man’s house, I see the woman in her car putting on make-up, outside of a famous comedy theater where people come and go in plain t-shirts and fitted jeans talking quickly about their plans—so many plans—for tonight, for tomorrow, sometimes for five years from now. Occasionally I hear them whisper names like “Amy Poehler” as though they’re reciting a prayer. Often they talk about the people they know, their coaches, their friends—“Do you know him? Well, do you? You should.”

Dusk has fallen, and now I can just barely see the woman’s face in the yellow of the streetlight as she sits in her car. By now, she’s finished doing her makeup. Her mouth opens and closes slightly, as though she’s impersonating a fish. No, I realize, she must be talking on the phone or doing a breathing exercise. Maybe, she is due onstage in a few minutes. Maybe she is already a little famous—so many people here are.

There is now a line snaking out the door of the theater in anticipation for the next show, and there is so much longing in the air at this time, in the evening, on this street alone, that I wish I could swallow the whole of Los Angeles like an iridescent pill. Then I’d feel their voices rumble in my stomach: “Do you know him? Well, do you? He’s great. You should.”

Instead they might know my coach’s, who has been on two television pilots, who is self-deprecating (but is he happy? Is he? I would really like to know), and after the show I’ll make small talk with the other performers by singing his praises, and I’ll ask, “Do you know him? Do you? You really should.” 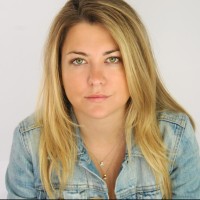 Amy Silverberg is a doctoral fellow in Creative Writing at the University of Southern California. Her work has appeared in The Collagist, The LA Review of Books, Joyland, The Offing and elsewhere. She performs stand-up and sketch comedy around Los Angeles. She likes animals doing human activities. Follow her on Twitter @AmySilverberg