When I was a kid I spent the better part of August standing with my grandfather on the spongy dirt floor of his basement, canning tomatoes and making sausages amid the smell of mold and mud. Even in the dead of winter, when the earth was frozen and the atmosphere static, the basement’s mustiness was inescapable. If you only went down there for a minute— to grab a jar of pickles or bring up an extra folding chair for Sunday afternoon dinner—the unplumbed scent burrowed into your skin and your hair. In late summertime its bouquet became heavy and shifting, creeping up the back steps and into the hall. In summertime the air seemed to be an entity all its own and I couldn’t wait to be inside of it.

My grandfather was a stoic, hunched-over man whose fingers trembled with Parkinson’s disease for as long as I knew him. He lived in a plain, milk-colored house in an indiscernible town in rural New York State. It was the kind of place you drive through and don’t notice, but it was within its bowels that I first filled up on death.

My grandfather and I would stand in the corner of the dark cellar near the cement sink, a single light bulb hanging over our heads, and spoon a piping hot stew of tomatoes and salt into clear, glass jars. We spoke very little. We left words to my grandmother, who gave us directives as she shuttled up and down the wooden steps and out to the garden and then back to the stove. She directed the production dressed in a blue flowered apron, and called us upstairs when it was time for a snack. She was also in charge of scalding the tomatoes and peeling off their skin. Each scarlet colored fruit needed to be plunged into a pot of boiling water until its epidermis puckered and split, exposing the delicate entrails that lay beneath. It was a nearly effortless process. After being submerged in hot water for only a few seconds, the protective, translucent membrane simply slipped away.

Down in the basement my grandfather and I stood at a scarred wooden table made out of an old door from the shed. Every few minutes he would fill a jar with searing hot tomatoes and pass it to me without a word. I’d place two leaves of fresh basil on top and then stretch a rubber seal around its mouth. The jars needed to be boiled for five minutes with their tops on to kill the mites and germs.

By the time they got to me, the tomatoes were clumped together and deflated, their seeds nothing but flotsam, suspended in watery pink fluid. Their sweet smell mingled with the sharp scent of torn herbs and the earthiness of the basement and my grandfather’s sour sweat. It was the most sentient smell I had ever known, and the reason I spent a good chunk of my summer vacation away from my friends and out of the sunshine, choosing instead to singe my fingers on the shadows underground.

From start to finish, the canning took less than a week and every day I’d watch the bushel basket of red fruit diminish as we simmered and sealed and arranged the jars in meticulous rows on the rickety old shelves of the pantry. “That should be enough,” my grandmother would finally say once I started lining up jars on the floor, and her judgment came as certain relief. By then, the air in the basement was thick and hot and nearly intolerable—the smell of its breath even more pronounced than when we began. Standing at the top of the cellar stairs left me feeling heady and flushed, by step number three my knees were weak . Still, after we were done with the tomatoes, we went back down to make the sausage.

My grandparents lived in town so they didn’t raise pigs themselves, but bought fresh pork from a farmer who lived a few miles away. The meat came wrapped in newspaper and packed in a cardboard box and, once it was delivered and placed next to the empty wicker basket in the kitchen, I became distracted by what I knew was inside. When the time came, my grandfather would peel off the paper to reveal bags of flesh and bone pressed tightly against the clear plastic and, even in my revulsion, I wouldn’t be able to resist rubbing my fingers over the slippery, transparent sheath, making the soft tissue ripple as if it was still connected to an animate creature.

I never wanted to touch the meat once it came out of the bag, though, but I’d watch my grandmother dump it into the sink. She’d run the faucet until the water turned clear and then cut away veins and tiny pieces of skin and place the good parts into a huge wooden bowl. She’d add a handful of fennel and chopped up hot peppers and a cup of red wine and set the bowl out in the sun on the blacktopped driveway while we ate lunch. Later, we’d feed the mixture into a meat grinder where it was pulverized into a sticky, indistinctive mass.

The thing I remember about those times, even more than the bags of meat or the blisters on my fingers or the broken pieces of bone that looked like white scars carved into the pink muscle, was the carton of long, salt-encrusted casings that my grandmother pulled out of the freezer when we got near the end of the process. They were translucent and thin as tissue paper and my grandfather, despite his tremors, handled them as if they were made of the finest silk. We’d attach each one to the end of the sausage maker and then turn the crank to release just enough ground meat and herbs to make the long thin tube fill up like a balloon.

My grandfather told me simply that the balloon-looking things were casings and left it at that, but I knew from the writing on the box that those white ruffly pouches were the intestines of baby sheep. I never ate the sausages when they were served with pasta and tomato sauce on Christmas Eve, but secretly I loved the gamey smell they left on my fingers; entrails once filled with warm excrement and bile, pulsing with life deep inside an animal’s belly. 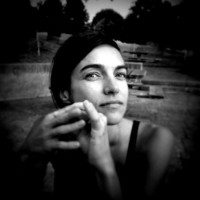 Christine Simek grew up in the foothills of the Adirondack Mountains in upstate New York. She is a reluctant kindergarten teacher, a poetry acolyte and holds an MFA from the Bennington Writing Seminars. She lives in the Hudson Valley between the river and the railroad tracks.