On My Mother and the Person I Could Have Become

The version of me that my mom spent my whole life trying to bring into existence came alive eight months ago. She took her first steps on Facebook, using my name and my face to hide behind. She used the version of my name that I adopted when I left home and stepped outside the margins of acceptable femininity as drawn and reinforced by mom and her idea of respectable religiosity. Her profile picture, ironically enough, was a four-year-old photograph of me grimacing at my sister’s phone, taken during a family dinner for which I put on the hijab so my parents wouldn’t know I hadn’t been wearing it for about seven months.

I spent years simply blocking my mother and relatives on Facebook to avoid the family gossip, bickering, and rumor-mongering. In the middle of a tough couple of weeks in my second-to-last semester at college, my sister called to let me know that my mother was demanding I take down my Facebook profile picture, a picture of me looking at the camera with a cigarette in my hand. I told my sister no; my Facebook page was mine. A few hours later, my sister called again to let me know that my mom had bribed her into creating a fake Facebook account for me. Mom didn’t want to risk people seeing pictures of me smoking, shaving my head, or hanging out with people who were obviously not Muslim.

I checked the fake Facebook page, amazed at the person my mother had concocted — a person who described herself with a mix of poor grammar and unlikely goals: “I’m 21 and the only thing I need in my life is Islam and Allah. I hope everyone can find peace and happiness like me by being the best religious version of themselves. I hope one day to be a good wife to my husband and to be a good mother to my many children :) InshAllah i succeed in life!”

At the time I was too stressed out by grad school applications and the end-of-semester workload to do much more than show it to my friends and laugh. But as the weeks passed, I couldn’t shake the feeling that there was another me out there, wearing my face and carrying my name. I checked the page periodically to see the list of friends grow as my mom used the account to add relatives and friends of family I hadn’t seen or talked to in years. Through fake me’s page, I found my half-brothers — who I haven’t talked to in six years — the aunt I had seen twice in my life, and my ninety-something grandmother.

I thought mom’s attempts to keep up the charade that I was the daughter she raised me to be would stop at creating the fake Facebook account, but I soon found out she was also paying my sisters to impersonate me in conversations over Facebook with relatives and family friends. My mom also pretended to be me in conversations with aunts and cousins I barely knew. During a conversation about these hijinks, my therapist first laughed at the description of me my mother had put up for the world to see, and then looked at me thoughtfully. “This must hurt,” he said.

I didn’t know how to confront my mom about the fake account. It was clear that it gave her some sort of satisfaction I was unable to provide, but it also seemed to be a signal that she had given up on trying to mold me into the daughter she wanted me to be. Despite my frustration, I was also upset that she had stopped trying.

My feelings about our relationship often changed depending on my mood and how secure I felt in the choices I was making. After a day spent with my friends and chosen family, it was easy for me to laugh off my mother’s actions because I had proof, cuddling next to me on the couch, that I was loved for who I was. But when I started getting rejections from different grad programs to which I had applied, I felt angry with my mother and simultaneously terrified that the person she’d created was the person I was really supposed to be – the version of me that could actually succeed in life.

My mother was the one who nagged me into putting on the hijab when I was eleven, ignoring the obvious signs that I had taken it off and was only wearing it in her presence by the time I was nineteen. She pushed me to start fasting Ramadan when I was nine, and pretended to believe that I was still doing so when I was twenty-one.

What my mom doesn’t like, she often tries to ignore. The fake Facebook account seemed like just another way for her to try and ignore the very real person that I have become. When I tried to express my anger at what she had done, she laughed it off and told me that my aunts were so happy I had come back to Islam and started wearing the hijab again. I tried to point out that that wasn’t me, and that she could only keep up the charade for so long, but she waved off my protests. She then told me of the numerous marriage proposals fake me had gotten from “religious” men on Facebook, snidely informing me that at least I had options. After graduating university a few months ago, I moved in with my parents while I look for a job. Now I’m actually being introduced to some of the family friends and relatives that “Mom Me” had been having conversations with on Facebook.

Somehow my mom is able to keep up the illusion of religious, hijabi, online me, alongside real, short-haired, cigarette-smoking me, at least in her own mind. Mom Me is religious, therefore good and virtuous. Real Me is not religious, therefore bad and corrupt. A small part of me worries this unusual brand of wish-fulfillment could eventually beat me into submission, so that one day I will wake up as the person my mother has tried to create, a person who is the polar opposite of who I am.

The fake me created by my mother has come to mirror the differences between her and me — two sides of a coin that can’t be reconciled. I was supposed to want marriage and children. I was supposed to find peace in Islam. I wasn’t supposed to run off to a liberal arts college, get fifteen tattoos in the space of two years, and leave religion and tradition as far behind me as I could. I have always hidden parts of myself from my mother’s overly curious eyes — my music, my books, and my writing. As I grew older, I started hiding my friends and relationships, too. The most obvious manifestation of this double life happened when I took off the hijab but still wore it around my family, because I didn’t know how to tell them that I didn’t want to wear it anymore.

There is a part of me wonders if my mom’s desire to remake me in her image is an attempt at recapturing her lost youth. At my age, she was already married and pregnant with me. My father was twice her age, and already married with children when they met; my mother was his second wife, a young engineering graduate he taught in college who, I imagine, was meant to make him feel young again as he struggled through a mid-life crisis. My mother’s twenties were marred with a difficult marriage and an even more difficult divorce. She moved back in with her parents after her divorce; moved back to a small town where she was ridiculed. She tried to support my sister and me by working at various dead-end office jobs, where she had to battle the propositions of older men who considered her fair game because she was divorced.

But in her late twenties, my mother married her high school sweetheart and one-time fiancé, and he helped her find a job and move to a new country, eventually adopting my sister and me as his own. When I think about the trajectory of my mother’s life, I’m amazed that the person who survived all of this scandal and heartache chose to raise me to feel shame in being a woman. One of my mother’s favorite refrains is that a woman’s voice is Awrah — something to feel ashamed of, something to be hidden. Yet my mother herself has never been a person to stay quiet in the face of something she didn’t agree with.

Perhaps she now believes that if she teaches me to be quiet, I won’t suffer as she did.

In trying to relate to my mother, to find something within her with which I can still align myself, I try to draw strength from the part of her that insisted on completing her education when her parents were pressuring her to get married instead — the part that caused her to leave an unhappy marriage and a powerful husband for the sake of her safety and the safety of her children — the part that dared to forsake comfort in favor of independence. While that side of my mother doesn’t seem to exist in the person she has become, I have tried to emulate that side of her anyway; make that part of her proud. I write my stories under my own name because, just like my mother before me, I demand honesty and respect. Because, one day, I hope to draw that side of my mother out again, so that we can finally be honest with each other. 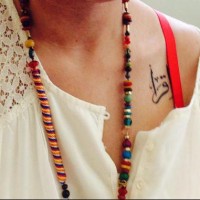 Rabha Ashry is a writer. She hopes to make a career out of her experimental poetry and her no-sugar-coating-allowed feminism. Every few months she writes about this almost writer life on Twitter.