“A’ghailleann”: On Language-Learning and the Decolonisation of the Mind

Here are the things you need to know first. I am thirty years old. I am Indian. My parents arrived in Scotland as newly minted immigrants in the eighties, thinking they’d go home after I was born. Decades later, we’re still here.

My parents, grandparents, cousins, aunts and uncles, their friends and their community, speak Hindi as a first or joint first language. I do not. I stopped being a fluent Hindi speaker at the age of six, perhaps earlier. The school didn’t like it. Too confusing to educate a bilingual child. If you don’t speak to her in English at home, she’ll never learn.

Gaelic, sometimes referred to as Scottish Gaelic to differentiate it from Irish and known to its own speakers as Gàidhlig, is a Celtic language spoken by just over 58,000 people. It has been in decline for centuries. Anglicisation, colonisation and the Highland clearances all had a role in destroying its traditional heartlands, driving it to the far northwest of Scotland and the islands. In the nineteenth century schoolchildren were forbidden to use it in the classroom; by the 1970s the last monolingual speakers were gone. To speak Gaelic now is a political act.

I am not very good at languages.

On a torrentially wet Easter Sunday, I arrive on Skye for a short course in beginners’ Gaelic. Sabhal Mòr Ostaig, the world’s only Gaelic-medium institute of higher education, offers this immersion course every spring and summer: a week for Gaelic learners to spend among a wholly Gaelic-speaking community, where everything from the lunch menus to the prospectuses to the signs for the toilets is in Gaelic.

The view from the college has a smudgy beauty, the peaks on the mainland just visible across the sweep of water, but the rain hammers down. At the registration desk, I gather up all my courage and say: “Tha mi duilich. Chan eil Gàidhlig agam.”

“You’re wrong,” says the woman sitting behind it, in English. I am instantly terrified. “Say, chan eil mòran Gàidhlig agam.”

I have tried and tried to learn Hindi over the years. Trying to speak it at home was painful and self-conscious. Just try, my family said. It doesn’t matter if it isn’t perfect.

(I wanted someone to say: there’s nothing wrong with you. Instead, my relations clapped their hands and summoned everyone in the house. “Guys! Come and listen to the cutest mistake she just made!”)

Attempts at formal study were worse still. “Don’t worry,” said the teacher I found on Gumtree, giving classes out of her front room with children’s books from the eighties. “Everything’s going to be fine. We’re going to fix you.”

“Really,” I said, and never went back.

My first day at Sabhal Mòr Ostaig goes well. I’m asked to introduce myself and say where I’m from. “Not where you’re living,” the tutor cautions. “That’s a different question, which we’ll get to. Where are you from? Who are your people?”

I make a note. That night there’s a pub quiz, bilingual for the benefit of the learners. I watch as one of my new classmates goes to the bar, consulting the dictionary on her phone. “Tha sinn ag iarraidh – er. Fion. Pinc? Shit.”

The bar staff fall about laughing. I am waiting in the doorway, thinking of those dozens of family parties, and every time I have stood in a crowded room humiliated by my own ignorance.

When the bar staff have collected themselves, they explain that no one has asked them for rosé before; that they’re sorry they don’t have any; that they will try to get some for us in advance of the ceilidh on Thursday. The explanation is conducted via Gaelic, English and emphatic gesture. When it’s my turn to order, they tell me: just try it. They don’t laugh when they’re getting my wine.

In the morning I explain to the tutor that although I have lived in many places, in England and America, my people are in India. Tha mi às na h-Innseachan.

Just try! It doesn’t matter if it’s not perfect.

But when it’s your own language, it does matter. It matters when it’s your own people who are laughing behind their hands at you. It matters when you’re seventeen, painstakingly reading a road sign, and passing strangers sympathise with your parents. And it matters in adult language classes, when you can’t relax and laugh at your own mistakes like the other learners, because of the constant, drumbeat internal litany: you should know this. You should be better than this.

And, as ever, it matters because the personal is political. It matters because Hindi, like Gaelic, is a colonised space. It is a language complete in itself, with its own history, literature, poetry and tradition. But more than sixty-five years after Indian independence, it has been surrounded and absorbed by English, so among the Indian middle classes it is no longer a prestige language. It is the vernacular, the language one speaks at home; one does not use it to write to the tax office, nor take one’s degree.

So if it doesn’t matter if it’s not perfect – if it doesn’t matter if a noun is masculine or feminine; if a verb falls to be transitive in the past perfect; if you just use the English word, because who can remember the Hindi for mathematics or apartment or transubstantiation – then for all I wage my small battle, we’re losing the war. To speak our language perfectly – to choose to do so, despite decades of colonial influence – is another political act.

It would be easier to preserve Gaelic, my tutor notes with some resignation, if it weren’t so fiendishly difficult.

But it’s a matter of practice. After a few days of listening and learning, I find I can order elevenses at the campus café, and understand that the sign in the bathroom is telling me not to flush tampons down the toilet. Looking out over the harbour, I suddenly grasp the meaning of the Gaelic word glas, not grey or green but in-between, the colour of the sea beneath a turbulent sky. Gaelic holds the Highland landscape in the weft of it, the sound of running water in its flow and fall. It demands time and hard work, but that denotation of beauty will become a part of me.

On day four, my friend and I buy a whole plate of scones by mistake.

“It’s fine,” she says, clapping me on the shoulder. “I need the food, I’m living on Barra forever.”

My family are priests and academics. They are scholars of a language I don’t speak.

But here’s something I wish I’d known earlier. Hindi, like Sanskrit before it and several other modern Indian languages, is written in Devanagari script. My grandfather, a native Hindi speaker, taught himself the alphabet in his thirties. He had been to school during the British Raj, so he had never learned.

On my last night on Skye, there’s a ceilidh, raucous and wonderful, the dancers twirling through the long northern twilight. Just before midnight, a storm hits the coastline with a shattering violence. Before the party breaks up, someone brings the news everyone expected: there won’t be any ferry sailings tomorrow. I’m not going to be able to leave the island on schedule, and I’ll miss my rail connection on the other side.

I’m still blurry with the promised rosé, grasping at possible options, when one of my classmates comes to find me. If I can be ready to go straight after class, she says, I can come with her in the car over the Skye Bridge, and by way of a hundred-mile detour through the Highlands, we can make it to Fort William before the last train rattles through. Thanks to her kindness, I will reach Glasgow only a few hours later than planned, and in time to meet the southbound connection in the morning.

“Tapadh leat, a ghràidh,” I say, with sincere and heartfelt gratitude, and then with wonder, as the words come to me without thinking. Despite everything – despite the encroach, decline and forgetting; despite the relentless pressure of history – it is still a living language. I am sparkling with pink wine, battered by the oncoming storm, thousands of miles from where I come from: but it lives with me.

Here’s how the story is supposed to end. That because I went in search of another colonised language, my own comes easier to me; that what was lost can be found.

But that’s not how it goes. Gaelic will never have monolingual speakers again. My native language is gone forever. Relearning it is possible; decolonisation of the mind is possible. But I have been changed, first by the forgetting and the relearning. What is left is post-glacial, a landscape irrevocably altered.

I have a Hindi teacher I like these days. She talks about tenses and conjugations, oblique noun cases, the inflection of postpositions. She thinks my grammar leaves a great deal to be desired. She doesn’t think there’s anything wrong with me.

“Where were you during the holiday?” she asks, in Hindi.

I don’t know how best to say it in Hindi, so I use the Gaelic word: Gàidhlig. It is a language, I explain, that they speak in the high places of Scotland. It is very beautiful. People are afraid it will be forgotten, so they are working hard to remember it. I am one of those people.

That was very good, my Hindi teacher says, but you can do better. 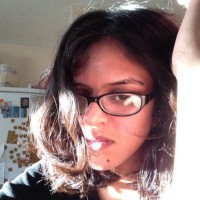 Iona is a writer, lawyer, and linguaphile, and the product of more than one country.