An Interview With the Mom of a Baby Model

I’ve known Kate since high school, where we were friendly and I also silently worshipped her from afar.

Kate, now an attorney, is still lovely and funny and smart and she appears to have passed her good genes onto her daughter, whom she calls Poppy. Of course, many children are cute, beautiful, charming, and so on, but in this case, Poppy is professionally so. At not even two years old, she is a full-on baby model.

Do you secretly want to know what the world of child modeling is like? I sure do. And I was fascinated that someone who has such a sarcastic personality and strong bullshit detector would willingly enter this world. Fortunately, Kate was willing to talk.

How old was your daughter when you took the first steps to get her into modeling?

I think she was about 7 or 8 months old when I finally decided to send her pictures to some agencies.

What made you take the plunge and actually pursue it?

I figured that if it was possible for her to make some easy money for her college account I should look into it. Also, my husband was a child model and both he and his mother had nothing but good things to say about the experience so I figured it was worth checking out. I was also curious about what the whole “industry” would be like and would be lying if I said I wasn’t interested on an anthropological level…though I am also afraid that I may end up like Mama June.

Before people began telling you that she should get into modeling, did you suspect that you had a more-attractive-than-average child?

No. I routinely made family and friends tell me if they honestly thought she looked like Shrek because I knew that as a mother there is no way for you to really gauge the attractiveness of your baby. Even now when I know that she is objectively “pretty” I can’t see it because to me she is just the face that I love more than anything on earth.

How many shoots has she gone on thus far? What was the easiest and what was the most difficult?

She has had four jobs. Two for Carter’s, which were a lot of fun, and two for other brands nobody has ever heard of. The Carter’s shoots were definitely the easiest because they are really designed with the babies in mind. They always have a nice play area for the children and they are very flexible with napping and feeding schedules.

The most difficult shoot was one that occurred in a studio in SoHo that was essentially a baby death-trap and was staffed by depressed 20-somethings and a photographer who didn’t know anything about small children and kept asking me to get P to do things that are basically impossible for a 12-month-old child. Like sit on top of a blanket without moving while quietly smiling in the opposite direction of where all the people and noise are. He also made me act as a photo assistant and then yelled at me when I couldn’t arrange things the way he wanted them. Then at the end of the shoot he asked if he could kiss Poppy. So that one was great.

What have been your biggest surprises thus far? What has totally lived up to your expectations/suspicions about child modeling?

I think my biggest surprise so far is that for the most part the other parents involved seem pretty normal. I’ve noticed that the parents of the older children seem like real stage moms but the parents of the baby models seem like they are just happy to be around their kids and to get to see their pictures. Actually, that’s not the only big surprise. I was really surprised at how happy I felt when I saw her picture in an advertisement. I never thought that I would care about that but I have to say that it is really nice to see a high-quality, beautiful, happy picture of your child outside of the snapshots in your little family/friend circle.

Has her success gone to her head?

Yes. She is a tiny little bitch now.

Just kidding. It hasn’t yet but she definitely enjoys the attention that she gets on a shoot so that is something I am going to have to monitor if we continue.

How do you make other parents with unattractive children feel a little less terrible in your/Poppy’s presence?

I really hope people don’t feel that way. I’ve never encountered someone where I felt like, “Oh shit, that kid is hideous and his mom probably feels like shit about it. I better say he’s really good at something.”

You don’t have to talk specifics but in terms of how Poppy’s been compensated, is modeling going to pay for a week of college? A semester? One meal?

Babies don’t get paid very much, relatively speaking, unless they get film work (like commercials, TV shows, etc). I don’t even know what the compensation for that kind of stuff is but I’ve heard that’s where they start to make money. Babies are limited to working no more than two hours in a given day so they can’t be compensated like older children. Also, multiple babies are usually cast for a given job so that there is always an extra in case one goes nuts or gets sick.

Primary babies (the ones originally cast to be in the shoot) usually get compensated more than standby babies. For Carter’s, Poppy was originally cast as a standby and for the first day of the shoot she wasn’t used so we got paid a flat rate of approximately $175.00 for the day. When they decided to use her we got paid around $270.00 for the day. For her first Carter’s shoot she made about $750.00. I don’t know what she made for any of the others because we haven’t gotten paid yet. It usually takes three months to get paid and then the agent takes 10%. I don’t know if the same rules apply for older children.

How long do you think you’ll pursue this with her?

I don’t know. It really depends on a lot of different factors. In addition to looking a certain way, children have to have a certain type of personality to get work: they need to be extremely outgoing and friendly. So far Poppy’s personality has been a good fit but as she gets older that may change, especially as she makes the transition to full-blown toddlerhood. I would definitely stop the minute she stopped enjoying it and I am also concerned about her getting too much attention for her looks, as opposed to other more important qualities such as kindness and intelligence.

It’s also a pain in the ass for me because I’m the one that has to take her to auditions (they are called “go-sees”) which are often at the last minute. It’s worked out for us this past year but that may change in the future.

What advice do you have for parents contemplating getting into the biz based on what you’ve learned so far?

I would say that parents should expect to spend some money to get the process going. You have to get professional headshots and comp cards made at your own expense – this is what is used to get the kids invited to attend go-sees. I would also say that you should prepare for rejection and understand that it doesn’t mean your baby isn’t fabulous; he or she just isn’t right for that particular casting. I would also say that unless you want to be an evil stage parent expect that your small child is not always going to cooperate, especially when being asked to do very un-child-like activities such as standing still after being made to wait for 20 minutes. I would also recommend you not call your child an “asshole” like one mother I met unless you yourself want to look like an asshole.

What seeds has this planted in your mind about what you’re going to teach Poppy about women’s relationships to outward appearance when she’s older?

I’m not sure that I am going to do this long enough for Poppy to even comprehend that it is about her physical appearance (and not just adults being nice to her), but I plan on teaching her from babyhood on that the qualities in her that her father and I will value most are kindness, empathy, intelligence and humor. Hopefully she develops a healthy sense of self that incorporates all of those…and if baby modeling turns her into a monster then I am the giant asshole and I will kill myself. 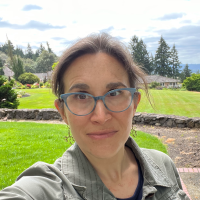 Claire Zulkey lives in Chicago and runs Zulkey.com where you can learn everything you need to know and more.