Which Mountain Goats Song Should You Be Listening To?

If you’re sad because you miss someone, but you’re also really hungry:
a) if the person is probably dead: Seeing Daylight
b) if you’re still pretty numb about the whole situation: Alpha Omega
c) if you have a sweet tooth: Jam Eater Blues

If you haven’t had sex in a really long time:
a) if you then have sex: How to Embrace a Swamp Creature
b) if you will probably never have sex again: Autoclave

If you really shouldn’t have had sex with the person you just had sex with: Golden Jackal Song

If the person you’re in love with is a real pill:
a) if you’re feeling pissed about it: Pseudothyrum Song
b) if you don’t really care: Orange Ball of Love
c) if you like Greek mythology: Deianara Crush

If you’re in a mutually destructive relationship and it’s making you passive-aggressive: Spilling Toward Alpha

If you’re in a mutually destructive relationship and you feel like you have to honor that: Old College Try, Alpha Rats Nest

If you’re in a mutually destructive relationship and you don’t give one good goddamn: No Children

If you’re fucking tired of hearing from this person who doesn’t love you anymore. If they’re so fucking sure they don’t love you, why do they keep sending you fucking postcards?: Source Decay

If you have literally no idea how to take care of babies:
a) immediately after birth: San Bernardino
b) some days later: Pink and Blue

If you’re pretty sure your only meaningful interactions these days are with wild animals, and that doesn’t bother you as much as it should: Snow Owl

If you and the person you love are both in relationships with other people:
a) if you’re sad about it: So Desperate
b) if you’re happy about it: Alibi
c) if you’re in denial about it: Going to Maine

If you’re in love with someone and it feels absolutely terrible:
a) if you’re unable to talk about it: Alpha in Tauris
b) if you have a child: Poltergeist
c) if you’re in a car: West Country Dream
d) if you like Soviet-era geopolitical similes: International Small Arms Traffic Blues

If you’re in love with someone and miserable for other reasons:
a) if you feel that you will never be entirely comfortable with anyone: Riches and Wonders
b) if you sometimes go for walks by yourself late at night: Moon over Goldsboro

If you’re in love with someone and it feels OK, but you’re pretty sure it’s going to get worse from here:
a) if you’re still trying to have a good time: First Few Desperate Hours
b) if you’re pre-emptively having a very bad time: Letter from a Motel
c) if you like ominous imagery: Tallahassee
d) if you like references to Aristotelian poetics and you’re in a car: The Recognition Scene

If you’re in love with someone and it feels great, but that’s mostly because you’re a teenager and you don’t have a lot else to feel good about:
a) if your partner is slightly exploitative: Dinu Lipatti’s Bones
b) if your partner is slightly criminal-minded: Attention All Pickpockets
c) if your home life is very bad: Broom People
d) if there are UFOs: Tulsa Imperative
e) if you’re high on pills and you’re in a car: Dilaudid

If you’re not really in love anymore, at least not in a way that an impartial observer would recognize
a) if your job gives you lots of vacation time: The Mess Inside
b) if you spend all your money on ephemeral goods: Fault Lines
c) if you blame your partner for the whole situation: Standard Bitter Love Song #4
d) if your partner smokes: Orange Ball of Hate

If you and the person you’re in love with are separated, period:
a) if it just happened: Woke Up New
b) if it happened an embarrassingly long time ago: Half Dead
c) if it happened in a parking lot: Somebody Else’s Parking Lot in Sebastopol
d) if you’re very bitter about it: Standard Bitter Love Song #1
e) if you’re very bitter about it and have a gun: Black Molly
f) if your sadness feels like such a permanent and physical presence that you’re thinking maybe you should start introducing it at parties, like, “Hi, I’m John, this is my sadness, nice to meet you”: Waving at You
g) if they owe you an improbably large sum of money: Alpha Desperation March

If your actual relationship status is unclear, but you think everything might eventually be OK:
a) if this is because you are aware of the transience of both pain and happiness: We Were Patriots
b) if it’s because you’ve just had a tulip-related moment of catharsis: Minnesota
c) if there are dogs nearby: Weekend in Western Illinois 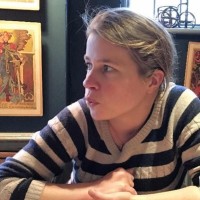 Emma Stanford is a library assistant working in the UK. She rings bells a lot.