What Would Lorelai Gilmore Do? 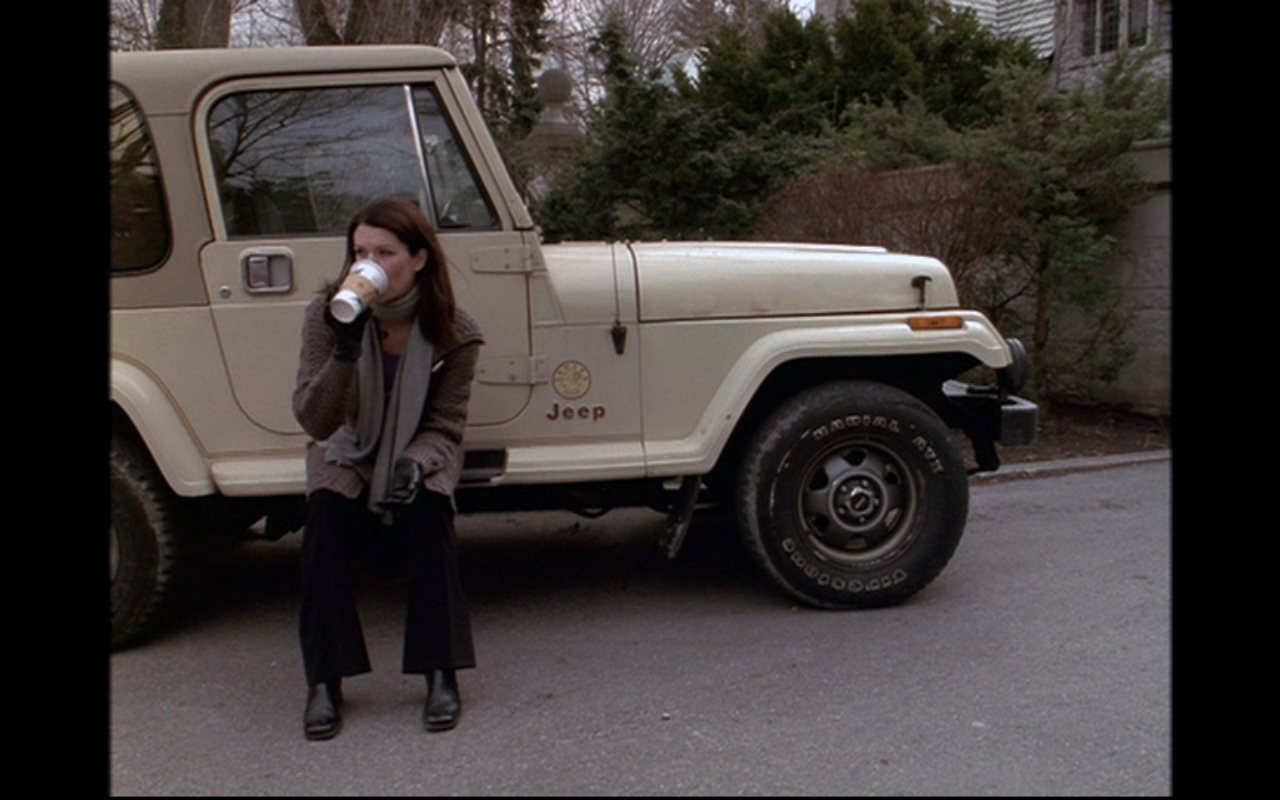 When I was 15, I thought Lorelai Gilmore was perfect.

Not actually perfect, I wasn’t so naive that I couldn’t see her flaws, but she was my ideal, the person I most wanted to be if I could crack the code: witty, charming, smart, beautiful, resilient…able to converse with men without turning bright red or stammering. The fact that she was messy, that she couldn’t cook, that she was prone to tardiness and putting her foot in her mouth, that she was a bit of a steamroller, well…those flaws and shortcomings weren’t so different from my own. Lorelai Gilmore was the coolest person I “knew,” but something about her still seemed attainable. 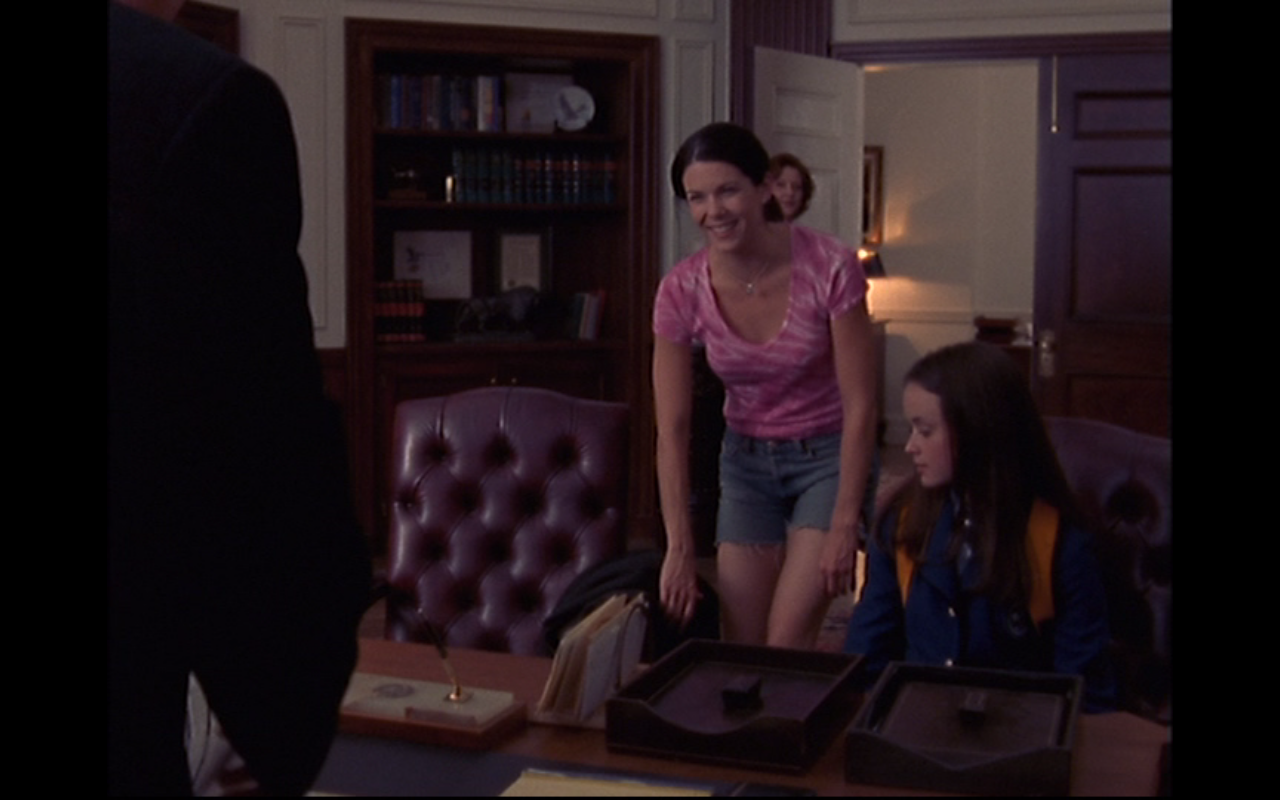 Gilmore Girls swallowed me whole as a teenager. I had loved TV shows before–my fifth grade Sabrina Spellman Halloween costume is worth noting here–but I’d never been devoured like that. Gilmore Girls was the right show and I was the right person and it was the right time and by the end of the first season it felt like we had been knitted together and then knotted with some sort of unbreakable sailor knot. The show became a part of my identity, and also something sacred. A biblical text. 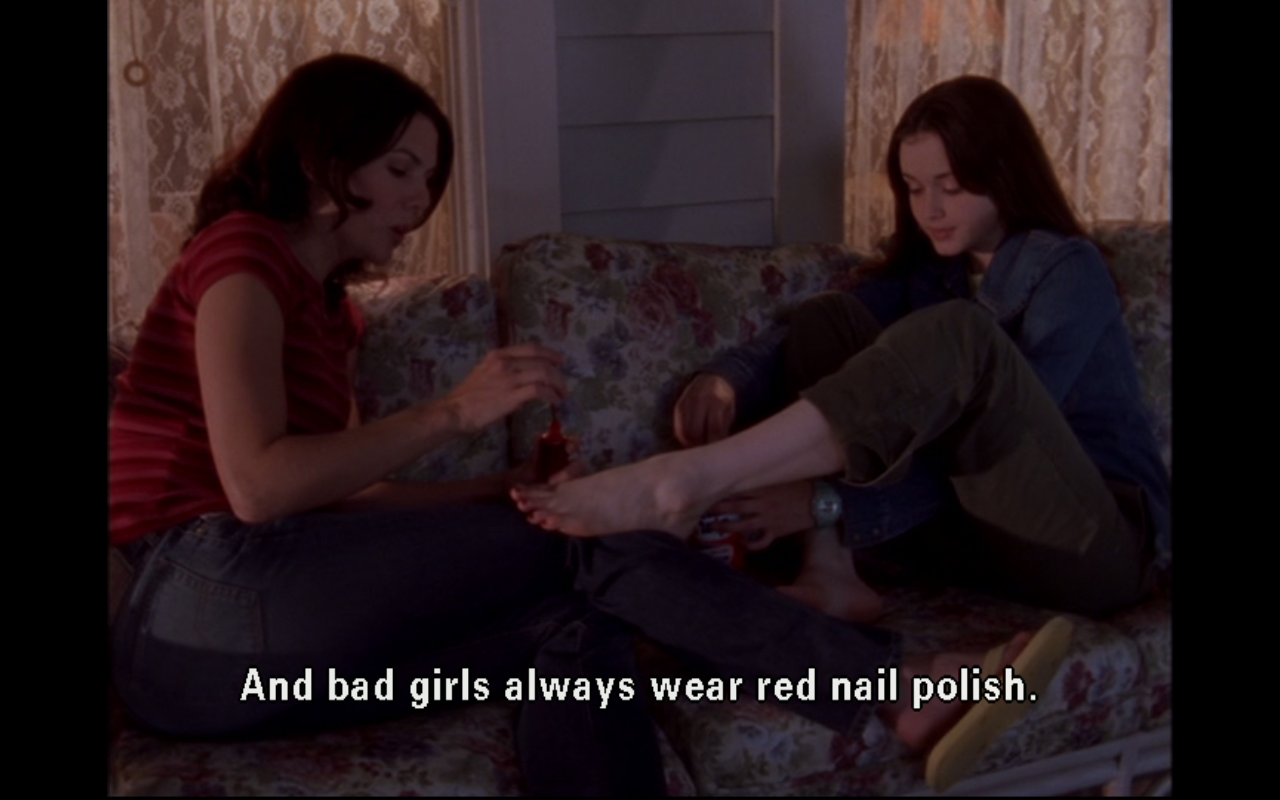 That was how I often treated it, anyway. Gilmore Girls was my guide book, a lesson plan for How To Be. I wanted to grow into Lorelai, with all her charm and dazzle and guts, and the way to do it, I thought, was to fold myself into her world. Immersion, after all, is the quickest way to achieve fluency. 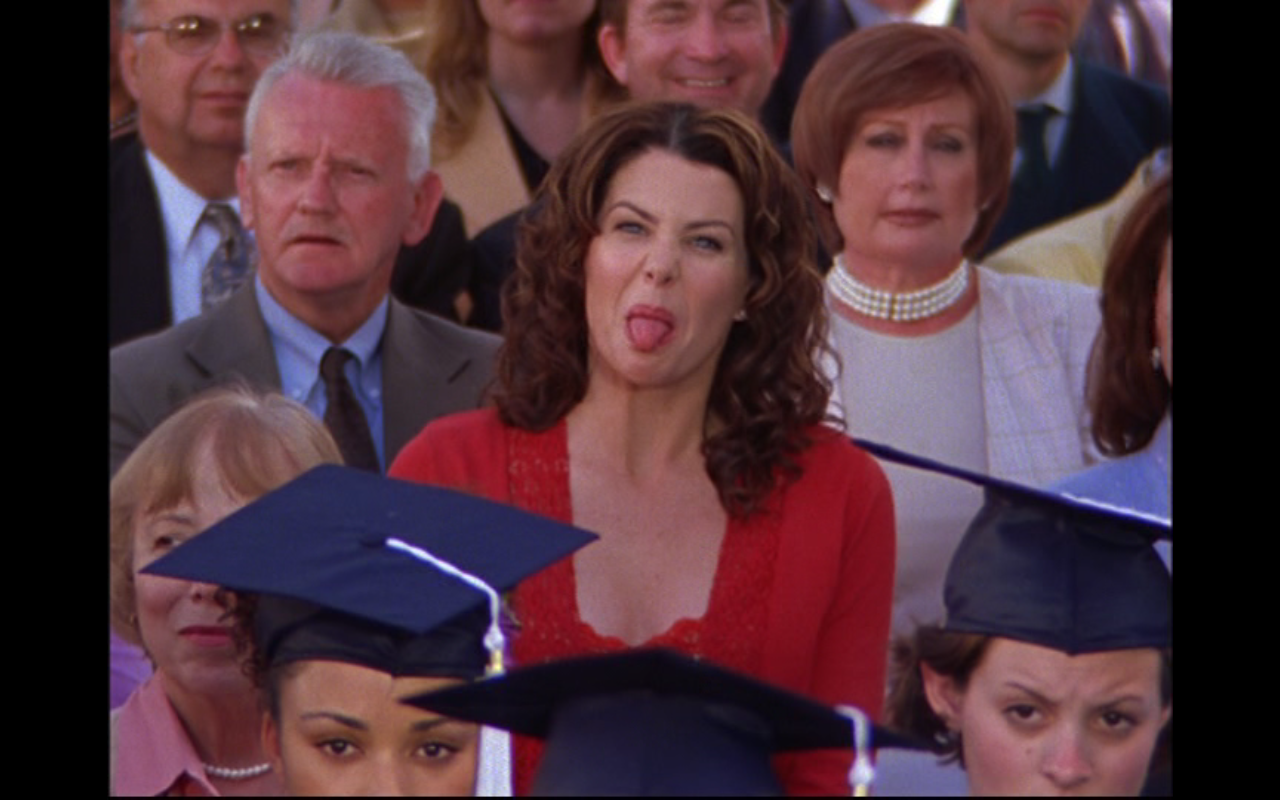 I wore clothes I thought Lorelai and Rory would wear, watched movies they referenced, read my way through as many of Rory’s books as I could, listened almost exclusively to the Gilmore Girls soundtrack, and the music that had played on the show, and the music that had been mentioned on the show. I pored over their pop culture references, hoping to be able to identify them without the help of Google. I tried to talk like a Gilmore, and while I never stretched my wit much beyond a slightly-too-mean sarcasm, I certainly sped up my tongue–I don’t think I had a single conversation with my grandmother past age 14 that she didn’t ask me to speak more slowly.

I embraced a degree of Gilmore-ness in other ways, too. I painted my bedroom yellow one summer, so it would look more like it belonged in Lorelai and Rory’s house. I tried (and failed) to teach myself to like coffee. Much of the initial appeal of the college I ultimately attended was the Stars Hollow-esque charm of its small town.

I did skip a major step in the Be Like Lorelai guidebook: I didn’t get pregnant at 16. I don’t think I could have if I had wanted to–perhaps unsurprisingly, my romantic prospects as an awkward teenager that talked almost exclusively about a WB television show with the word “girl” in the title were somewhat…slim. I knew enough to know that teen pregnancies generally didn’t work out as well as Lorelai’s. Even if I didn’t, my mother liked to remind me on the regular, just in case I was getting any ideas. 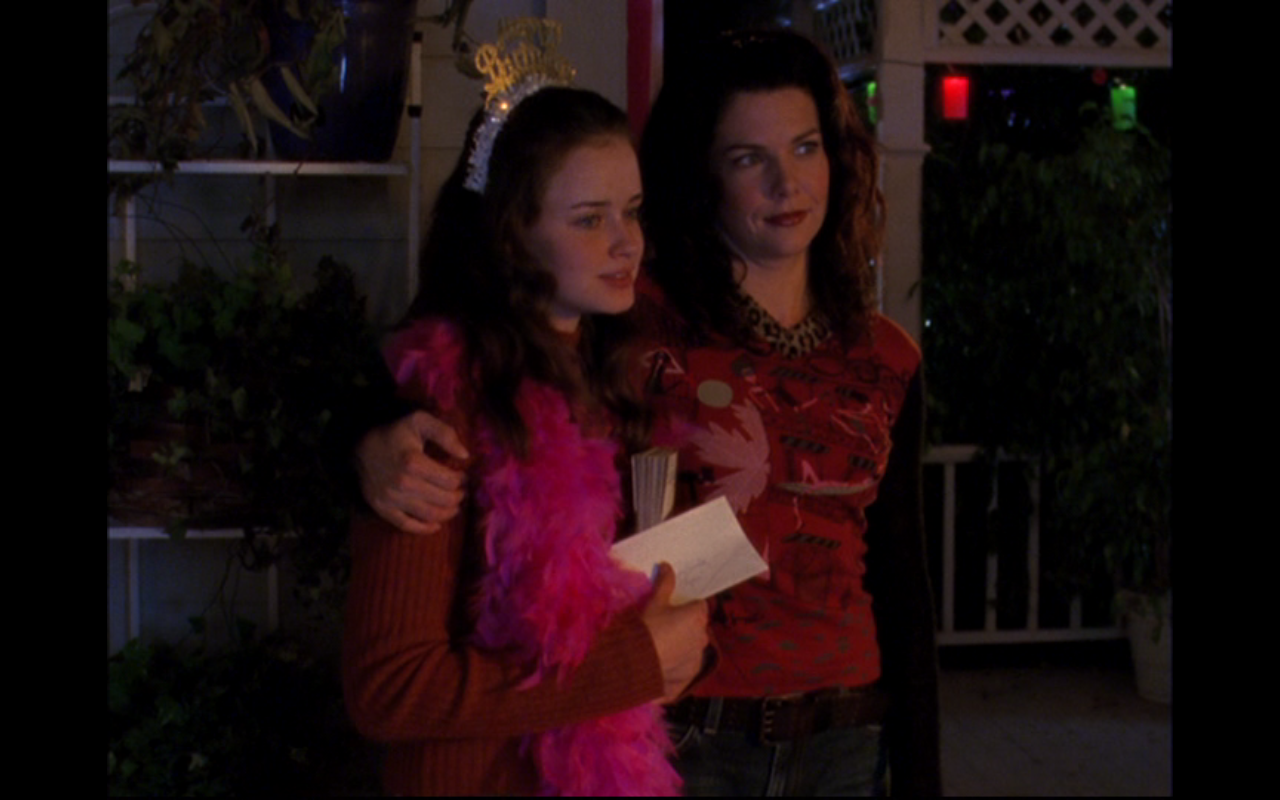 Back then, I don’t know if I could see how significant that aspect of Lorelai’s life was to who she was as a character, how she could be a selfish person but for Rory, for whom she would sacrifice just about anything. When Lorelai was my age, she was solely responsible for a nine-year-old. I’m currently debating the emotional and financial commitments of adopting a cat.

Lorelai, though, was always a mother first. It was easy for me, as a teenager, to be more caught up in the Lorelai/Luke waiting game and writing endless pages of Rory/Jess fan fiction, but from the start, the central relationship on Gilmore Girls was the mother/daughter bond between Lorelai and Rory, and the show was always a story of Lorelai’s sacrifices, of the dreams and experiences that she had given up or put off so that she could have Rory: college, travel, adventure, independence… She put everything she had into being a good mother, giving up her own ideas about her future so that Rory could have everything she needed, and she rarely demonstrated regret. She turned her lemons into the sweetest and most flavorful lemonade imaginable. And when being the best mom possible meant doing something she didn’t want to do, like going to her parents for financial help, she still did it.

I may have been aware of some of Lorelai’s more superficial flaws when I was a teen, but as I’ve gotten older it’s been easier for me to see her more serious shortcomings.

While Lorelai was a great mom, she wasn’t often a great daughter. The door she opened in the pilot, in asking her parents to pay for Rory’s education, is one she had kept tightly closed since she left their home 15 years earlier, and once she cracked it open she struggled to control what came through. 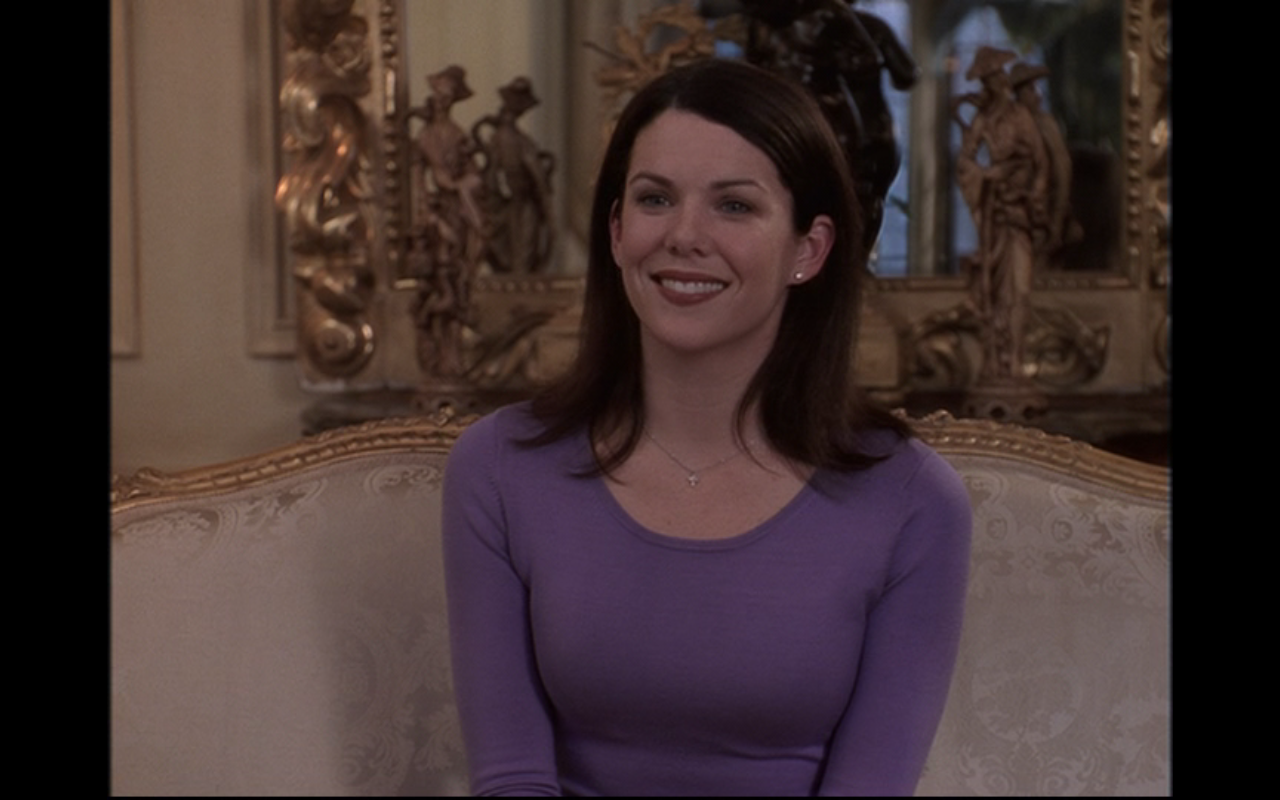 The two-steps-forward-one-step-back nature of Lorelai’s relationship with her mother was often a demonstration of Lorelai at her worst and her most selfish. While Emily was usually well-meaning if misguided in her attempts to reintegrate herself into her daughter’s life, Lorelai’s knee-jerk reaction to her mother was almost always rejection. The moments when they did find some sort of common ground, over Vicious Trollop lipstick or bridal tiaras or, most often, Rory, were all the sweeter for their inevitable derailments. When one of them managed to crack the other’s shell there was genuine love to be found, but those cracks were hard to come by. 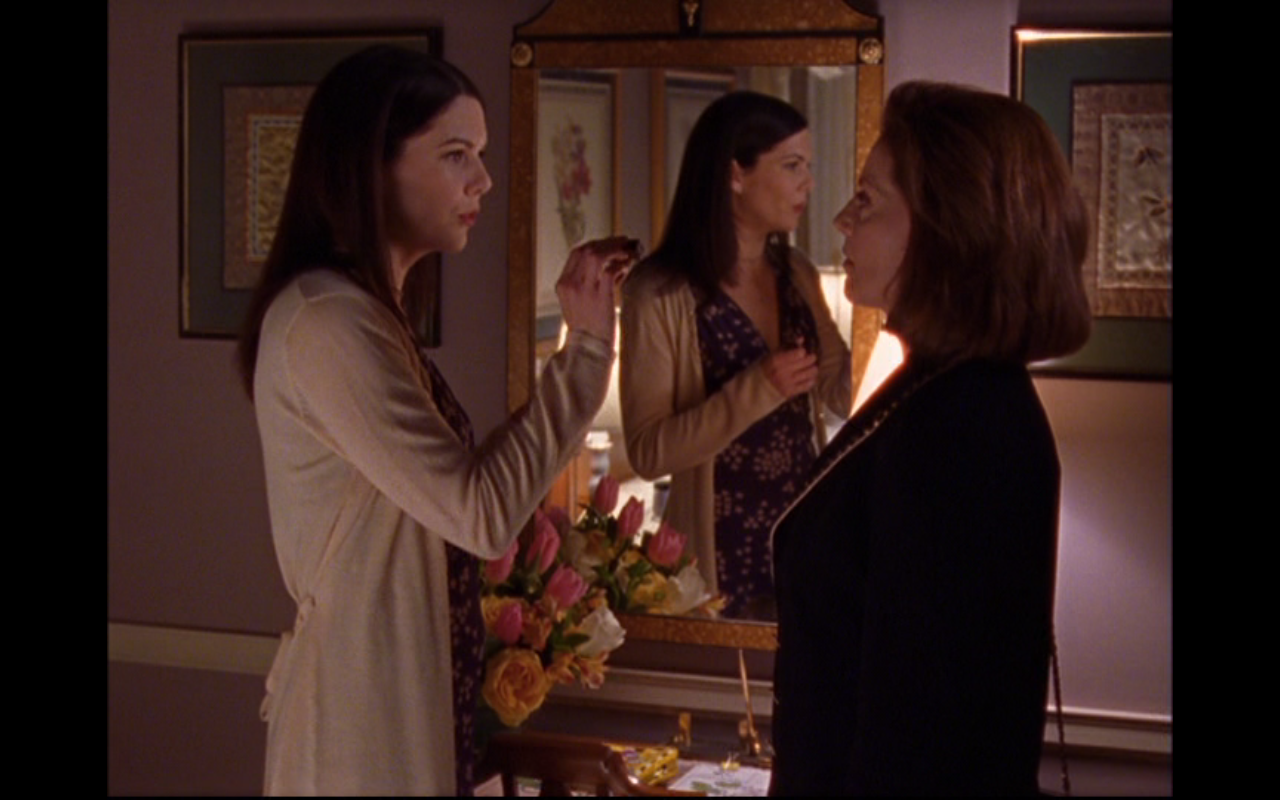 Lorelai’s relationship with her father, meanwhile, was even more strained–Richard’s journey from resigned parental disappointment in the pilot to telling Lorelai how proud of her he is in the finale was long and often wrenching. Theirs was one of the show’s best and least celebrated relationships.

Lorelai could be a steamroller, bullying Luke into things like painting his diner and then failing to show up, and she could put her foot in her mouth at the worst possible time, accidentally ending up in the middle of Sookie and Jackson’s marriage, for example, but her relationships in Stars Hollow were built on a strong foundation of love and community that tended to trump her mistakes. Lorelai struggled when the mistakes she made fell outside of the Stars Hollow bubble. 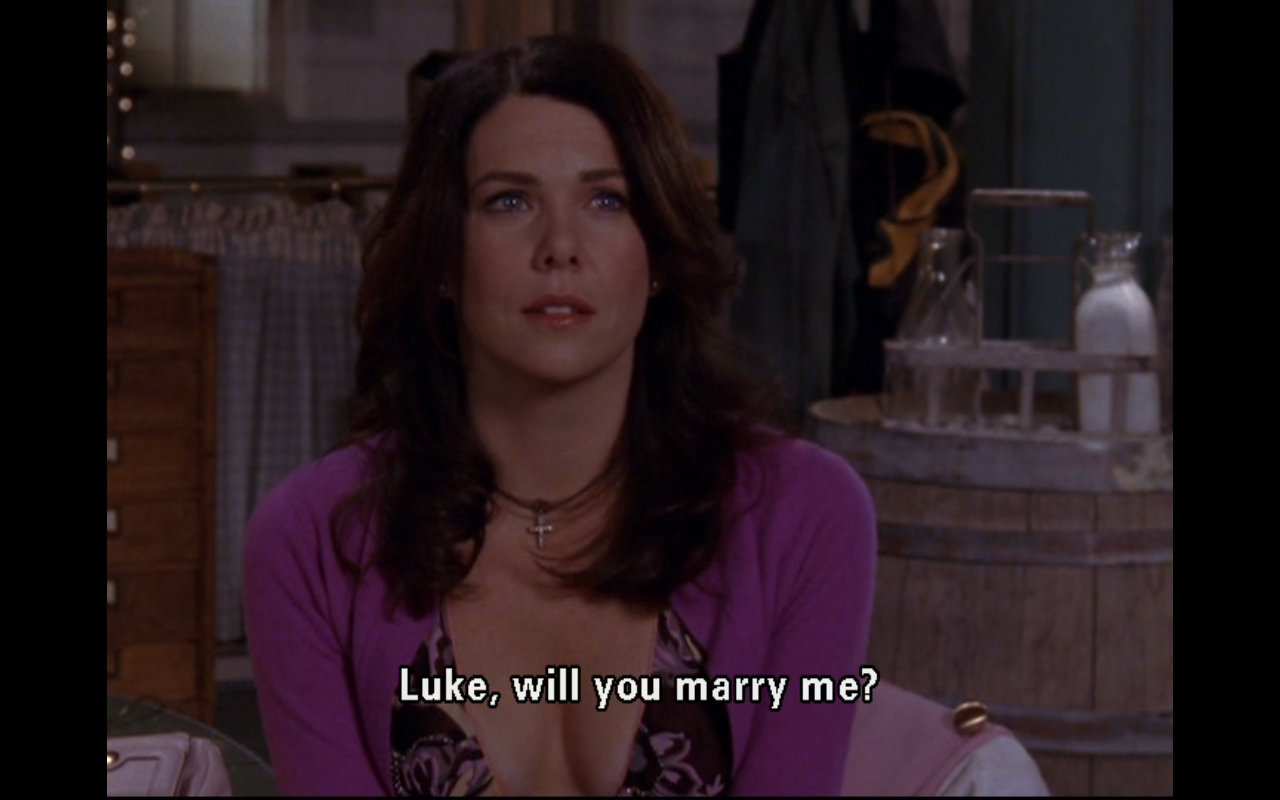 She wasn’t great at romantic relationships either. Lorelai kept men out of her life for so long, only dating casually and far away from Rory, that it was hard for her to let them in when the time did come, and when she did finally end up in a relationship worth fighting for, with Luke, her fears about losing him ate away at her outspoken nature until she barely seemed like herself.

But at her best, Lorelai was always someone worth admiring. She was a protective mother, careful with Rory’s shy nature but always gently nudging her to open up to the world a little. She was a generous friend, agreeing to atrocious double dates for Sookie’s benefit and participating in every town event with enthusiasm. The quiet moments of grace that she did find with her parents were often moving, and the progress she made with them over the course of the series became less of a struggle as time went on. 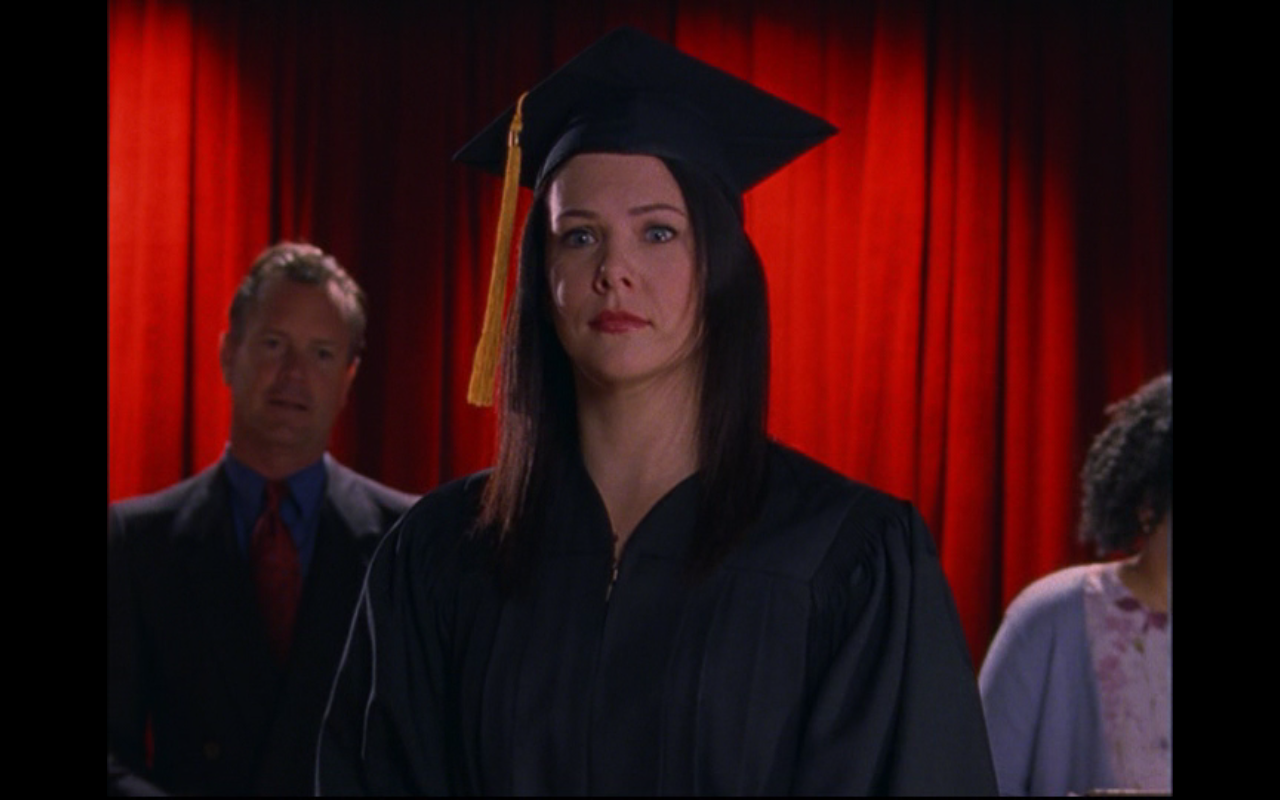 It was Lorelai’s strengths that made me root for her, her dazzle that I idolized. That was what brought me to tears when she finally graduated from business school at the end of season 2, and what I cheered for when she opened her own successful inn. That’s why I still look to her for wisdom 6 years after the show went off the air.

I’m 25 now and unlikely to be mistaken for Lorelai Gilmore, and not just because she’s got about 6 inches on me.

I live in a big city. I work a 9-to-5-or-6:30-or-9:15 office job during the day and at night I try to figure out how I’m ever going to make money writing. The only person I’m responsible for is myself. I have really good relationships with my parents and my sister. I can cook (kind of.) I have a couple of close friends, but I’ve never figured out how to shore up a community. I’m not much better at talking to boys than I was at 16. I’ve never had a rebellious nature and I still don’t.

But that doesn’t mean I didn’t learn things from her.

When I lack confidence, or I feel a little scared, it’s Lorelai’s voice that builds me up. It’s her spirit that I try to channel, that cajoling flirtation, when I have to make a difficult phone call at work, or stand up for myself. 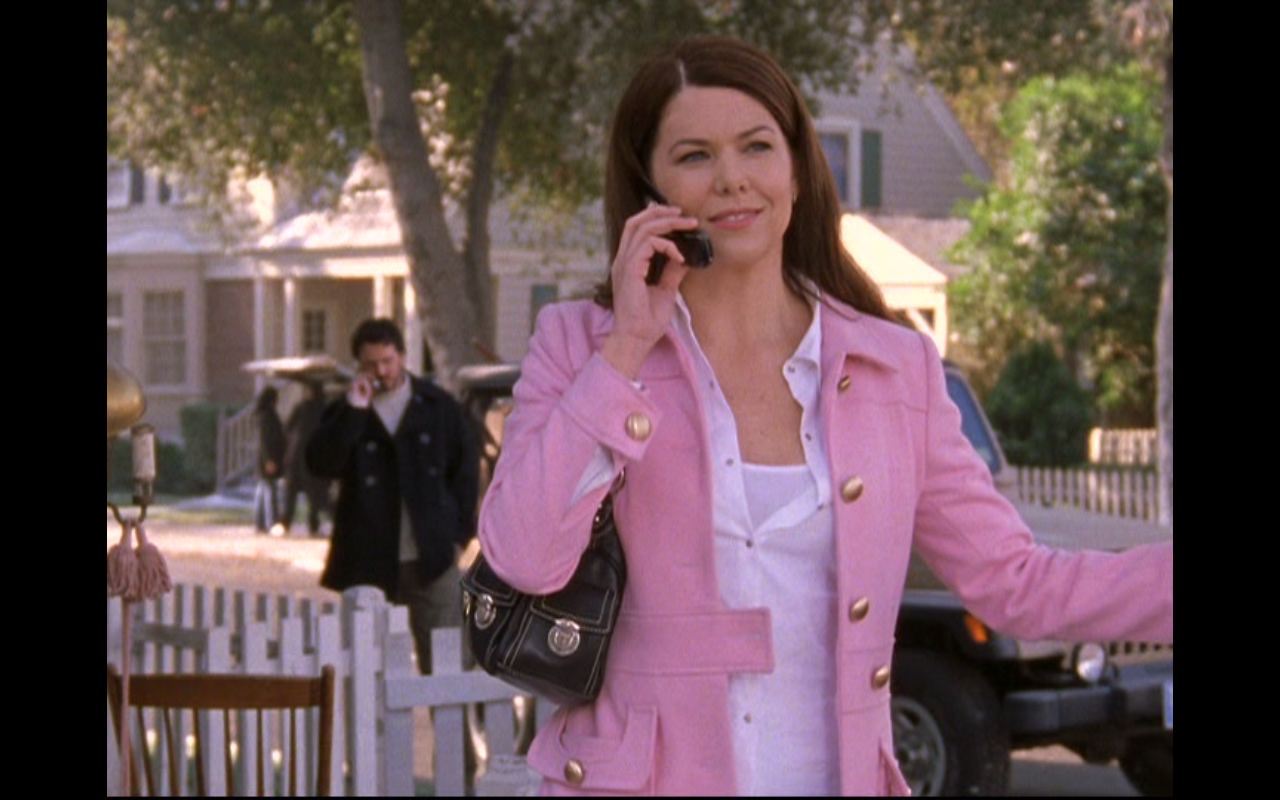 I’ve always been a big reader and watcher and listener, but without Gilmore Girls’ influence I don’t know that I would have taken in as much as I did in high school and college. The Gilmores introduced me to The Bangles, Dorothy Parker, the films of John Hughes and about a million additional artists and writers and movies, either directly or indirectly. These days, as I try to figure out how to turn that cultural consumption into something more, I can thank them for helping to develop my tastes.

More than anything, though, Lorelai Gilmore taught me that I couldn’t be Lorelai Gilmore, that I shouldn’t want to. At the end of the day, I have to make my own path and be my own person, just like she did. That I have to go where my life takes me.

In one of the last scenes of the series, as Lorelai is about to send Rory off into the great big adult world, she starts rattling off every remaining piece of life advice she can think of, some of it small (always carry ziplock bags) and some of it big (shorts are unprofessional), but Rory cuts her off.

“Mom… You’ve given me everything I need.”

Me too, Lorelai. Me too. 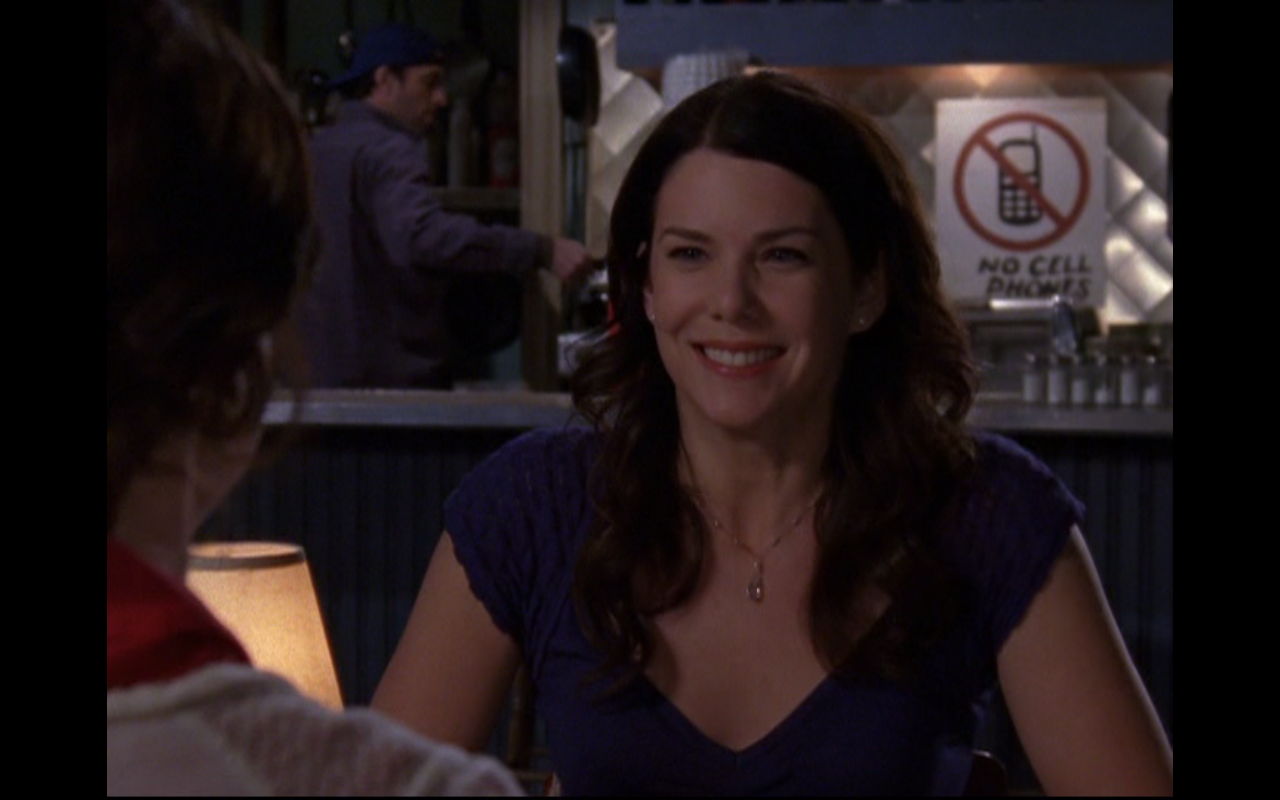 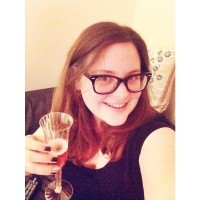 Elizabeth Wendorf lives and blogs in New York City. She can generally be found shouting TV-related hyperbole on Twitter.