Growing Up Interfaith: Any Excuse For a Party

My mother has two life mottos:

These two serve her pretty well, and our family has adopted them for basically any situation.

People tend to look at me funny when I tell them that the latter was the main theory behind my religious upbringing.

My mother was raised half-Catholic, half-Jewish. She was confirmed in the Church and has a rosary her favorite priest gave her. But she also went to synagogue with her father, used to read Hebrew, and uses Yiddish in the way a lot of New Yorkers do. Her mother’s family nearly disowned my grandmother for marrying a Jew; my mother’s mother wept because my father had waist-length braids. (It turns out Grandma’s family was actually Jewish as well, but that’s a story for another time.)

My dad was raised pure Catholic, went to school with nuns and the Marianist brothers, his Spanish-Cuban and Irish sides mingling comfortably in the church if nowhere else.

I’ve never asked my parents if they had a particular plan for our religious upbringing. It was obviously important to my mom that we retain a link to our Jewish heritage–to the family that fled the pogroms and the people that were lost in the camps–but as far as I know they never worked out a formal agreement.

In fact, our religious upbringing was extremely haphazard. We were baptized for our grandmothers’ sakes, but that was pretty much the end of it. I never went to CCD or Hebrew school. I never took my First Communion or got confirmed; I never had a bat mitzvah, either. We were told that we were both Catholic and Jewish, and that both were equally important, but not what that really meant.

To me, as a kid, the major tenets of these religions were the holidays. Not the Ten Commandments or the Nicene Creed, but the festal days. My parents never talked about God. My dad is, as far as I can tell, a total atheist. My mom blends elements of both with all sorts of other superstitions, the Hail Mary and praying to St. Anthony just as important as knocking on wood and warding off the evil eye. She says she believes in cosmic debris rather than a bearded old man on a celestial throne.

So my religious upbringing came a few times a year, a few days at a time, with pageantry and presents. Christmas meant going to the children’s mass at St. Brigid’s, crammed in an overstuffed church full of wriggling kids too excited about Santa and reindeer to pay much attention to the miracle of the Christ child and the virgin birth. Easter meant a mass with baby animals, petting bunnies and lambs and once a baby llama out on the lawn in front of the church, the miracle of the resurrection obscured by the excitement of chocolate eggs and a new dress.

Chanukah meant latkes and playing dreidel with the children of Mom’s best friend from childhood, gambling for pennies and discussing whether a Chanukah bush was an adequate substitute for a Christmas tree. Passover meant a seder with two other families, kids my age and older half-siblings and Uncle Hy and Great-Aunt Ruth coming up to visit from the city, half a dozen of us running around to try and find the afikomen and singing songs about the Four Children to the tune of “Darling Clementine”.

Any excuse for a party.

Most of what I actually know about religion has been cobbled together from popular culture, from Jesus Christ Superstar and the Prince of Egypt and the bit in History of the World, Part I where Mel Brooks as Moses drops one of the tablets of the “Fifteen – Ten Commandments!” I didn’t learn what transubstantiation was until high school, when I was taking AP European History and we got to the Protestant reformation. I read the Anne of Green Gables series never understanding what a Presbyterian or a Methodist was. I had no idea the Narnia books were a Christian allegory until an embarrassingly advanced age. But I never got past Prince Caspian, either.

I tried, as I got older, to get to grips with what this all meant. I attended Sunday services at a friend’s church to sing for Advent and Lent and Easter, and listened to the stories and tried to figure out how to believe in this all. I attended services for the High Holidays for the first time in college. The first year, I found some of my friends and sat down in their row, and they gawked at me. “We didn’t know you were Jewish,” they said. I didn’t really know if I was either. I visited churches and synagogues when I went for my trip abroad, searching for something.

While I found many interesting things, many beautiful things in these services, I never felt anything beyond that. There was a connection to my family and the roots of the family tree stretching back through the centuries. There was appreciation for the beauty of the music, the art, the architecture. But nothing more. I wonder sometimes: if I’d been raised in a faith, in either faith, in both with more time given, would I feel something? Would I hear that voice within myself, a voice from something greater than myself?

Maybe. For now, though, I’m content to keep celebrating the holidays in my own way. To get really excited for Thanksgivukkah, to see my Spanish relatives at Easter and come home for the big seder whenever I can manage the time off. To have Christmas parties with my friends and eat all the Reese’s peanut butter eggs I can manage.

And I’m going to make my mother a sampler that says “any excuse for a party”. 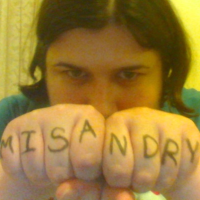 Naomi Vega is a lapsed academic and full-time nerd living in Boston. She collects octopus jewelry and spends too much time talking about superheroines on Tumblr.