Gal Science: On the Honeybee and Her Friends and Relations

As The Toast searches for its one true Gal Scientist, we will be running a ton of wonderful one-off pieces by female scientists of all shapes and sizes and fields and education levels, which we are sure you will enjoy. They’ll live here, so you can always find them. Most recently: Let’s All Panic About Antibiotic Resistance!

Honeybees have the best PR. Starting in kindergarten we learn to have a warm feeling about them, even though most bugs creep people out. But honeybees are kind of cute and fuzzy, they’ll sacrifice themselves to protect their family, they’re a metaphor for diligent hard work, they hang around with pretty flowers, they provide us with sweets. So aside from that little problem with the stinging, what’s not to like?

And they’re even more in news now, with the concern over the mysterious Colony Collapse Disorder. Starting in 2006, North American beekeepers started to report that large numbers of the adult bees in their colonies were basically disappearing. Since then, most years the average losses have been about 33 percent, enough to threaten many of our food crops, which depend on commercially managed honeybee colonies for pollination. Scientists have considered everything short of alien abduction as a cause – disease, parasites, pollution, pesticides, environmental changes – but they’re still not sure exactly what’s happening.

So the adorable and endangered honeybee is practically the giant panda of the insect world – except with the difference that pandas don’t put food on our tables. What no one talks about, though, is that these furry invertebrates have a secret: They’re basically an invasive foreign species. Our honeybees – like most Americans – are descended from immigrants, the hives full of bees brought to North America by European settlers.

But if bees are needed to pollinate plants, and honeybees are newcomers, how were plants reproducing before the Europeans got here? They weren’t just waiting by the phone for centuries for a date.

“Prior to colonization, a mere five or six hundred years ago, the natural world was working just fine here in North America,” says Michael Raupp, professor of entomology at the University of Maryland and Bug of the Week blogger. “So the question is who was hauling the freight, and the answer is the native pollinators, many of which are solitary bees.”

While the sociable honeybee – like other extroverts – hogs the limelight, there are around 4,000 native species of bees in North America, and the majority live the single life. Although they don’t build communal hives, some do their own kind of architecture, and a few are even named for their trade skills. The plasterer bee coats its burrow with a thin layer of translucent “plaster” that it produces. Carpenter bees use their jaws to dig tunnels into soft wood. And the mason bee builds partitions out of mud in her nesting chamber. Others have simpler tastes and simply nest in holes they dig in the ground.

These solitary bees don’t produce honey, but most do provide food for their offspring. (That’s what honey is actually for – when we take it, we’re basically stealing candy from babies.) The female mason bee gathers pollen and makes it into a cake, lays an egg on it, and seals it into a chamber with mud, and the yellow-faced bee makes “bee-bread” from a combination of nectar and pollen. A few are less diligent parents: The cuckoo bee – named after a bird with the same sneaky childrearing approach – lays its eggs in the nests of other bees. Its larvae eat the food intended for the victim’s offspring, and sometimes eats the nestmates as well.

There’s also a native bee that everyone is familiar with: the bumblebee. The bumblebee is social, but its family life sounds so tragic that it might be better off alone. Bumblebees build nests in existing cavities like abandoned rodent burrows, where, like honeybees, they live in colonies with a queen and workers and make honey. You can’t buy bumblebee honey, though, because they don’t produce the huge stores that honeybees do.  Honeybees produce so much because they need it to get through the winter, when there’s no pollen and nectar to gather. Bumblebees have a different strategy: everyone dies off at the first frost, except the newly-hatched queens who will start new colonies in the spring.

So if we’ve got thousands of species of native bees, why did European settlers bring their own? It’s because most of the crops we depend on have that same secret in their family history. Maybe the saying “as American as apple pie” actually makes more sense when you realize that apples aren’t native to North America either. The reason Johnny Appleseed had to spread all those seeds, after all, was exactly because we didn’t have any apples here before he did it. Those iconic Southern peaches originally came from elsewhere too, along with pears and cherries and cucumbers and many other foods it’s hard to think of as exotic.

And exotic crops called for exotic bees, because pollinators are often adapted very specifically to specific plants. A classic example is an orchid with a foot-long nectar tube that Charles Darwin discovered in Madagascar.

“Darwin said that there must be an insect with a very long tongue that this thing is trying to attract as a pollinator,” says Raupp. “Some forty years later another scientist discovered a hawk moth in Madagascar with a thirteen-inch tongue that was the pollinator.”

This kind of specialization means that despite its central role in agriculture, there are a lot of things the honeybee isn’t very good at. Native bees are still much better at pollinating the native plants that they’ve coexisted with all along, like pumpkins, cranberries, and blueberries.  And honeybees don’t pollinate tomatoes at all, because they can’t get at the pollen in their flowers. But native bees (including solitary bees and the more social bumblebee) know the trick: the flowers need to be vibrated at a certain frequency to release the pollen. Tomatoes are also pollinated by the wind, but when the bees help, the plants set more and bigger fruit. There are also beloved flowers that depend on native bees: azaleas also need their flowers shaken to release the pollen, something honeybees don’t know how to do.

So before you jump on the urban beekeeper bandwagon and get yourself a hive full of those foreign producers of sugary syrup, consider this: you could be the real locavore in the neighborhood, and raise native bees instead. For example, you can attract mason bees to nest in holes drilled in a wooden block, or build them nests made of reeds or thin cardboard tubes or straws.

And if you’re not convinced, here’s one more point in their favor: they don’t sting. Who’s the sweeter bee now? 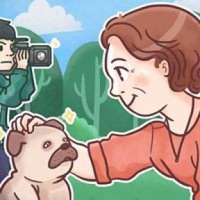 Linda Lombardi is a writer, unemployed zookeeper, and recovering academic. She is the author of the book and blog Animals Behaving Badly and you can follow her on Twitter.