In a galaxy far, far away from here, there is a planet populated by a sentient race of beings not unlike our own in many of the ways that matter. The name of this planet isn’t important, nor is the name of the race.

What is important to know about these beings is that long ago, they developed a very particular technology. This technology lets them scan the universe for sentient thought and beam it back to their planet. The science is confusing and frankly impossible to really comprehend using human reasoning, but one of the hiccups is that across the vast expanse of space, much of the signal is lost. There are a few things that can amplify a thought’s signal, though, allowing it to come in loud and clear: rhythm, alternating tones, and emotional intensity.

The upshot is that their technology can only pick up on the little songs we make up and sing to ourselves in our heads. Whenever a beat builds in your mind and you start layering vocals, they’re listening. Your morning shower croon about your ex-girlfriend and her inadequate new lover, your singsong jam about scrambling eggs, your soulful ode proclaiming who is the best doggy in the whole world, they’re listening.

What’s more, the human-equivalents of disc jockeys among these beings have realized the marketing potential of your song-thoughts, and they broadcast them over their radios. Their population is large enough and their tastes divergent enough that every single person on Earth has fans on this faraway planet.

Naturally, some earthlings’ song-thoughts are more popular than others, but the truth is that you are a celebrity. Your songs are famous, beloved and well-known. These other beings don’t sing, not exactly, but they emit sound along with your thoughts and bop their heads—they do have heads—and generally get down and groove to your mind’s greatest hits. You never thought anyone was listening, but they were, they are, and they can’t get enough.

Whole radio stations are devoted to your imagined melodies and billions tune in daily. You have a fan club. Several, actually. Your biggest hit, you may be surprised to know, is something you hummed to yourself in eighth grade, science class, October, one of your first big heartbreaks. Remember? No matter, it’s certified platinum over there. Well, human-equivalent anyway.

Granted, they don’t often grasp the semantic meaning of these songs. Human language has been a tough nut to crack for them, because really, why bother? Your latest ditty about sitting in traffic and being unbearably hungry has cracked the Top 40 and right now, right this instant, the youth on that planet are dancing in clubs to it, emitting along with it, reproducing to it. The meaning isn’t important to them; it’s catchy and it has a good beat.

You have a collection of holiday songs (although you’d be surprised to learn what they consider festive). You have your own section in their karaoke books.

I have some bad news, though. Now that you know all this, you’re going to be more self-conscious about the songs you sing to yourself. You’re going to overthink it. You’re going to start considering whether your rhythms are complex and original enough, editing your lyrical thoughts, trying to please those crowds far, far away.

It won’t work. Whereas once their critics praised the plaintiveness of your thought-song, “I’m Putting on My Pants, One Leg, Two Legs, Next Comes the Shirt,” now they will complain that your new stuff sounds overproduced. Your albums’ sales will drop. The requests will stop pouring in. Soon, your hits will be confined mostly to the oldies station. The thoughts that the youth will be dancing and emitting along to, you would describe as total ruckus, if you could hear them.

But hey, you had a good run! And who knows, in a few years, maybe you will have a comeback tour, when your memory of this has faded, when a few more heartbreaks have refreshed your sound, when your mind wanders while waiting in the burrito line and you begin making up lyrics to the honking, bustling thrum of city life without.

They’ll emit, “She’s back! It’s a return to form!” and with any luck, they’ll pack the stadiums and nod politely to your latest efforts. But they’ll thunder and boom when the disc jockey slips in their old favorites. That’s all they really want to hear, you know. They came to hear your old stuff. 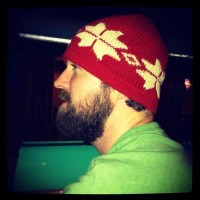 Michael Price is a science writer in San Diego. Coffee is his one true love.