I throw salt, knock wood, stay away from black cats. I won’t open umbrellas in the house, walk beneath ladders, or touch toads. Decades after leaving elementary school, I continue to hear “step on a crack / break your mother’s back” on certain sidewalks. I spend rent money at wishing wells. I probably don’t need to tell you how careful I am around mirrors. Born at 13:13 (or 1:13 pm), I was destined to be superstitious.

Over the years, I’ve added my own special superstitions to this not-entirely-uncommon pantheon. For example, I travel with 36 cents—precisely one quarter, one dime, and one penny—in each and every piece of luggage. I did it once years ago, the trip went well, and, voilà, my version of a baseball player who wears the same socks for every game, only far less smelly. Walking down the street with someone, I won’t let anything like a pole or another person come between us. Doing so opens a space into which bigger things might enter, thereby eroding the relationship. Given all the pole- , crack- , and cat-avoiding, it often takes me twice as long as most people to get anywhere.

Recently, my superstitions have mushroomed. At 38, I’m pregnant with my first child, a planned child, a wanted child, and one whose very presence in my lower half scares the bejesus out of me. Suddenly every interaction has become an opportunity for prognosticating: If I make it to the crosswalk before the light changes, the baby’s nuchal translucency screening will be fine. If this woman smiles at that man, the FISH test will show the correct number of chromosomes. If I get that email before the end of the day / if I see a French bulldog / if they have pomegranate juice at the deli, our kid will be normal, above average, or perfect, whatever the test results or doctors require. What it will be, and has been, is exhausting.

While it’s true that pregnancy tends to shrink a woman’s brain, physical symptoms alone aren’t enough to explain my uptick in phobias. As I entered my second trimester and my risk of miscarriage diminished, I found new things to obsess about. To some extent, my superstitions helped ease my anxieties. Although I can’t change what was printed in the genetic code when my son was conceived, I can bring us a little luck—or try to.

Never before in human history, or at least in New York City, where I live, has pregnancy been so medicalized. My first genetic screen, a routine test given to women of a certain age, looked at 85 possible abnormalities. A genetic counselor called to suggest a test that would assess an additional 250. “They’re all quite rare,” she said. “But some people like to know.” My husband, Garrett, and I were not those people. Nonetheless the mind wonders (and wanders, especially at night, down roads pockmarked with phrases like chromosome peculiarities, neural tube defects, and congenital disorders).

Every doctor’s appointment offered further opportunity for worry: Garrett and I are told that we may have a 1 in 10,000 chance of having a child with galactosemia, an inability to process a fundamental sugar. Later we’re told that we may have a 1 in 5,000 chance of carrying a baby with an ambiguous disorder relating to sex differentiation. To better determine those odds, we go in for an amniocentesis, a procedure that itself carries a 1 in 400 chance of miscarriage. As it turns out, our baby does not have galactosemia, and his genitals are developing normally. We all survive the amnio. Still, each time a danger is ruled out, another pops up in its place.

Someone has to be that one, I think, as I spy a rainbow. Don’t let it be us, I think, as I rub a rabbit’s foot. But it’s more than wishing for a healthy baby. As our son grows, I wish that he will become as funny and sensitive and thoughtful as his dad. I wish that he has a happy, passion-filled life, with great friends and fulfilling work. I wish that the closet we’re planning on transforming into the baby’s room doesn’t somehow scar him for life. In short, I wish to control everything I can’t. And in doing so I lose sight of what I can control.   I come from a superstitious family. No one I’m related to says “goodbye,” only “be good” or “see you.” My dad does what he calls “first flight,” in which he makes wishes on flocks of birds as they take off. A new bag or wallet meant my grandfather would give me a dollar to keep, so that I would (theoretically) always have money. Whenever I moved apartments, I’d receive a packet of sugar to put in the cupboard from my grandmother, so that there would always be food in the house. My peripatetic twenties yielded enough sweet stuff to just about ensure adult-onset diabetes. Of course, I wasn’t supposed to be eating it. It was the symbolism behind the gesture that mattered.  To the superstitious sort, every symbolic gesture shores up life against unpredictability. When I got married, I wore something old (a black cardigan), something new (fishnet stockings), something borrowed (my fiancé’s deodorant), and something blue (a beaded bracelet from my stepmother). Why take the risk? And yet can I reasonably say that my marriage works because I cloaked myself in Garrett’s scent? Take tradition out of the equation, and most superstitious behaviors start to sound slightly crazy.

A few weeks ago, I went to a friend’s apartment for dinner. As I hung up my coat, I saw a hat on the bed, about as bad luck-bestowing as you can get. Rubbing my burgeoning belly, I almost turned around and left. I knew it was wrong. My magical thinking had become the mental equivalent of candy, easy to swallow, placating, utterly lacking in nutrition. The time had come to do real cognitive work, the mental equivalent of juicing and quinoa. Plus, I was really hungry.

In my neighborhood rests a stone lion whose head I touch for luck as I walk by. Well, so sometimes I cross the street to touch it. No surprises there, though instead of making a wish on the cold concrete, I’ve started muttering a little mantra. I’m putting aside the “if-then” conditional of superstition, in favor of embracing the nowness of gratitude. Thank you, I murmur, and try to enumerate everything I have to be grateful for at that moment. Meanwhile, I go to my prenatal yoga class, I take my mama-to-be vitamin, I say no to unnecessary tests at the obstetrician. Most of all, I consider the kind of parent I’d like to be.  No doubt I’ve already saddled my son with neuroses, with more to come once he arrives in the world. However, I refuse to give him this one. I never want any kid of mine to be so busy looking down that he forgets to look around, so busy obsessing that he forgets to simply be. Go ahead, sweetheart, I intend to say someday. Live with abandon. My back can take it. 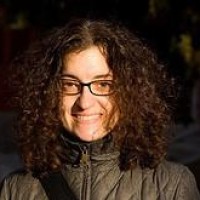 Jessica Allen is a writer living in New York City.