Rosa Lyster is Nicole’s favourite Toast poet, and here is her previous work for us.

The author notes that these are student answers to exam questions on Zadie Smith’s On Beauty, and Camus’ The Plague.

He speaks to the son of his enemy,

Even though he is fully conscious of its futility.

He is a 57 year old white American,

He is a fanatic poetry lover,

He is a school dropout who actively thinks he is a gangster,

He is aware of the tensions that arise when certain things are intermingled,

He is love with a girl called Victoria,

His name is Jeremy.

He speaks to the son of his enemy,

About the rates, the plague, and the telegrams,

About the eleven official languages decorating the South African flag,

About the metaphysical problem that is life,

(although this is not as bad as it was years ago, it still happens)

About the Robin Hood-like Haitian fugitives,

And the difficulties of entrapment, death, and so forth.

If we analyze the text with a microscope,

We will see that during the phone call to the house of his enemy,

Jeremy realizes he has made a terrible mistake.

If we analyze the text with a macroscope,

We will see that during the phone call to the house of his enemy,

He realizes that the sequence of life is meaningless and that

The only choice is death or death –

This needn’t be a problem.

He has a falling out with Mike, Victoria’s sister,

About a group of suburban children at the record store,

And other negro-related aspects of the text.

It seems that something has been lost in translation,

But I can confidently assert that

The rats indicate Algerians during the occupation of France,

The rats represent the Jews,

The rats cannot communicate with humans and therefore

The rats represent the Nazi occupation of French Algeria,

Everything ends where it began, and vice versa.

And they know that to define something is to do the opposite of what is meant,

There is a fancy French term for this effect – it escapes me,

But perhaps in France formality of speech is not an issue,

Careful analysis is the only antidote to this confusion-

The first ghost is a policeman

Downcast, she is far down at heart,

And she has this new young crowd of ghosts,

Just standing around her and tapping the walls,

Full of epic lust and jabbering with anxiety.

One ghost is the acknowledged bastard

He plays the recorder under her floorboards,

And makes the sound of a sleeping bag unzipping,

He has sworn to accompany her

All night and all day and

All of the minutes there are.

There is no point in having a forest

If you are too scared to go in it,

So she takes the ghosts with her,

One ghost was a goddess – the loveliest thing,

The fish when they saw her forgot about swimming,

The giraffes bent their necks to the ground,

The trees dropped their fruit and the birds cried hot tears,

Her name when she had one was Iris.

One ghost wishes she could live without girls

For a little while and just be happy,

Alone in her part of the house,

There is a ghost that is only a smell

Of gin and cocaine and the blooming tobacco flowers

That she assumes the ghosts like to look at,

A breeze down the back of her jacket,

A cold little hand’s swipe at her neck.

One is the lord of a warring state,

But no ghost around here will fight  him,

He runs his sword against the railings,

Waves it above his ghostly head and hopes

That it will provoke a challenge, but

The ghosts round here are bored of dying.

Only one she knows is bad for sure,

He will tear them both to pieces completely,

If she would just let him,

He says she will wait til she cries herself blind,

Til she cries her eyes right out of her head,

And then he will sit on the end of her bed,

And talk to her quietly about her mistakes.

She stands on the bank,

And watches the ghosts all in a line

Getting their ghost knees wet as they cross the river,

The trees of the forest are all dark behind her,

The Zoo in the War

Out of all of the animals

That are left in the zoo

Just the dull ones remain.

Who knows how they got in a zoo

And deers with long teeth and short tempers.

Not the kind you’d pay to see:

All slippery and waiting  to climb your arm.

Mid-sized birds with no girlfriends

And no one to show off to,

Some hens, a mouse, two bees.

And now here they all are,

No keepers, no food, no chance they will figure this out

The beautiful ones were stolen

On day one, bundled into baskets

And put on the train to Paris.

They’re the toast of the city, they’ll be a book,

To tell us how to feel about the war,

We don’t know whose side they’re on, but no matter.

The beautiful ones will not reveal

How many got left behind,

The social lions won’t say, but they know.

The smart and the dumb and the nutters,

All watched as the lovelies were carried away,

And some of them saw what to do.

The smart ones pulled out their manuals

On how to escape,

Step two: you don’t have a choice here at all.

Step three: we are all on your side.

Step four: how are you coming along with that hole.

The thick ones are not so quick

To say that the hour has come to leave

They will wait and see if their breakfast comes back.

Motheaten, they will defy you

To ask what business they have here-

A zoo is no place for a hen, two bees.

The smart ones are out,

The hole has been dug, it was easy

Step five just says: I told you so.

To tell you the plight of the crazies is simple,

Mostly: tangled in the wire,

Sometimes: hit by a truck.

The dumb ones were not sorry to see them go,

Whispers that this is the end.

They know that help is coming and breakfast

Will soon be upon them –

The slow ones know that panic is the enemy

So stay calm, breathe low, and be ready to wait. 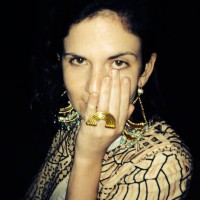 Rosa Frances Lyster is a writer who lives in Cape Town. She tries her best to stay home all day and write poems about Sun Ra and Ray Smuckles.