My first week in America, I poured half a bottle of hot sauce into my food.

“Wow,” said my dining companion, a girl from Connecticut who rode on the equestrian team. “I can tell you’re not from here.”

“No, but you just put so much of it into your food – I like my food much more delicately seasoned than that. That’s why I can’t handle curry. It’s just too much, it upsets my stomach.” She shuddered, as if reliving a bad dream.

I put the bottle down on the table, and stared down at my plate, covered in tell-tale red. I don’t tell her that curry is a Western construct, one that you wouldn’t find on any Indian menu. Instead, I feel ashamed, as though I’ve been caught with my hand in a cookie jar at midnight.

From now on, I vow, I will be much more discreet.

I grew up on spices.

In middle school, a boy teases me for being named after a famous Indian brand of pickle. Pickle in India connotes a mix of vegetables and fruits preserved in brine, bottled for convenience, served at every meal. He asks me if I like Priya Pickles. I laugh and tell him that yes, I love Priya‘s hot lime pickle. He blushes, unable to think of a comeback.

Every Indian kitchen has an extensive pantry of spices; a silver dabba, or container, holds the most commonly used spices. I’ve never been good at cooking, but I’ve been in the kitchen enough, peeked over my mother’s shoulder enough to know what each spice tastes like. There’s cinnamon, clove, coriander seeds, different types of cardamom that are each as fragrant as flowers. Fenugreek, fennel, nutmeg. Asafoetida so pungent that more than a sprinkle will ruin your dinner. Crushed chilli powder that is red as sindoor, the powder that new brides rub into their hairline. These are always dusted into the rice that my mother serves, always on the table as an accompaniment to whatever we eat. My favourite is the cumin seed, that I learn how to roast and mix into the iced yogurt drink we make every summer.

I don’t have much of a sweet tooth, though Indian sweets deserve their own hall of fame. For dessert, like, my father, I eat tender green mangoes with salt and chilli powder. The taste is mouth-puckeringly sour. Between the two of us, we polish off every mango in the freezer without so much as a stomach-ache to show for it. My mother sighs when I drown my food in spices to make it extra hot, a trick I picked up from him.

I’ve only ever lived in places where I could find my beloved spices: London and Delhi and the Middle East. Wherever I went, I found Indian grocery stores that stocked jars and jars of spices or dried whole chillies that I could take home and crush into my food. In London, I eat at little Indian restaurants when I’m homesick. In Delhi, I bite into the corn which the street vendors rub with their own concoction of rock salt and potent spices. In Muscat, I eat falafel and kebabs and hummus spicier than anything you’d find in a store.

In India, a man catcalls me on the street. He says: “You’re a real masala girl.” He means I’m hot, but I like to think of it as spicy.

In America, I go to college in a tiny town, and for the first time there is no Indian grocery store that I can raid to get my fix. I make do with the poorest of substitutes: a bottle of generically-labelled “Curry Powder”; extra jalapeño peppers on my pizza; bottles of Frank’s Red Hot.

When I order Chinese food with my friends, I get the hottest thing on the menu. It’s still not hot enough for me. But when my friends taste it, their eyes water, and they yell at me for not warning them.

“Really?” I say, spooning more into my mouth. “It doesn’t taste spicy at all.”

“You should try the ghost pepper,” they say, “the hottest spice in the world.”

“Crazy girl,” they say, shaking their heads at me. “Crazy.”

Curry-eating Indians, they say. They hate Indian food, how the smell gets into everything. White people tell me they’ve been to India and lost, like, twenty pounds because they got diarrhoea.

I laugh awkwardly. I don’t eat Indian food in front of them. I leave the bottle of hot sauce unopened, and learn to eat meals that don’t taste like anything. The only seasoning I use is a dash of salt.

I think to myself, White people conquered our country for spices that they don’t use. I am amused by the irony of it.

As I grow older, I meet different kinds of people. Not all of them are on the equestrian team.

I date a white boy, who takes me to dinner and asks whether I want to eat Indian food.

I raise my eyebrows at him.

I am skeptical. At dinner, I ask the waiter for food as spicy as possible. He is delighted to meet another Indian in our little town.

Listen, sir, I’d like it very hot. Know what I mean? Thanks.

My date scrunches up his face a little when he tastes the chicken. The waiter has, indeed, been generous with the spices. I bite my lip.

Manfully, he chokes it down. His cheeks are a vivid shade of red, and he drinks his glass of water in one go and asks for another. I burst out laughing, and he joins me.

Little by little, I reclaim my love of spicy food.

I grow feisty as the spices, rebellious as the taste of pepper on your tongue. Whenever I come across someone who doesn’t like Indian food, I tell them it’s their stomach that’s weak, not my taste buds that are too strong. I tell people that Indian food is no less crude than European cuisine merely because it’s more flavorful.

I eat food in combinations that only a pregnant woman would think of. I order Bloody Marys and dirty martinis when I go out, because I like my drinks to be as delicious as my food. I make friends with people who love the same kind of food I do, the kind of people who rush out and buy sriracha when they hear there might be a shortage.

I move to a big city, where I can have Indian food whenever I crave it, which isn’t often anymore. Usually, I’m happy with a bottle of Frank’s Red Hot. I keep bottles of it in my kitchen in plain sight, unashamed. 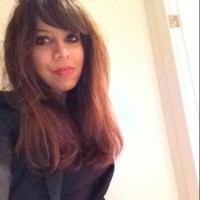 Priya Alika Elias is a lawyer who lives in Boston. She enjoys B-movies, looking at pictures of pugs, and tweeting @thewordy.