Popular A Song of Ice And Fire Fan Theories

1. Daenerys will be introduced to no fewer than twenty new characters, each more critical to the plot than the last. Aggravated over the complicated new names and the glacial pace of her storyline, Daenerys will fly off on Drogon across the narrow sea and burn everyone in Westeros alive. Dany will then sit atop a throne of charred skulls, eating raw meat, giving the finger to the Lord of Light.

2. Sansa will destroy Littlefinger’s reputation and leave him penniless and alone. She will then retake Winterfell and will sit as the Wolf in the North. She will redeem her entire family and shame all those who stood against the Starks. She will rebuild.  She will do this without ever personally wielding a sword, but through diplomacy, intelligence, and grace. People will continue to log onto Tumblr to talk about how much they hate her, how she is super lame, whiny, and is totally “not a strong female character.”

3. Jon Snow will discover through a series of dramatic revelations that he is his own mother.

4. Osha and Rickon will travel to the island Skagos where they will be introduced to no fewer than 20 new characters, each more critical to the plot than the last. They will continue to be irrelevant themselves.

5. Jon Snow, Young Griff, and Daenerys will come together to form a giant Azor Ahai, Power Rangers style, with an elaborate transformation sequence. Dany will be the head and arms, Young Griff the torso and legs, and Jon the useless breastplate.

7. Even Hodor will become unnerved on his quest with Bran. After a few months he will throw his hands up and stand, saying, “OK, screw this, screw the trees, screw the ravens, screw you guys, this sucks. I didn’t even want to come out here in the first place, but you guys had to be all ‘ooh Hodor, carry me Hodor.’ ‘Help me Hodor!’ ‘Hodor Hodor Hodor!’ Can you even say anything else?! Well. Screw that. I’m out. Hodor.”

8. Victarion Greyjoy is Azor Ahai reborn. He will have almost taken Volantis when a child points out his “weird lookin’ arm.” Weeping, he will retreat to the sea and lock himself in his cabin for days. His crew will tire of listening to the Cure and abandon him. The Lord of Light will look the other direction, shielding his face so no one can see him.

10. Everyone in Dorne will slowly back away from the unfolding shit up north, all “Wow, OK guys, good luck with that.”

11. Tyrion will make some jokes that will go over his companion’s heads.

12. Podrick Payne is Azor Ahai reborn. Everyone in the realm just kind of looks at each other like, “What?”

13. For years, scholars will argue the merits of the schticky, 74-page “Abby Normal” homage when Cersei unveils her new champion, Robert Strong.

14. Brienne will die horribly. Jaime will feel sad for five seconds and then any lessons he’s learned will escape him immediately. He will have sex in front of her corpse.

19. Littlefinger will not die horribly.

20. Nymeria the wolf is actually Azor Ahai reborn. She will eat everyone who hasn’t already died horribly and take the Iron Throne for herself.

21. King’s Landing will become infested with wolves under Nymeria’s rule. Wolf-Littlefinger will run a wolf-brothel and Wolf-Varys will know what Wolf-Stannis had for breakfast two weeks ago (a rabbit.)

22. Ser Pounce will be spared due to his bravery and charm, and will sit next to Nymeria on a comfy blanket set in a golden sunbeam.

23. The Others will march on what is now known as Wolf’s Landing, see Nymeria and her Wolf Army, be like, “Oh shit,” and run the fuck away.

24. The final book in the series, A Dream of Spring, will not actually be published in your lifetime. 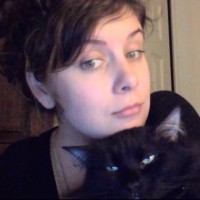 Alaina Conner writes and makes bad jokes from her home in Pittsburgh.