When I was growing up, I didn’t watch a lot of commercial TV; we were a PBS/Star Trek household. One hazily remembered day, an enchanting show came on where an excessively polite, strikingly handsome man in a splendid red suit solved crimes with his deaf, lip-reading dog, Diefenbaker, an inside joke I would not get until much later. Welcome to my life, Paul Gross!

Paul Gross is the Canadian actor. There are other actors from Canada (one or two, here and there), but Gross is the only one who has really only played Canadians – he’s always a Canadian. Sure he must have been in things where he’s assumed the mantle of another nationality or creed, but I choose to ignore it. Gross seems to embody an ideal of Canadianess in his major roles: excessive politeness and the rule of law, gentle artistic eccentricity, and REVENGE UPON THE EVIL AMERICANS!!!!

Constable Benton Frasier remains the preeminent Paul Gross experience. For anyone who was not into somewhat-cult 90s era Canadian-U.S. coproduction magical realist cop dramedies, the premise of Due South: a Mountie is assigned to the Chicago P.D. after an investigation into the untimely death of his father (also a Mountie, and noted Canadian thespian/legend Gordon Pinsent) makes him politically toxic up north.

Fraser is partnered with Ray (David Marciano), basically your standard issue 80s-90s gruff-cop-with-a-heart-of-gold, and they run around misunderstanding each other and solving crimes. DELIGHTFULLY. The whole show revolves around a clash of benign stereotypes and the Fraser-Ray relationship is U.S. (brash, cynical, prone to violence) and Canada (polite, passive-aggressive, slightly magical) in a nutshell. Due South largely works because Gross and Marciano work together. When Marciano left at the end of season two, it diminished the show, something basically acknowledged when they brought him back for the excellent series finale.

Fraser has quasi-magical powers, his ghost dad shows up to dispense sage advice, he can crack cases by tasting and smelling things, he can communicate by semaphore, his dog can read lips, it goes on! What Gross really brings to the part is a sense of sadness and weight, without which Fraser might be too perfect to like. Fraser would much rather be doing Mountie things way up in the territories, his time in Chicago is definitely a punishment he only gradually comes to enjoy. It’s notable that (SPOILERS) in the series finale he heads off to find the Franklin Expedition instead of staying in Chicago, his dream achieved. (/SPOILERS)

Gross also wrote several episodes and even contributed his songwriting/singing talents on occasion. In what would get my vote for best single episode (“All the Queen’s Horses,” from season two), a train full of Mounties sings a song about riding forever, written by Paul Gross. What. A. Guy. Said episode features a bomb on said train, Leslie Neilsen as a Mountie, Fraser getting kissed, and a mounted cavalry charge. TOO DAMN GOOD.

Due South was actually filmed in Toronto, which blows my mind a bit, since it means we have a show about a Canadian in the U.S. city which is actually filmed in a Canadian city. Some real ouroboros stuff there! As the Gordon Pinsent and Leslie Neilsen cameos foreshadow, Due South boasted cameos from about every Canadian actor who was anyone in the mid-late 90s, which makes for a great drinking game/form of bingo for Canada obsessives!

The next major role I associate with Paul Gross also features a ghost. Slings & Arrows is also a cult show, being beloved by Shakespeare and theater geeks for its many in-jokes and perceptive realism vis a vis backstage shenanigans. Gross plays Geoffrey Tennant, an actor who was committed to an asylum during a run of Hamlet some years ago. He’s been scraping by on the fringes of the theater world, when his mentor, Oliver Welles, the director of the New Burbage Festival (it’s totally this y’all) is run over by a truck filled with hams (theater humour y’all!) The upshot is that Tennant is put in charge of the New Burbage festival and his former mentor appears to him as a ghost, which no one else can see, which makes everyone else sure he’s still one socket short of a set. Tennant and Welles have history, which makes having to hang out together is fraught.

This is a show I find hard to talk about because it has so many wise and insightful things to say about being alive, being a good person, and life in general which are beyond my ability to express well. Happily this is a Paul Gross article so I can just focus on what he brings to the table (but seriously, watch this). Quite honestly it’s another straight man role; one of the grand ironies of the narrative is that he’s the sanest person in a world of bizarre and eccentric people. THEATER PEOPLE. He’s got to put on Hamlet, or the whole festival is toast.

Perhaps the single best part of Slings & Arrows is the relationship between Tennant and Ellen Fanshaw, the resident theater diva. The nuclear end to Tennant and Fanshaw’s relationship pretty much caused his mind to break and of course they’ve got to work together to make the production a success. Ellen Fanshaw is also the BEST character on Slings & Arrows, she’s massively conceited, but hugely talented, and terrified for her future as she reaches an age where she can only play Lady Macbeth, nurses, and witches on the Shakespeare circuit. Now you might say, up what does this character have to do with Paul Gross? A: Martha Burns, who plays Fanshaw, is Gross’s real life spouse! Game, set, match, topical relevance! Seriously though, it’s a great show, very Canadian (co-created by a member of Kids in the Hall! How Canadian is that?), and Paul Gross is totally credible as a former great Shakespearian actor and present day guy-just-barely-holding-it-together. The later two seasons (featuring productions of Macbeth and King Lear) are honestly even better while being the dictionary definition of ‘bittersweet.’

The final uber-Canadian role I associate with Gross is his turn as the immoral conniver Thomas McLaughlin in the CBC miniseries H2O and The Trojan Horse. These shows are Canadian House of Cards, i.e. devious political machinations played for high office. McLaughlin kills his father (a canoeing accident, the most Canadian form of assassination behind ‘the moose did it’) and sells all of Canada’s water to the U.S. to consolidate his power, causing mass protests and domestic insurrection within Canada. At the end of H2O, it’s revealed the whole plot was a pretext to allow the annexation of Canada by the U.S. (dun dun dunnnnn). In The Trojan Horse, McLaughlin runs for U.S. President, planning to win and wreck the country from the inside, FOR REVENGE.

There are numinous Scandal-like complications, backstabs, turnabouts, betrayals, and the return of Martha Burns as the Governor of Texas! The whole mess can’t quite decide if it’s trying to be sort of serious or is a delicious gooey mass of cheesy wonderfulness (the latter is obvious more entertaining). Annnnddd of course: Paul Gross, he’s really good at being a slimeball (sorry Paul! I love you!). McLaughlin is a character who is either being weak, gloating over outsmarting someone, or looking po-faced as he is outsmarted, but Gross has the raw charisma to make the viewer believe that the electorate would choose to make this utter bastard Prime Minister/President.

Paul Gross: thespian, musician, Canadian, legend. Looks amazing in red. Let us appreciate him for the national and international treasure he is.

POSTSCRIPT: Extra Paul Gross credit, he also starred in Men with Brooms, an intermittently amusing sitcom about curling. Recommended for curling die-hards and PG completists. Gunless is an intermittently amusing meta-western about an American gunslinger crossing into Canada and his resulting confusion at the orderliness and lack of guns. Major problem: Paul Gross plays an American. Please, there is suspension of disbelief but that’s just too far! 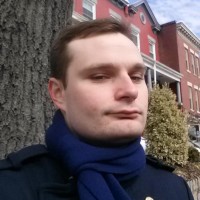 Forrest was born somewhere near Golden, Colorado and currently resides in Washington, DC.