Nicole Froio’s previous work for The Toast can be found here.

The house was little but cosy inside, if a bit cluttered. The decoration was a mixture of old-fashioned bird plates, award plaques and black and white pictures. Charlie showed me in and kindly offered me a cup of water (a blessing in the heat of Davey, South Florida) and John McNeill immediately greeted me, supporting himself with a cane in one hand and shaking my hand with the other. I had to raise my voice a little bit so that he could hear me, but otherwise the 88-year-old is still sharp and sure of his convictions.

McNeill is the first openly gay Catholic priest in the world and he brazenly defied the Church’s judgemental stance on LGBT rights by writing the book The Church and The Homosexual that argued that homosexual love was another kind of love, just as valid as heterosexual love.

“In some sense it was my experience of a deep personal love relationship that led me to question church teaching about homosexuality,” he says. “I see gay love as another form of human love and just as valid as heterosexual love and it’s a gift from God to be celebrated and not to be condemned.”

Originally from Buffalo, New York, McNeill joined the army at 17, in a program that would train him into an officer. The training scheme turned out to be a hoax and teenaged McNeill was sent to Fort Benning for combat infantry training. Soon after he was deployed to Germany during the Second World War.

“I was 17 and I was going into combat. We were the first ones to enter Germany and I was captured by the Germans. And ended up six months in a prisoner of war camp and that was pretty bad because they starved us deliberately. And [my weight] went down to between seventy and eighty pounds.”

McNeill was taken to a prisoner of war camp near the Polish border. His struggles during his imprisonment were damaging – once he was liberated he had to spend a year in a hospital in Atlantic City to re-open his collapsed stomach. The Irish Catholic tradition in McNeill’s family dictated that one son must join the Church, but it was his experience as a prisoner of war that convinced him that priesthood was his calling.

“It was one experience I had as a prisoner of war that struck me very deeply. And that was – we were being starved, deliberately, by the Germans. But we had to go out and work in farms. And we were at this farm chopping wood and a Polish slave labourer was mixing the mash for the animals. And the mash had potatoes and carrots and so I am looking at the food and the slave labourer reached in and took a potato and threw it at me.”

That slave labourer would have been killed if he had been caught.

“I made a gesture of thanks and he made the sign of the cross, making it clear that it was because of his religious faith that he was risking his life for me. And that really impacted – I wanted that kind of courage to risk my life to help somebody and that really made a very deep impression on me.”

McNeill has a happy air about him that allows him to speak of his experience as a prisoner of war with a peaceful resilience. He often looks at his partner of 48 years, Charlie Chiarelli, to help him remember events and dates, and it is impossible not to notice how much these two men care about each other.

“I remember I was praying every day for the day of my liberation, praying to Mary, the mother of God, that I would be liberated on May the first. Well, she was late, it was May second,” he says, chuckling.

As soon as McNeill came out of the hospital after an intensive and long treatment to counter the damages of starvation, he joined the Jesuits’ order.

He originally found his activist voice when protesting against the Vietnam war, but it was after the 1969 Stonewall riots that he started being vocal in the LGBT movement. He believes that all people have a right to faith and religion, so he started focusing his ministry on LGBT people who had lost faith, been shunned by their church and generally ostracized by religion.

In 1976 he published The Church and the Homosexual. In response to the public uproar McNeill went on the Today Show and came out as a gay man to 20 million people across America.

“Actually [Charlie and I] were torn out of the closet,” he laughs. “by Tom Brokaw, who on his first day on NBC interviewed me and he asked me if – we were talking about my book The Church and the Homosexual – and he asked me if I were gay and I said yes, I am and that was my first… on NBC, with 20 million [viewers.]”

On April 14th 1987 McNeill’s superiors came to his apartment in New York City and read a Decree of Expulsion that had come directly from the Vatican.

“It was very painful,” he tells me. “I had been 40 years in the Jesuits and loved the order, it was my family, so being expelled was a very difficult and painful experience.”

It was painful, but his partner Charlie is a constant source of comfort and love for McNeill. It seems obvious to the Jesuit that the love between them cannot possibly be “an objective disorder” and “a more or less strong tendency ordered toward an intrinsic moral evil,” like his colleague Cardinal Ratzinger wrote in response to The Church and the Homosexual.

I first heard of John McNeill when I was covering the 21st Mix Festival of Culture of Diversity in Rio de Janeiro, Brazil, an LGBT movie festival (the largest of its kind in Latin America), where the biopic Taking a Chance on God was shown. It tells McNeill’s story and carries a message of acceptance, challenging the Church’s negative judgement of same-sex relationships.

The film’s co-producer and co-editor Ilene Cutler has been following screenings all over the world. After the documentary Cutler took questions from the audience. One teary-eyed man stood up and thanked her and McNeill for making the film. He told Cutler and the people in the audience that, like McNeill, he had been expelled from his own church because of his sexuality. His boyfriend held his hand once he sat back down.

On hearing this, McNeill seemed pleased and asked questions about the showing. Were there Portuguese subtitles? There were. His question indicates he prizes accessibility and inclusion, especially when it comes to this documentary as he feels it could change lives. This is why the movie’s director Brendan Fay is currently raising money to pay copyright fees to get the documentary onto PBS. McNeill believes that if the film is brought to everyone’s homes it would not only change the lives of religious LGBT people but also change the minds of people who are not already allies.

“He loves you like you are. Because the fundamental truth is that we don’t choose to be gay, God made us gay, so our gayness is a different… most people most church people, the hierarchy think you choose to be gay but that’s not true.”

A common argument used by the Catholic Church is that maybe homosexuals don’t choose their sexuality, but they do choose to act on their same-sex cravings. If one is born gay, it is a test from God where that person must resist temptation. But McNeill feels that God is not so cruel as to require this from his children.

“My recent book is Sex As God Intended. And my point is that God created us, God would be sadistic if he created you gay and said ‘you can’t act on it.’ Everyone has a right to – a sexual right. And they also have the duty to use their sex appropriately, you know. No dealing with minors or rape anything like that but I think if any human, gay or straight, has sex in a consenting relationship – especially a loving relationship – then I think God approves of it.”

Thirty years ago McNeill was expelled from the church he loved and lived by. Today, Pope Francis has been asking for acceptance and no judgement towards the LGBT community. It is incredible that in McNeill’s lifetime such a radical turnabout has come to be and while he is excited to hear the head of the Catholic Church is urging acceptance he says other church members are not as pleased.

“Yes, [Pope Francis] is moving in that direction. At least that’s my impression. His statement ‘who are we to judge?’ sort of removes the traditional totally negative judgement of gay relationships. So I thank God for him every day. [Other Church members] have been quiet and understandably so. I think they are unhappy with his liberal attitude, you know? And challenged by it because they’ve been anything but liberal.”

McNeill also told me, in a hopeful chuckle, of a rumour that Pope Francis had read his book The Church and the Homosexual many years ago, when he was still a Jesuit in Argentina.

His relationship with Charlie, of almost fifty years, seems to be a happy, relaxed one. They met on New Year’s Eve 48 years ago and have been together ever since. They both feel that their long-term commitment breaks the LGBT stereotype the Church clings to – that being a homosexual equals depravity, promiscuity and sin.

“I think that’s why my ministry is more effective. Our forty eight year history is an important part. I mean, most people when they say ‘gay,’ they don’t think ‘love.’ They think ‘sexual,’ ‘indulgence,’ etc. But they don’t normally think in terms of a loving relationship, you know? Gay people fall in love”.

McNeill is currently semi-retired but he still ministers to the LGBT community. The next big step for him, Charlie and the Taking a Chance on God film crew is to get the documentary to PBS so that it reaches homes across America. 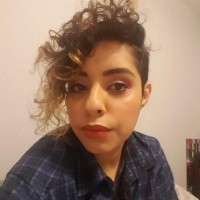 Nicole is a freelance journalist based in Brazil and a University of Sheffield journalism graduate. She writes about politics, current events, feminism, human rights and pop culture. She is an avid reader, loves photography and baking.