No Fats, No Femmes, No Asians: Adventures in Identity

This is my very first joke.

I am four years old. My parents are allowing my brother, sister and I to sleep in the same room so that we can celebrate the installation of dozens of glow-in-the-dark stars on my sister’s bedroom ceiling. My brother and I are camped out on the floor while my sister, a wise twelve to our four and six, respectively, explains the ins and outs of this new technology.

This statement, as sincere as everything else I say at the age of four, is in direct response to the intro credits of Quantum Leap, which is appointment television in my household (and in the household of anyone else with good taste in 1992). It’s with no shame that I admit that Scott Bakula is probably the catalyst for my earliest sexual feelings. His naked body, awash in blue smoke, is maybe the most amazing thing my four year-old brain can process, and gives me cravings to see more boys like that awash in blue smoke.

(It should be noted that after revisiting the show recently, it is pointed out to me that Scott isn’t actually naked in that blue smoke, but at four years old, this is what I think a naked body looks like because, even though I am myself in possession of a naked body, I am four years old and an idiot).

My brother and my sister cackle wildly at my statement, “getting” the joke that isn’t a joke. I am silent. I don’t understand why this is funny. It would be a couple more years before they tell me this is wrong. It will be a couple more after that before someone explains why my brother and sister are white and I am not.

I, like many other Korean “Jeffs” and “Beckys,” am adopted. We popped up in many suburban white households in the ‘80s through the ‘90s, due in part to Korea’s relaxed adoption policies, but mostly because Asian babies are unequivocally the cutest babies. My family is warm, kind, and very, very Christian. But they are my family, and I never (except for one “you’re not my real mom!” moment that I’m not particularly proud of) think of them as anything but that.

My parents strike a good balance between explaining carefully why my face is not their face, and treating the whole thing as a non issue. I am homeschooled, which makes things a little easier on them.

I watch home movies of my family meeting me at the airport, and wish there was something worth submitting to Bob Saget. I am given ugly Korean Christmas ornaments one year and cry because I want Wonder Woman. I am told my birth name, and don’t understand why someone would name a boy “June” (Joon), and then I quickly wish I am a girl named June, because girls named June get to be secretaries and fall in love with ruggedly handsome journalists when they play make believe with their sister and her friends on Saturday afternoons. Boys named Joel do not.

I come out of the closet twice more between the ages of 12 and 16. About twelve times more if you count the number of times I write, “Please, God, don’t let me be gay,” in my prayer journal or post anxious questions about the heavenly fate of homosexuals on Christian message boards in the early days of internet anonymity. Thirteen more, if you count the time I named my cat “Rock Hudson.”

Through homeschooling I manage to escape bullying and uncomfortable questions and sex ed and evolution. I sit quietly most days, reading books and getting the answers for my math work directly from the answer key (I’ll regret this later on, which is a different confessional essay entirely). I watch as my brother educates himself by playing The Legend of Zelda for hours and hours on end, and read aloud all the talky parts. You know: drama class. At some point I decide I want to go to college someday, and convince my parents to send me to public school despite their numerous concerns about drugs and secularism.

It only takes a month of public education and I am in love with a boy named Steven who stands in front of me in Concert Choir (the best choir, in case you were curious — I am very talented). A month after that I am an out and proud gay teen.

I embrace it wholly and completely. I am genetically engineered (literally, depending on what science you subscribe to) to fit into this world. I listen to Wicked on loop. I crusade to start a gay-straight alliance in my high school. I triumphantly play one season of JV basketball in an (ill-advised) attempt to shatter everyone’s idea of gay stereotypes. I do the morning announcements because I’m charismatic and like attention.

I have been gay for ten years now, and things are going really well. Thanks for asking.

I have been Asian for my entire life, and I still don’t know exactly what the fuck that means.

“I’m just not that into Asian guys”

This is the Korean Christmas ornaments all over again.

In truth, this is maybe the first time it will dawn on me that my race and my sexuality are inexorably linked. I am sad that this sort of paradigm-shifting, world-altering moment is happening in the back of a Pontiac Sunfire.

I will hear this many more times. I will read its every variation on dating websites and the profiles of men of varying shapes, sizes, and colors. Sometimes it’s preceded by the sincerest of apologies (“Sorry, not into Azns”), sometimes it pops up in a list (“No fats, no femmes, no Asians”) and sometimes it’s a little more implicit (“whites only”).

I’m horrified, obviously. This is racism, right? This feels like racism.

But then, this never quite computes for me. Because how do they know? They just feel it in their bones? Because as I’m hearing this defense spoken to me, all I hear is: “You all look identical. I feel it in my bones.” Like an old mountain witch who knows when it’s about to rain. White men on the internet apparently just know that whatever makes one Asian repulsive to them makes us all repulsive to them.

When I hear this, I want to run after them and ask, “Is it a cultural thing?” Maybe they think I’m too submissive in bed because I have a tiger mom, and I want to scream out into the vast emptiness of the internet, “Oh, but I don’t have one of those! I have a regular white mom, like you! I got mediocre grades at best…!”

In other words: I’m not like the rest of them.

That echoes back to me, because the internet is not a vacuum. It’s a funhouse where all the walls are mirrors that take the features you didn’t even realize were your worst and blows them all up for you to analyze and obsess over. I look at myself and expect to see a nice, funny gay guy who just happens to be Asian, and instead I see a racist mountain witch I just got done railing against in my blog.

This is getting complicated.

I laugh, because I’m naked and he’s hot, and baffling non-sequiturs aside, this had been a pretty fulfilling sexual experience thus far. But I make a mental note to revisit this and turn it over and over again in my brain until my head feels like it might explode.

He’s been with a lot of Asian guys. Or so he says. He doesn’t just like Asian guys, he likes guys who look Asian, too.

“I dated a Spanish guy once, but you’d never know it. He looked Filipino,” he tells me confidently.  Believe it or not, this is all very comforting to me in the moment.

He’s a “rice queen,” a guy who seeks out guys like me. Or in his case, guys who look like me. But I’m different, apparently. I kiss differently than the Korean yoga teacher or the Japanese guy who “did something with art, I don’t know, he was a terrible fuck.” But I’m a good fuck. Take the little victories where you can, I guess.

Sometimes I feel like I am two entirely separate people. At times I get to be gay and watch old episodes of Queer As Folk with my friends and laugh about how outdated it all is. And then other times I am Asian and watch Looking with my friends and laugh about how a show that apparently takes place in San Francisco has only one Asian with a speaking part, who isn’t even gay.

Two separate threads of a person, completely divorced from one another.

“Don’t think about it so much,” he tells me. I’m back in bed with the rice queen. It’s good advice. But I have a drama degree and a minor in queer theory, so that’s basically, like, impossible. He might as well ask me to stop expressing myself through song, which I will never stop doing. I paid too much money to learn how to do it, after all.

I leave his bed thinking about everything he told me. He won’t be returning my texts, despite the fetish. I stalk him on Facebook and see he found a different Asian boyfriend. Was I not Asian enough? Should I kiss worse? Is that a thing? I honestly don’t know how we’re supposed to be, and this is what I hate most. That I’m learning what it means to be Asian from this man and his beard and his experiences. I hate that the extent of my own personal knowledge about my heritage is that we have exceptionally ugly Christmas ornaments.

I’m still untangling all of this in my mind. I’m still figuring out how I can Parent Trap both of my identities into a room and have them sit down and talk and fall in love again so I can feel like a whole person, a confident person. I hope this all doesn’t make me seem broken, because that’s not how I feel. Just, incomplete.

I think back to my sister’s bedroom. I think back to how clear everything was at four years old. I like to see naked boys better than naked girls. This is still true. I focus on what’s clear, what I know. Scott Bakula. Blue smoke. I am the cutest part about all of our family portraits. It’s not complicated, when you think like a four-year-old.

Someday it will be that simple again. Someday I’ll be lying in bed with a man who isn’t there despite or because of my race. We’ll talk about jean jackets and comic books and cats; identity politics will seem very boring because in this future, the future where I have a boyfriend, everything looks like Brandy’s remake of Cinderella. Sex will feel great because in this future all sex will be unprotected, because it’s this is how fictional the future looks to me.

Until then, all I know is Korean Christmas ornaments are terribly ugly. 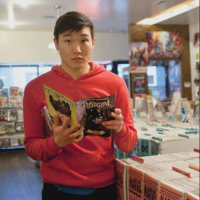 Joel Kim Booster is a comedian and writer living in Brooklyn and deep down really just wants everyone to like him.