A Few of Fraulein Maria’s Favorite Things, As Ranked by Louisa Von Trapp

1. Crisp Apple Strudels: Clearly the best thing on the list, though I have to say that the third-to-last cook we had in our Salzburg home made far better apple strudels than any I’ve tasted since. Sadly, Frau Gensler hated whistles, marching, and frogs, and she up and quit on us with no notice. It is so hard to find reliable help these days. Our last cook, Frau Jurgen, made merely acceptable strudels, though when piled with whipped cream they were not bad. Still, now that I think about it, we left her to the tender mercies of the Nazis without a second thought when we escaped from the music festival. Maybe they liked strudels. In any case, I think I’ll go have a slice of strudel right now.

2. Schnitzel with Noodles. A close second to the apple strudels. I bet they never got food like that at the stupid abbey. No wonder Fraulein Maria ate so much when she showed up. Frau Jurgen made awfully good spatzle, which I think is probably what Maria meant by “noodles,” but she sacrificed accuracy for the sake of the rhyme scheme, which is just like her.

3. Raindrops on Roses: Pretty enough. I’ll allow this as a reasonable favorite thing, albeit a little sentimental. Liesl would like it a lot, what with all her mooning around after young Nazis in pouring rainstorms.

4. Bright Copper Kettles: I can’t say I’ve ever really given bright copper kettles much thought, but they sound pleasant enough. Nice and shiny, and like maybe someone could make me a nice pot of soup in it. It’s a little random, but then Fraulein Maria is often a little random-seeming, what with all her breaking into song at odd moments and those terrible clothes and whatnot.

5. Whiskers on Kittens: Are there really kittens without whiskers? Or are the whiskers of kittens, per se, appreciably better than those of cats? I don’t know. I like kittens fine but this smells of the lamp. What about “playing with kittens”? Isn’t that more fun and comforting in a scary thunderstorm than their whiskers?

6. Sleigh Bells: Meh. Travel by sleigh: chilly and inefficient. I only want to hear about sleigh bells if Santa Claus and presents are involved. And the presents had better not be in any brown paper tied up with string.

7. Cream-Colored Ponies: They sound nice but require a lot of currying, especially if you’re out riding them in those ding-dang silver white winters that melt into muddy springs (see below). Give me a nice dapple grey any time, or, who are we kidding, a fast car.

8. Girls in White Dresses with Blue Satin Sashes: This only ranks as high as it does because white dresses with blue satin sashes, while infantilizing, are so much better than freaking stiff upholstery dresses in a baby-poop-colored toile print with weird matching kerchiefs. (Then again, at least we girls didn’t have to wear patterned lederhosen.) Okay, now that I’ve revisited that horror maybe I should rank white dresses with blue satin sashes higher after all.

9. Warm Woolen Mittens: Wool mittens are itchy. My later years in the cold climate of Vermont, in the years after our post-Anschluss escape from the Nazis, showed me that we were only using wool while waiting for the invention of a wide variety of synthetic, waterproof materials for truly warm mitten construction. Even if you prefer the traditional look and cute, colorful feel of a knit mitten, I’d suggest acrylic to prevent skin irritation. That said, I’ll give this one a pass since technical and wicking cold-weather materials were few and far between in Austria in 1938. Truth be told, it kind of sucked back then, even if you were growing up ultra-rich on a fancy estate.

10. Snowflakes that Stay on My Nose and Eyelashes: If the snowflakes aren’t melting once they’re on my face, it’s too goddamn cold out. Someone get me a cup of hot chocolate, crisp apple strudel on the side.

11. Brown Paper Packages Tied Up With Strings: I guess these are fine if you like boring things and hate the convenience of tape. Personally I like my packages in colorful wrapping paper, with ribbon, or, better yet, a gift bag with jaunty tissue paper poking out. But then again, I never even thought of entering a convent. Maybe if you’re the kind of person to whom wearing a wimple appeals, a brown paper package is the height of excitement.

12. Wild Geese that Fly with the Moon on their Wings: This sounds so nice. Majestic waterfowl in flight! In the moonlight! Great! But let’s take a closer look. First of all, geese are aggressive. They will bite their own grandmother to get at a moldy piece of bread and they would have knocked down wee Gretel as soon as look at her. Second, they are basically loudly honking machines for the production of foul green shit. Third, I grant you that the moon on their wings is a poetic touch. But if they are flying and you are looking at them, how the hell will you see the moon on their wings? You are below them, the moon is above, shining presumably on the tops of their wings. Can’t see it. Don’t care.

13. Silver White Winters that Melt into Springs: This manages to make mud sound poetic, but let’s be real, here’s what we’re talking about when we talk about snowmelt: Sodden lawns dotted with the dog shit and trash the snow has been covering all winter long.

14. Doorbells. Seriously, Fraulein Maria, doorbells? You don’t remember what the heck a doorbell reveals? Option one: A faux-friendly Baroness coming to marry one’s recently emotionally reconnected dad for his money, together with her opportunistic pal who’s there to leech off the family and exploit all the kids. And that’s the good news, because behind Doorbell Number Two is a Nazi telegraph boy there to seduce one’s older sister and send said dad off to indentured servitude as part of the Third Reich’s war machine in Berlin. If that’s your favorite, spare me from the things you don’t like. 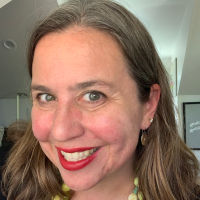 Kate Washington is a freelance writer based in northern California. She has two young daughters who request songs from The Sound of Music more than any other movie (yes, even Frozen.)