This post was brought to you by Siri Raasch, who once worked for an unusual older woman in Maine.

I have been prepping to be an old lady my entire life. When I was in third grade I had a subscription to Reader’s Digest. I ate Raisin Bran for breakfast. And every Sunday night at eight, after 60 Minutes, I plunked myself in front of the television and waited, rapt, for the noodling piano that announced the start of Murder, She Wrote.

If there is one non-cartoon television show that defined my childhood, Murder, She Wrote is it. I don’t remember who introduced me to the pleasures of Jessica “J.B.” Fletcher’s keenly deductive imagination, though it was probably my grandmother, who had a fondness for the brainy problem-solving heroes of ‘80s television (see also: MacGyver). It was gruesome enough for a seven year old to adore, and satisfying enough for that same seven year old to begin cultivating a lifelong love of the mystery genre, and the lonely (or at least lone) sleuths who were its stars. MSW led directly to Mary Higgins Clark, who led to Agatha Christie, who led to P.D. James, Dorothy Sayers, and Kate Atkinson; to Prime Suspect, Lewis, Sherlock, and Luther. I can even trace my love of The X-Files to MSW: Mulder and Scully have more than a little of the tenacious, analytical Mrs. Fletcher in their DNA, even if that DNA has been genetically modified by a shadow government.

But I’m getting ahead of myself. First, let me tell you a story: a story about a board game. The Murder, She Wrote board game. You didn’t know such a thing existed? Neither did I, before my friend Sarah brought it one summer to camp. (For the sake of clarity: I mean camp in the upstate New York sense, i.e., a small un-insulated cottage on a freshwater lake that has a preponderance of mismatched glasses and forks with wonky tines and maybe exposed studs but is the greatest place to family-vacation on earth.) Sarah and I met in day care, and had been friends for years—but this year, when she came to visit, she unknowingly brought the one thing that would enflame my jealousy. She brought this:

Clue was already my favorite board game. Its gameplay satisfied the bloodlust and penchant for solving things that, like a good grasshopper, I had been learning from J.B. for years; plus I am an only child and had perpetual dibs on Miss Scarlet. (And the movie—don’t get me started. It is perfect.) Here was a game not unlike Clue—the object being to solve, from a rogue’s gallery of Cabot Cove’s finest, whodunnit—with an added twist: one of the players WAS the murderer. If you drew the murderer card, you visited people around the Cove spaces on the board and replaced their alive character tile with a dead one, thereby secretly MURDERING. The trick, if you were a sleuth, was remembering who was alive and who was dead, and when, so that you might deduce whom among you was a stone cold killer. It was the best game I had ever played, and when Sarah left, it left too.

For years, I searched. In those days before the Internet, we knew how to yearn. How to long, how to pine. How to tilt one’s head all the way back and scan the towering wall of board games in Kaybee Toys for a blue edge, a flash of reddish-blonde Jessica Fletcher hair. But she was never there. I never found her.

Until I was a teenager, taking a break from my job at the Museum of Science and Technology’s gift shop. For some reason there was a flea market/sidewalk sale in the surrounding square. And there she was: bright blue-eyed and red-blonde haired, hardly foxed, waiting for me. I think she cost five dollars, and I think, in my life, I have played the game maybe three times—one of the perils of being an only child; despite having game friends, Murder, She Wrote really works best with many players—but the important thing is that finding that board game renewed my faith in the great mystery of happenstance.  With one real-life deus ex machina, Jessica Fletcher came back into my life.

She wasn’t done with me, nor I with her.

In my mid-twenties I started to joke about it. I told people I wanted to grow up to be Jessica Fletcher. It seemed a funny shorthand description of my essential personality: I’m highly observant. I like to read. I like to write. I’m an indoor girl, and I have a cat. I know how to kill you with poison (but I won’t). I’d probably do better in a small town where I loved a lot of people, where said people loved me too but knew when to leave me alone.

And then I realized it wasn’t a joke at all. I do want to grow up to be Jessica Fletcher. All those hours watching Jess tromp around Cabot Cove had drawn up a blueprint for a life, and had presented an ideal woman to become: A woman who writes books. Who supports herself by writing those books, who has artistic integrity but isn’t paralyzed by her own insecurities as an artist and remains humble in the face of success. Who gets intense satisfaction from finding the right word, finishing her novel and closing that sweet leather portfolio.

And a woman who pays attention—who notices everything, remembers everything, and uses her intelligence and empathy to make sense of the world. Who sees humans be their worst, most selfish and violent selves, and treats them compassionately even as she’s squeezing confessions out of them.  Who isn’t afraid to follow a hunch, and isn’t afraid of people not liking her. A woman on her own—a widow, yes, and with a past, but not defined by either—who’s a member of a lively community and has deep friendships with men and women alike. A woman with nieces and nephews and old friends all over the world, but who would have traveled even if she didn’t have so many people to visit. A curious woman with tremendous agency, who never apologizes for being smart and can equally rock the hell out of gown, a suit, and a chambray shirt.

I haven’t even mentioned that Jessica Fletcher was played by Angela Lansbury, who has brought to life everything from a singing teapot to a cannibalistic meat-pie shop proprietress, and who, just his month, was named a Dame Commander of the British Empire by QE herself. Dame Angela is worthy of not a little adulation. But this is about Jessica Fletcher, and how I came to recognize what I was really learning from eight to nine on Sunday nights. There are far worse heroes for little girls to have than a woman pushing sixty who writes mysteries and solves murders. And I hope somewhere, thanks to syndicated and streaming TV, kids are still learning, by her example, the same lessons she taught me: how to look past the dead bodies and see a way of living life. 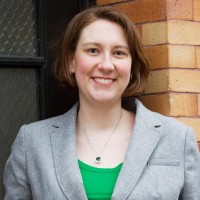 Kate is the author of the novels Bellweather Rhapsody and This Must Be the Place. She tweets about her cat at @kateracculia.