The Rise Of The Sad Girl

In 2014, feelings have been verified. We live in an era where people don’t overtly talk about their feelings IRL — as much as they let it out in tweets with hashtags and blog about them to strangers on the world wide web. Lo and behold, the Internet has birthed a new breed: sad girls.

No, sad girls aren’t the girls you see walking around with the teary-eyed gaze of someone who looks like they could break down at any instant if nudged the wrong way. (Nine Day’s “Absolutely (Story Of A Girl)” should not come to mind.) The sad girl is sarcastic, witty and self-deprecating. (And probably speaks in a monotone.) She listens to better music than you and might spend her alone time watching French films from the ‘60s or angsty TV shows from the ‘90s. (This stuff really speaks to her.) The sad girl is a living, breathing Daria, but has more friends because even an independent woman doesn’t want to be lonely all the time. She likes pizza, but it’s not the only thing she orders from the menu. (Eating your feelings requires a range of snacks.) The sad girl has a killer sense of style, but deep down, she’s most comfortable in her sweatpants, hair tie, chillin’ with no make-up on. (She really likes Drake, especially Baby Drake.) She’s funny in a #dark way because she likes her comedy like she likes her coffee: “dark, bitter and too hot for you” (source: some anon on Tumblr).

I remember when I first heard the term “sad girl”– it was part of this joke my friends and I used to throw around called “Sad Girl Saturday” (which would be an awesome girl band name btw and I’m copyrighting it right now). Any time we found ourselves alone with no plans for the weekend, we would dub it “Sad Girl Saturday” and proceed to jest about how unpopular and uncool we were. (We usually wound up at someone’s apartment and had an unscheduled ladies night, though, so fun was had.) Once I left to study in London, the reference really started to resonate with me. After two months passed, I transformed from a spontaneous world explorer to a reclusive hermit crab who yearned for the comforts of my American way of life. I was genuinely sad almost every weekend, growing more homesick and less adventurous– being on your own in a foreign land for four months is quite isolating. My sadness was real and I didn’t know how to deal with it. I admit to being a sensitive girl, but I have never felt comfortable conveying my feelings towards others, especially if it results in a confrontation because I am passive aggressive by nature.

As I recall spending my last night of spring break in Madrid crying into a towel for hours because my travel group ditched me, I remember being more upset over the fact that I was crying. I let someone work me up to a point where I physically cried, but I was disappointed in myself for my initial reaction. (“brb crying” was legit, I actually escaped to the hostel bathroom so I could have a cry session.) When I returned, I briefly disconnected from the “real world” and reconnected to my go-to sanctuary of solitude–Twitter. It was here that I found sources that provided solutions for my internal dilemmas, and that’s when “living every day like it’s Sad Girl Saturday” officially became a part of my reality (and personal identity). Here were these blogs practically sharing the untold stories of my so-called awkward life, and they had been doing it months before I knew they existed. These women got me on a level that no one ever had before, and they weren’t ashamed about anything. The day I received much-needed #realtalk from a friend in East London, she said the most profound thing to me that I have ever heard in my entire life: “Your feelings are valid.” And in that moment, nothing was the same (#NWTS).

Truth be told, everything isn’t always going to be all right and that’s totally OK, but no matter the circumstance, you have a right to feel the way that you do. People are always scared to express their emotions in front of each other. Instead, they suppress and keep them to themselves. The sad girl recognizes that it’s not possible to be happy 24/7, but she finds comfort in her sadness and uses it to channel positive vibes. Instead of dwelling on the past, she learns from her mistakes and slowly, but surely finds a way to move on. (But boys suck, forever and always.) And while she rides on the struggle bus, she has a group of women behind her to keep her company the whole way.

The Internet can be a wonderful thing when it has spaces that provide people with a supportive community to identify with. Furthermore, sad girls are assertive women who respect themselves. Sad girls are in touch with their emotions, and they express them creatively through the written word and a variety of other art forms. Sad girls embrace their feelings and reflect on their experiences because to ignore them would be a disservice to the self. Sad girls don’t let anyone belittle them, their accomplishments or their feelings. Sad girls are feminists and they are proud of the quirky skin they are in. Sad girls know their self-worth and acknowledge their value by having standards. Most importantly, sad girls empower themselves and each other. The sad girl truly, deeply cares; usually a little too much, but it’s whatever.

Are you a sad girl? Join the movement over at sadgirlsguide.com. 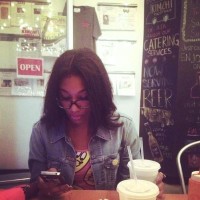 Raised in the suburbs of New Jersey in a Wawa Nation, Sydney E. Gore was the coolest Syd on the block before she could walk the walk and talk the talk. Sydney currently studies Journalism and Marketing undergrad at American University in Washington, D.C. One-time hand model and full-time writer, Sydney lives vicariously through books, film and television. She is fully convinced that her life is a cancelled ‘90s sitcom series, and music is her boyfriend forever.