Dreams I’ve Had Since My Best Friend Died

In the week after your death, you visit many of your loved ones in their sleep. Everyone has some vision in which you appear, smiling and tender, touching them gently and dispensing words of wisdom (or, as was often your wont in life, Spice Girls lyrics). To most of your friends and family, there is comfort in this. Through the ache of your death, the almost unimaginable emptiness of a world without you in it, this sliver of hope gleams: She’s gone, but she’s still thinking of us. She’s still laughing in the Great Whatever Comes Next. She knows how much we miss her. She wants us to know it will be okay.

You don’t come to me. I receive no reassurances, no affirmation that you love me or that we’ll see each other again. I haven’t believed in life after death since I was ten years old, but I still resent this slight. Why do you have a goodbye for everyone but me?

The first time I dream about you, you have been dead for thirteen days, ashes for seven. I am following you down the halls of our high school, which is flooded, the water cold and rising past our ankles. My jeans are rolled up to the knee. You wear your bridesmaid dress from my wedding, which was the last day I saw you alive, and only one shoe. You keep looking back over your shoulder – not at me – and I catch glimpses of your face. You don’t look like yourself.

I follow you out a window, the one we used to climb out of to skip class, into a courtyard I’ve never seen before. There’s a swimming pool in the center, overflowing – that’s where the water swirling up my shins is coming from. “I didn’t know we had a pool,” I say. Behind me, inside the building, people are running to escape the flood. “It’s too shallow,” you say. “It can’t hold everything.” There’s a tattoo of birds covering your right arm. I don’t know why I want to throw up until I wake and remember that you died with that tattoo unfinished.

I have this recurring scene that shows up in all of my nightmares. Each time, something terrible is happening – someone has broken into my house, a man with a knife is following me, my brother is sick, my partner has fallen and is lying in a pool of blood. Each time, I pull out my phone to call for help, but I can’t complete the call. My fingers are numb and fumbling and I drop the phone and it breaks, or I dial the number wrong, or I have no service, or I make the call and try to scream my panic to whoever’s listening but my throat is dry and nothing comes out but a pathetic gasping wheeze.

Every time I have this dream, the same thought runs through my mind, with perfect coherence and clarity: I’ve dreamed about this so many times, and now it’s happening for real. I knew it. The resignation, the powerlessness, the inevitability are crushing, and far more frightening than the danger is the knowledge that I knew it was coming all along, and there was nothing I could do to avoid it. It’s the same feeling that sinks like sediment in my chest when I wake up from a dream about you.

In this dream, you are sick and everyone knows it, as opposed to in real life, where you were sick and no one knew until it was too late. Your husband asks you to move out of your apartment, so that his new girlfriend can move in. You are dying; she is not. He has to think about his future.

I visit you in your new place, which is an enormous bed in front of an enormous window. There is no other furniture. There are no posters or paintings on the walls. The window looks out over an unfamiliar city, blurry with rain. Your blankets and sheets are blue-gray, rain-colored. You haven’t gotten out of bed in weeks. You roll over and face the windowless wall, and I know it’s so you won’t have to admit that you don’t remember my name.

It is a year after your death and you knock on my door. “Where have you been?” I say. I don’t remember that you are dead, just that I haven’t seen you in an unreasonably long time. “I’ve missed you! So much has happened!”

“I tried to call you,” you say with a shrug. “I’ve been in Europe, touring with my band.”

“Your band?” You bought an acoustic guitar in high school, learned about three songs, and never picked it up again. “I thought you stopped playing guitar.”

“I’m the drummer,” you explain. You lead me outside and show me your tour bus, parked in the street. (How did you get it here from Europe?) It’s covered in bright-colored graffiti, but I’m not convinced it’s really yours until you show me the inside. The walls are plastered in pictures ripped from magazines, handwritten set lists, and band posters – exactly the same way you decorated your bedroom in high school. I recognize the Bon Jovi picture that used to hang above your bed.

I’m at a party and everyone knows each other but me. When I try to speak, the volume of conversation around me gets louder, until my voice is drowned out. I’m shouting without making a sound, and finally I give up and walk outside, crying and feeling helpless. Heather was supposed to be here, I think, resenting you for being late again.

The sun is going down, and I sit on the porch while the party thunders inside. I feel, rather than see, you sitting down beside me. I should be thrilled to see you, but I just feel relieved, leaning into the solid weight and warmth of your shoulder.

“I thought you were going to be here,” I say. “You were supposed to be here before.”

“I’m a firefighter,” you explain. “I sail around the world fighting fires. I’ve been to Alaska.” You point across the street, which I realize now is a frozen river. On the other side of the river is a landscape of snow and barren trees that I immediately recognize as Alaska.

“Why didn’t you come home sooner?” I ask.

“There are a lot of fires in Alaska,” you say. We lean against each other as the sun goes down over the ice. Everything is perfectly silent.

It’s my wedding day again. I am getting married in my father’s backyard, which is a beautiful sun-soaked field in the Rocky Mountains with a stream running through it, and also kind of the library from Buffy the Vampire Slayer. My wedding party is lining up, but you haven’t appeared. You’re late, just like you were the day of my real wedding. I try and try to call you, to ask where you are, to hear your voice. I am on the edge of panic. My fingers are numb, and even though I’ve known your number by heart for thirteen years, I keep dialing wrong. I drop my phone and it shatters into a thousand pieces. I think, I should have known this would happen. 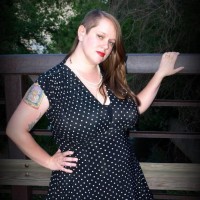