Let’s do the time warp again.

We’re coming up on the 40th anniversary of one of the world’s most well-known cult films, The Rocky Horror Picture Show. To celebrate, MAC has released a celebratory line of cosmetics so you can facially embody, with perfect screen accuracy, your favorite character from the film.

It’s actually kind of amazing no major makeup company has done this before. Rocky Horror fans cosplayed characters before the word “cosplay” was coined. Everyone into Rocky is someone from Rocky. Fans recreate their spirit-characters with an almost religious devotion (“cult film” is not just a clever name.) It’s almost as if, in reincarnating these characters, the fans reify something essential in themselves.

Me, I’ve always been Columbia. When I open my heart and allow a furtive peek into the innermost mansions of my ribcage’s interior castle, there is Columbia, flashing nip and engaging in rough, exhibitionistic grinding with bad-news biker, Eddie. Columbia is the impetuous bisexual slut in a suit of ten thousand sparkles tap-dancing along my nadis, spinning in shimmering, spastic vortexes  and falling over gracelessly in each chakra. If I were standing at the liminal boundary between two mystic worlds, and in order to pass through the threshold I had to gaze into a magic mirror and confront my True Self, I would see, in that looking glass, a cloudy reflection of Columbia in torn flannel pajamas and Mickey Mouse ears, pining for a brilliant, beautiful narcissist as she barters for status with whatever charm and talent she can collect from the piecemeal hipster juggernaut of her high-pitched topple through spacetime.

I saw Rocky Horror for the first time when I was fourteen at a midnight show on Halloween in a smoke-filled film-works bar (it used to be legal to smoke in bars, kids – I’m old) in downtown Indianapolis. I went with my cool friend Katie, who’s mom, who looked, in retrospect, exactly like Stevie Nicks, took us during an autumn sleepover. The two of us gawky, breast-less eighth-graders dressed (impeccably) like Gene Simmons and Ace Frehley from KISS. No one asked our age or our gender.

Katie’s mom had coached us on the audience participation aspect of the experience, and even gave us playing cards and rolls of toilet paper to throw at the appropriate times. After the shadowcast sacrificed all of the virgins (Katie’s mom, thankfully, did not turn us in), the film began. Below the crimson, disembodied lips on screen, a slender, older girl (she told me she was sixteen later in the audience when she was sitting on my lap ^_^;;) lip-synched along to “Science Fiction, Double Feature” in lingerie. The film had me at “Michael Rennie was ill the day the earth stood still,” even though 89% of the B-movie references in the opening song went over my head. I was in love with the sequined-corset-wearing, red-lipped, gender-borking, orgy-loving, mad-scientist space-alien sexuality on screen. I think back on this night, fondly, as the end of my childhood. The bicycle-riding, tree-climbing part of me died right there in that filthy Indy dive, giving birth to the inchoate pansexual, genderqueer glam-geek I have now metamorphed into.

I saw that people came to the show dressed as characters from the film, and I knew, in my heart of hearts, that by next Halloween I wanted to have an incredible Columbia costume.

I managed to convince my mom (who is a conservative, Catholic Republican – bless her) to help me create a screen-accurate golden top-hat and tails. I spent hours sewing shimmering stripes onto a pair of black short-shorts. I literally learned how to do makeup so I could do this:

My costume was awesome. I didn’t know just how obsessed with this film I would become over the next two years, or that I would eventually play Columbia in a shadowcast in Louisville, but the costume I made (okay, really, my mom made) eighteen years ago has stayed with me through cross-country moves, breakups, and pseudo-Buddhist worldly possession relinquishments. It’s still my go-to for last minute Halloween parties.

I haven’t been to a midnight show in almost ten years, but when the Boston Marathon bombing and subsequent city-wide shut-down happened last spring, the most comforting music I could find to listen to was the soundtrack to The Rocky Horror Picture Show.

I know so many Magentas. Powerful goth-witches with heavy silver jewelry and hair as immense and mighty as their expertly-wielded sexuality. We’ve all met Franks. Charismatic narcissists who bring people together and invite (or coerce) them to explore new experiences and create community. You can’t throw a roll of toilet paper without hitting a Janet. A norm-cum-freak who just needs the tiniest nudge out of their comfort zone to let their true pervert nature flap freely in the wind.

Magenta is cool. Frank is cool. Janet is even cool under her initial uncoolness. Columbia is not cool. She has a squeaky, childlike voice and is continually rejected, cast aside, and ignored. The titles call her a Groupie, and we understand that she’s banging Frank, or at least used to bang Frank before his boner for her was swallowed whole by his boner for his man-toy Rocky.

She has lots and lots of feelings and is as unapologetic about them as she is about her sluttiness. She loves Frank despite how poorly he treats her. She sings that she “very nearly loved” Eddie. She casually does it with Magenta while she watches Rocky touch-a-touch-a-touch-a-touch Janet.

Unlike the other characters in the castle, Columbia is not an employee, a creation, or a prisoner. She is there of her own free will, but she also has very little power. Frank uses her and tosses her away when she doesn’t amuse him anymore. She can’t do anything to save Eddie from Frank’s murderous chainsaw. When Frank is killed by Riff Raff, she shrieks in anguish. This is one of the least wink-nudgey and most haunting moments of real emotion in the film. All her cry does, however, is cause Riff Raff to zap her with his raygun. She falls dead rather anti-dramatically, all because she couldn’t control her emotions.

Well I was walking down the street just a-havin’ a think.

I am stupid about love and careless with my heart.

My romantic history is full of unavailable people. There was the detached Buddhist poet who always had one foot in the monastery, the alcoholic commitment-phobe with anger-management issues, the couple I dated who made it clear from the get-go I would never fully be welcome inside their private world, and the endless, hopeless string of people whom I loved but who, for one reason or another, did not return the style or intensity of my feelings.

I’m not ashamed of my romantic history, exactly, but at times I am embarrassed by it. I look at my adult romances and see myself standing tearful in my stupid-ass PJs and Mickey Mouse ears, flashing a vulnerable nipple through the ripped blue flannel as I emphatically declare my love to an egomaniac whose reaction is to raise one dispassionate, sculpted eyebrow and throw a switch which turns me literally to stone. (Columbia is the only person in whole movie to show an R-rated body-part, BTW. If I were writing a douchey academic essay I would say something like this is because she’s the most emotionally naked of all of them, but after some googling about Little Nell’s other work I’m pretty sure it’s because Little Nell likes to show her nips because they’re awesome.)

Perhaps the most embarrassing part is how long it’s always taken me to leave situations that aren’t working. Like Columbia, I could have walked out of any one of these relationships at any time, but I always stayed until the entire castle collapsed on top of me.

Time meant nothing, never would again.

So I’m fourteen, two years before I kiss anyone and four years before I date anyone. I’m vaguely aware that I find lots of different genders attractive, but I don’t identify with any sexuality yet. I definitely have not begun to establish my romantic patterns, but I am inexorably drawn to this character on screen. This is the paradox, where time gets tricky. Was little barely-pubescent Jade in the Indianapolis film-works bar attracted to Columbia because these archetypal proclivities were already somehow wired into me? Or did my random love of this glittery character knit her patterns into my still-forming subconscious? I don’t generally admit to believing in an essential self, but when I look objectively at my unwitting teenage identification with Columbia, and the past eighteen years of sparkly interpersonal tap-dancing, I wonder how much choice I ever had in any of it.

Rose tints my world, keeps me safe from my troubles and pain.

I don’t know if it’s too late to change my Rocky Horror identity, or if it’s even possible. I may never be Magenta, who lurks in the corner and lasers fun-loving poly queers so she can zip off to space and boff her brother. I will not be Frank, who wears that corset so well and is an icon and all but is actually pretty rapey (impersonating someone’s partner to get them to fuck you is super not-okay.) I do not desire or require a Janet-like sexual awakening. I’m awake. I’m an impetuous tap-dancing slut in a suit of ten thousand sparkles, but I have loved. I have loved. 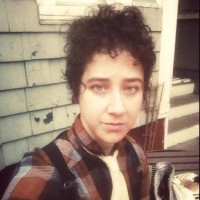 Add a comment
1842741 Comments on How My Rocky Horror Picture Show Identity Both Proves and Disproves the Existence of the Essential Soulhttps%3A%2F%2Fthe-toast.net%2F2014%2F10%2F08%2Frocky-horror-picture-show-identity-proves-disproves-existence-essential-soul%2FHow+My+%3Cem%3ERocky+Horror+Picture+Show%3C%2Fem%3E+Identity+Both+Proves+and+Disproves+the+Existence+of+the+Essential+Soul+2014-10-08+15%3A00%3A09Jade+Sylvanhttp%3A%2F%2Fthe-toast.net%2F%3Fp%3D18427