Have you ever thought about The Things You Normally Do? I hadn’t until now.

I’m sure you can all relate to my rhetorical question about the alienation Doing Things (especially Technology Things) causes in our Modern Lives. I would also like to quote an Established Thinker from a completely different era to lend myself the authority to undergo this seemingly questionable project in the name of Arriving At Greater Truths (which, dear readers, I imply that you will find in this Article if you will keep scrolling past our interstitial ads).

Here I’ll provide a lengthy, banal description of the Thing I Normally Do, interspersed with commentary about just how Inane or Outright Weird this Seemingly Normal Thing To Do is. And yet we all do it. How could I be the first to notice this?

Doing Something I Wouldn’t Normally Do was different than Doing What I Would Normally Do. Sometimes it was hard. Sometimes it was pleasant, because it made me delight in Simple Pleasures that I might not have enjoyed over this Period Of Time otherwise. Like manual labor, when Doing Something Different Than I Would Normally Do was hard, it was actually rewarding. I appeal to my readers’ desire to find pleasant and rewarding things to do, as if this is an option they have never considered for themselves.

For example, thanks to Doing Something I Wouldn’t Normally Do, I realized that we live in a Society. What’s more, did you ever realize that it is a Capitalist Society? And that a lot of Things You Would Normally Do revolve around participating in a Capitalist Society? This is very troubling! But wait, this is also the Information Age. Allow me to use some statistics I researched (provided courtesy of the parts of Society that want you to consume information—are you seeing a pattern yet?) to show the rates at which people Do The Things You Usually Do. These statistics are doubly troubling. Whatever happened to the Good Old Days, when What You Would Normally Do was something different?

Thanks to my Period of Time Doing Something I Wouldn’t Normally Do, I realized that the way we interact with each other is Weird When You Think About It and Definitely Caused By Larger Forces At Work in Society (2). If everyone would Do Something They Wouldn’t Normally Do, then society would almost certainly be different. The inescapable conclusion is that Doing What You Would Normally Do is existentially horrible (as if there is any state of being on this godforsaken plane of consciousness that isn’t existentially horrible).

Yes, life is existentially horrible, but most importantly, thanks to Doing Something I Wouldn’t Normally Do For A Period of Time, I Learned Something that could Change The World. I don’t mean Obama 2012 Change, I mean actually Meaningful, Profound Change. I’m talking about Love. And Peace. Which we should have more of. We could be shifting the entire paradigm, to whatever we’re calling paradigm shifting these days. These are the noblest things that we mere humans can do, and we don’t do them normally enough.

Because I am a humble person, I will acknowledge that I owe my success to the great pioneers of Doing Something You Wouldn’t Normally Do For A Period of Time and Getting Paid To Write About It: Danny Wallace of Yes Man (Now A Major Motion Picture Starring Jim Carrey), A.J. Jacobs of The Year of Living Biblically, and Elizabeth Gilbert of Eat Pray Love (for whom my hatred is eclipsed only by my extreme jealousy).

Without these pioneers, would we ever Do Something We Wouldn’t Normally Do For A Period of Time, let alone write articles about it? I can only hope that one day the many Periods of Time spent honing my capacity for Doing Things I Wouldn’t Normally Do, then writing articles about it and Posting them to Social Media Sites Which Do Not Pay Their Writers (3) will result in a lucrative book deal with one of the Big 5 publishers.

In conclusion: Doing Things I Would Normally Do is existentially horrible, whereas Doing Something I Wouldn’t Normally Do For A Period Of Time has brought me great insight into What It Is All About These Days Anyway. I hope you feel the same, and click the “like” and “share” buttons below to announce that you Read An Article to the world, or at the very least to your family and acquaintance groups.

Click here for the next in my 12-part series: I will NOT Do Something I WOULD Normally Do, For A Period of Time. Is your mind not blown?

1. I acknowledge my long-suffering spouse was present for this Period of Time, but only in the footnotes, and only as a cheap gendered joke.

2. I might make a mention of some of those forces using the adjective “Big” to modify an otherwise innocuous industry noun, but dwelling on this would inevitably lead to the conclusion that we need Systematic Change, which is very difficult to enact and also Existentially Horrible to consider. 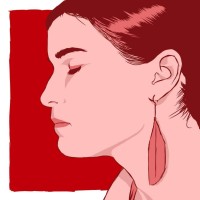 Claire Blechman is an honorable-mention-winning writer. Her work has appeared in The Fiction Desk, Interrobang, the Ploughshares blog, and the Vault Guide to the Top 100 Law Firms. Tweet @cblechman if you want to rep her novel, or if you share her love of copyright and Digital Asset Management.