The Egg, the Nest, and the Wild

Some animals are capable of history. Some are not. Animals I’ve never witnessed looking back include spiders, snakes, and fish. The web is now. The prey is forward. The egg is back.

The boy in Kentucky isn’t happy or sad; he’s working. He threads rainbow beads on black embroidery floss. He made the beads himself and baked them himself, and the house smells like a mixture of plastic and dough and hot aluminum foil. The boy’s bedroom door is locked. The lock can be undone from the outside with a penny or a long fingernail. No one reverses the lock. No one comes in. No one asks about the bracelet the boy is making, in the same way no one asks a sailor how it feels to tie a knot. He ties one knot. He ties the next knot. If he ever asks why he ties the knot, he asks himself.

The boy asks one question. He asks and asks until he doesn’t need to ask anymore. Until the answer is bigger than the question. Until he can’t voice an answer because he is the answer. He asks himself why.

Why is he a boy who needs other boys?

I look back, and no one bothers the boy.

I look closer, and I am the boy.

The long version is I was a boy attracted to other boys in a small town in the country. No first loves. No tragedies. The attraction was enough. I didn’t have to love another man to know I would end up loving another man. I knew I loved myself. There was a moment I realized it. It’s the moment I see if I look back even further.

I look back even further.

You’ve heard how nothing stays buried. You’ve wondered if it’s true. Not in the South. Nothing is ever buried there. It’s thrown in the yard to rust. It’s seen and ignored at the same time.

Which is to say my mother found my journal. We sat on the edge of my bed and talked about keeping sensitive things to ourselves. I was to celebrate my secrets the same way everyone else did. In silence, in my head.

I grew up quietly. I had a pet lizard that absorbed light from a bulb instead of the sun. He ate fruits and vegetables. I ate fried chicken and snack cakes. People have asked about my fondness for reptiles. My answer comforts no one but me. A reptile can’t be unlocked. The only thing I know when I look in the eyes of a lizard is it doesn’t need me at all.

If there’s a dark side to the years of my selfish cultivation, it’s how I exchanged my sensitivity for scales and made the people around me unnecessary. There’s a popular idea that everyone deserves love. I would argue everyone deserves the space to love themselves. All other love is extra.

When I came out as gay to my parents in a letter at age 15, they registered no surprise at the detail of the thing or the mode of the telling. The letter was written on nice paper. The envelope was hand-painted (by me) with yellow watercolor roses. And then my signature, the Y of which turned into a small drawing of a lizard, curled there as another claim.

I handed the letter to my mother then took the dog for a walk. There were questions when I returned. All questions I’d already answered for myself in the darkness in front of the family computer. The screen became a mirror the more I researched, the more I recognized myself in what I found. I did the work of accepting myself. Quiet work. Diligent work. Every day I built a web only to eat it again at night. I was hungry with questions.

The surprise for my parents was the suddenness. In high society, teenage girls have social presentations to celebrate their impending adulthood. Coming out parties. These parties are planned by adults. My parents had no warning. I came to my realization without consulting them. When I handed them the letter, I was handing them an invitation to a party happening the very same day.

Compare it to artistic creation. A song. A painting. A bracelet. The work is done in isolation. One day, the work is ready to be seen. That’s different than the work being finished.

The work is never finished.

Or imagine it the way I never did, the way it must have been for my parents. They gave me quiet, and they gave me room, and I took apart their firstborn son and built another one. The person in my head was never the person in the mirror. I see myself now, almost 30, and the reflection approaches the familiar. I start to resemble myself, the man I always imagined I would be. My family catches up. We travel alongside each other now, or as closely as possible. For maybe the first time, they see the same person I do.

I look back, and I look for details.

The rainbow bracelet is fastened with a soda tab.

If I believed anything back then, I believed it was necessary to make my new self with pieces of my old self, the stuff I had lying around that other people might throw away. Understandable, though I didn’t understand it at the time. The forward thrust of the snake depends on moving side to side first. I would be able to leave Kentucky and keep it with me, too.

In high school, I drew self-portraits. Every piece featured a connector between the Christianity I was given and the queerness I built. A rainbow, a dove, three men representing the Holy Trinity. The first layer of these symbols was easy to explain to anyone who asked. No one asked. The symbols were clear. The second layer was my secret, my journal, a language I continue to develop.

I’m still the boy from Kentucky, even if I live somewhere else now. I don’t make bracelets or beads anymore, but I knit, and I bake, and I write stories for the boy I used to be and the boy I still am.

My bedroom room door doesn’t have a lock on it. No big deal. I find places I didn’t have when I was a teenager. I’ve found a man I love. We’ve loved each other for ten years. Healthy love. Famous love. Married friends and family ask us for advice, a scenario the boy in Kentucky never would have dreamed. He wouldn’t have known how to respond to the questions even though he lived the only answer it’s possible to give when people ask him how.

How do you make it work?

Sometimes a snake eats its own tail in confusion. Don’t be that snake. Crawl out of your old skin if the old skin doesn’t work. Eat the old skin for nutrition the way lizards do. Grow but not at your own peril. Never devour the person you are now. Be an animal capable of history. Look forward as often as you look back. 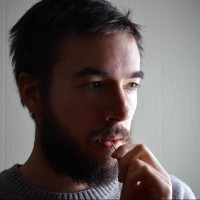