Beyond the Lights: Scripting Black Love in a Time of Protest

The first time I saw Love & Basketball, I was convinced that tallest-girl-in-school-but-still-not-an-athlete me could be the female Magic Johnson. To this day the friend who first taught me to play marvels at how I could have possibly thought to shoot the ball and then jump. But Love & Basketball taught me to believe in my own ability, questionable court skills be damned. I saw myself in the precocious, ambitious Monica. She was committed to her passions as she grew, even when they pushed the man she loved away from her. Monica and Quincy were complicated, conflicted, and real. They were black characters I fell in love with as they fell for each other, and Love & Basketball was the movie that introduced me to the sight of black people enamored of one another onscreen.

Gina Prince-Bythewood, Love & Basketball’s writer and director, released another film just last month that reflects the same deep commitment to honoring black people’s capacity to love. Beyond The Lights, which hit theaters with meager fanfare and a marketing campaign that failed to convey the richness of its plotline, has seen little attention at the box office. Earlier this month, Prince-Bythewood penned an open letter urging support for the film, calling on viewers to “be inspired” and “to fight” both for one another and for Beyond The Lights.

The film itself is an artful journey that seamlessly weaves through complex social and interpersonal issues. The characters are three-dimensional, understandable and deeply human, even at times when their actions feel selfish or outlandish. It traces the story of Noni (Gugu Mbatha-Raw), a pop star on the brink of pre-packaged commercial success who finds herself increasingly drawn to heroic police officer Kaz (Nate Parker).

Both struggle to find their footing and passion in their respective careers. Noni pushes back against her controlling (white) stage mother (played with grace and precision by Minnie Driver); Kaz reflects on his own reluctance to trace the road his father (a kind, old school Danny Glover) has paved for him. Viewers are privy to Noni’s growth, her mother’s motivations, Kaz’s fears, and his father’s labors. It is as much a film about embracing one’s passions and flaws fully in the face of conflicting expectations as it is a romance.

Mbatha-Raw dazzles as Noni, her carefully constructed veneer slowly cracking as she gains the courage to love herself (and ultimately, Kaz) without apology. Noni’s struggle to admit and seek help for her mental health concerns is cradled with tenderness both by Kaz and through Prince-Bythewood’s direction. Noni is an imperfect protagonist, and this makes her all the more relatable. Her fragility is an authentic insistence upon black women’s right to be nurtured, to receive care in a world that says we are to be content playing The Help in white women’s biographies.

Parker’s Kaz is strong but far from stoic; he approaches their romance with a quiet openness and warmth. Kaz plays a role often reserved for white romantic leads: the hero. But in doing so, he doesn’t stifle Noni or rob her of agency. Rather, he supports her as she learns to stand on her own two feet instead of insisting on sweeping her off of them. It is a rare position for a black man to occupy in film: loving, vulnerable, and in irrevocable awe of a black woman.

The soundtrack is soaring, dynamic and informative, as rich as the plot that takes flight on its wings. Nina Simone’s “Blackbird” features prominently, capturing both the raw pain and the fledgling power that Noni (and all black people) inhabit.

In her open letter, Prince-Bythewood notes the difficulties she experienced trying to get past crucial gatekeepers in an overwhelmingly white male industry — the same obstacles she experienced with Love & Basketball, which is now effectively canonical. Beyond The Lights comes at a time when people of color are routinely pushed out of media, barred even from roles that are only historically accurate when people of color play them. Black romances are particularly difficult to sell, and black mediamakers most often underfunded.

It is both because of and despite these hurdles that Beyond The Lights is so important. There is nothing more human than the desire and willingness to love, to affirm the beauty in someone else and grow alongside them. Black people, like all other human beings, are equal parts perplexed and propelled by love. But unlike white folks, whose innumerable recycled romances plaster movie theaters year after year, people of color are denied opportunities to broadcast our affection and revel in the beauty of our love onscreen. Beyond The Lights comes at a time when the whole world is watching as black people must contend with not only a law enforcement apparatus that kills us with impunity, but also a world that turns around and justifies those murders by putting black victims on trial for their own deaths. To see black people embrace one another — beautifully, boundlessly — on screen is revolutionary in a world that fundamentally denies black humanity.

Beyond The Lights succeeds not only in telling a story, but also in shifting the landscape onto which that story is graphed. Film is as much a site of discovery as it is a form of entertainment. Beyond The Lights allows viewers to experience the joys and trials of black love, and — through that — black humanity.

For some of us, that knowledge is already embodied. Black humanity is a fact, contested though it may be. And yet each representation that honors it feels special, a sign-post of something to come. Each story is a new possibility, a road map to a future in which our stories hold weight and our lives (and loves) matter. 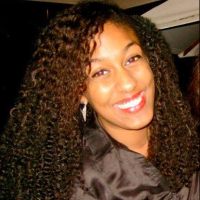 Hannah Giorgis has read every single Nicholas Sparks book and sobbed embarrassingly through all of them. She is a writer and organizer based in New York, but you can follow her on the interwebz @ethiopiennesays or on Tumblr.