When I was seven years old, my grandparents began a squatter’s garden over empty city land.

They had already dug up our entire backyard and planted it with Asian vegetables. They killed the lawn and my mother’s flower patch. They razed my sandbox. Wearing wide straw hats, and smocks sewn together from fabric scraps, they tore up the land from our back steps up to our tall white fence, littering it with tarps, planks of scavenged wood, and plastic containers to collect rainwater.

It wasn’t a likable garden. Our neighbors in this white, lower-middle class suburb in Winnipeg, Canada built high fences, but the barriers couldn’t keep the smell out. At night, my grandfather buried fertilizer peelings, eggshells, and coffee grounds; he didn’t wait for it to break down, he just put it all straight into the ground. Our yard smelled like trash. It looked like trash. It seemed a surefire way to attract rats. Except if there were rats, my grandfather would have mentioned them; the only thing he liked better than eating things was killing things. He liked to watch nature documentaries to speculate on how each animal might taste.

Worse yet than the smell were the vegetables that grew in that garden. The pat tsoi, spoon vegetable, Chinese celery, and heaping piles of mustardy greens that my grandparents tended ended up on our table every night in fibrous, tangled piles, uncompromisingly bitter. The recognizable vegetables—zucchini, pumpkin—didn’t turn into pies or cakes. The pumpkin was boiled in huge chunks, skin still on, to be gnawed on. The zucchini grew huge. Bigger zucchini fed more people, but they were chalky and full of seeds. My mother wrapped them in newspaper and kept them in the basement.

What I really would have liked them to plant were well-ordered rows of white-people vegetables: potatoes, carrots, or lettuce, neatly hoed with a seed-packet marker at the end of each sprouting. I wouldn’t have minded a curly wall of pea tendrils, some peas.

That was not what the garden yielded.

While it was contained by the fence, I could pretend that we were the same as everyone else. When the plants and tarps and planks and scraps spread out beyond our fence to the wide lot of city land, there was no way to hide.

One thing not lacking in suburban North America is space: it’s not just the parks, it’s the grassy patches at curbs dividing parking lots, the traffic medians, the green next to highways, the carpet of lawn before a house. If you are born here, you hardly see these stretches. But what are those spaces for? What is their use? Mostly they’re there to keep one thing from touching another. They’re convention made tangible.

Some would say those little green afterthoughts are open space—that’s a zen sort of thing, something that we Asians are supposed to know about. Some, like my grandparents, might say it is empty space. A stomach that needs to be filled.

Sometimes, I think of that unruly field as my grandparents’ desperation garden. Long years of scarcity taught them to feed themselves and their family in any way possible. Even now when they had enough—more than enough to feed us, enough to that they often bundled vegetables to sell for a pittance at the Asian markets downtown—they worked that land from six in the morning till late at night. My grandfather had been a banana farmer in Taiwan, and he grew up under Japanese occupation of the island. After World War II, around when my parents were born, Taiwan became a Chinese territory. In both cases, the occupiers were hostile to the native populace and the transition between regimes was chaotic. Official languages were suddenly switched from Japanese to Mandarin Chinese, stranding many adults in illiteracy (the unofficial language, a variant of Fujianese, was spoken only in the home). Native Taiwanese were denied government and military posts. Graft and extortion were rampant.

My parents, who immigrated to Canada in the 1970s, and my grandparents (who joined them in the ’80s) didn’t talk about their post-war experiences, not even with the scant handful of other Taiwanese people they socialized with in Winnipeg. No one was quite sure whose side anyone was on the fear of repercussions chased them to their new country. What they did talk about constantly was fear.

My family told me these things over and over in many different ways. But I didn’t know the whys and hows when I was seven. I didn’t understand why my parents were too nervous to go to community meetings, why we didn’t put a sign on our front lawn when my friend’s father ran for school trustee. I didn’t know that my father’s uncle, a man who used to take my dad fishing, was imprisoned for more than thirty years until his release in a general amnesty in the 1990s. I didn’t know that my grandfather’s cousin, a lawyer, disguised himself as a worker and hid himself on my grandfather’s farm for three days during a purge now known as the 228 Incident. I didn’t know that my uncle, my dad’s brother, a swimming champion in the army—and this is the saddest, pettiest story—was told to hand his prize over to his superior officer if he valued his life. (Because I too am petty, I like to imagine the prize as a dinky little trophy, placed over the officer’s cot, with the words, #1 Backstroker. That’s probably not what it was, though.)

My family lived in fear about major and minor things: taxes, language, war, hunger, imprisonment. When they came to Canada, they brought those fears with them.

When my grandfather speculated on how animals tasted, it was because fear and scarcity had been a big part of his life.

I was seven. I didn’t understand.

They planted the illicit garden. They put up tarps. They put down planks. They buried their stinky brew in the soil. But in summertime, at night, teenagers would drink in those same vast empty fields. They’d stand on the man-made hill overlooking the public pool, the junior high school, the fields, our house and throw rocks at the streetlamps. On some summer nights, groups of them would descend from that hill and throw bottles at the garden, and at my grandparents. Sometimes, they’d use the crops as weapons.

The squash were easiest to smash and probably the most satisfying to wreck. Pick up a huge zucchini or a pumpkin. Hurl it into at the fence, at the people screaming. A few teens would peel off to grab as many vegetables as they could. The rest of them would chant and laugh and egg them on.

I would stand inside the fence and stare from between the slats, shivering in my pyjamas. My grandparents would yell from the gate. Sometimes, our neighbor, Elaine, would stand at her gate and call at them, too.

The thing I remember most from those nights was being afraid.

It was dark. There were groups of teenagers. There was yelling and screaming—I don’t remember what the teens called us and perhaps it’s better I don’t. Irrationally perhaps, I blamed my grandparents.

Don’t stand out, they told me. They shouldn’t have moved beyond the fence. They should have listened to their own advice.

When I was seven, I wanted to blend in. I would have been happy to not have to worry that the garden’s smell wafted far and wide, that the neighbors were talking about us, that my schoolmates would find out how we lived, that I’d be woken by yelling, that a bottle would hit my mom if she tried to intervene.

Some thirty years later, the vegetables are long gone, my grandfather’s kidneys are failing, and I no longer live in Canada—but the fear is still fresh. Yes, I know better how to negotiate my place. When I want to be uppity I can go to the farmer’s market and pay five fucking dollars for a few sprigs of pat tsoi and patronizingly explain to a white lady how to cook the greens. But then, supposedly, I have a better idea of how to play the game than my grandparents did.

Now, I am of two minds: I know my grandparents shouldn’t have been planting in public space. They were doing something illegal. At the same time, that argument seems pallid. It wasn’t my grandparents who threw bottles and vegetables. It wasn’t they who traveled in packs and screamed racial epithets in the night. The field stood empty for years before my grandparents started cultivating it. It was ugly, but was it really that much worse than the dirt and the weeds that sat there before? Did my grandparents deserve to be frightened and harassed for putting something different out there?

My grandfather and grandmother performed a personal action in a public space. Their act wasn’t meant to be political, but it was in a response to the events that shaped them. They maintained that garden stubbornly and stoically. They tilled and tended a visible monument to their hunger. They were hungry in a country—in a life—where food seemed plentiful.

After a two or three years of planting that field, and enduring those awful, awful nights when the teenagers smashed the crops, my mother received a polite letter from the city of Winnipeg. My mother showed it to me—my English was better than hers—to make sure she understood. I still remember the letterhead on thin white paper: it had come to the attention of officials that public land was being used in an inappropriate manner. My mother waved the letter at her parents—not that they could read it.

They feared the government far more than they feared a bunch of drunken teenagers—how different it was the from my naive point of view—so they pulled their operations back inside the fence.

The official line, the one that gets printed on letterhead, is that we want people to be what they are. But the unofficial line comes out after a few drinks, late on dark summer night. Sure, visible minorities can be visible—a few pretty dances in bright costume, a few lines in a dumb essay—but when they do things outside of convention, when they cross certain lines, there are repercussions. If our culture truly wants people to be visible—if we want them to participate and be themselves—we have to realize that that visibility, that expression, is not always going to take forms that we understand or approve of. It can’t.

The greens from my grandparents’ garden remain bitter, even after you blanch them.

Next spring, city workers came out with trucks and lay down sod in the fields. They erected goal posts. They painted white lines on the neatly trimmed grass. By summer, we had a regular rotation of peewee soccer teams playing in the fields. My grandparents—still dressed in their wide gardening hats and patchwork aprons—would stand on the sidelines with the parents and watch and beam. They liked the toddlers. They could enjoy watching the kids scream and run and play across land they’d once cultivated. And if, on occasion, a few sprouts crept up from under our fence and thrived untrampled, my grandparents made sure that they received water. 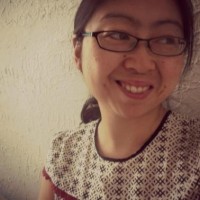