Before there was #thestruggle, there was The Struggle, or more accurately “I’m struggling.” #thestruggle was sleeping through an alarm, a bathroom with every stall taken when you had a narrow sliver of time to use it. “I’m struggling” was crying every time I heard my alarm, or in that bathroom stall typing that message, or in my car as Christmas music played through my speakers. My favorite season, my birthday, and my beloved winter holidays were sacrificed to my brain and its chemical failures.

After years of questioning whether Seasonal Affective Disorder was a real condition, I realized that it was indifferent to my skepticism. SAD doesn’t need you to believe it exists, it makes itself known. Still, I was no stranger to the psychiatrist’s office, which somehow made me even more reluctant to say “I’m depressed.” I thought of the poem “Not waving but drowning” and felt it keenly, but still wanted to choose something less dramatic than “drowning.” So I chose “struggling,” and I certainly was.

In my wisest years (or in years that my boyfriend figured out that my persistent black mood was biological), I would be able to deal with it medically or behaviorally. An uptick in anti-depressants, or a dreaded increase in intake of sunlight in a part of the country that became bitterly cold when the days shortened, would work. However, some years there were other contributing factors that I thought might explain the emptiness. I wasn’t self-aware enough to figure out why I wanted to lay down on the ground, cheek melding to the cold pavement, rather than continue to walk the extra 50 feet to my dorm room. Some years I would try to exercise more, as if I could outrun the change of the year. For the length of a 5k I was happy again, but the endorphins would be blunted shortly after; I was the fittest, most depressed version of myself that I could remember.

In addition to the benefits of exercise, credentialed medical professionals say, as if it’s obvious, that a natural light lamp is the key to feeling better. That it’s just 20 minutes right away in the morning, and then you’ll be fine. I dream of inventions that would make this possible — sun lamps in the vanity mirror of my tiny Hyundai, or an old fashioned-looking desk lamp that would blend into my very visible circulation desk. Maybe a UV light that attached to a hairbrush? My mornings are a flurry of activity, as long as I can pry myself out of bed. I wonder who has a life of leisure that accommodates luxuriating near one of these hulking lights every morning. I already wake up at 5:45 for work, and I have a strong feeling that rolling it back to 5:25 would only devastate my sleep-craving brain further.

When students at my job asked about my bloodshot eyes, I assured them it was allergies. Allergies are convenient. Allergies are impersonal. Allergies are something that you can discuss with every person on the planet, without fear of discomfort or judgment.

Allergies are treatable. And, at least in my case, so is seasonal affective disorder. I remain conflicted on the usefulness of the sun lamp, even as its $150 worth of harsh light shines directly into my eyes. On days where the long dark tea-time of the soul seems to start with my morning coffee, I plug it in and place it on the floor next to where I sit. I worry that I will be judged, or that some students at my school will see it, know what it is, and whisper about my shortcomings. However, teenagers can be oblivious, as a rule, and I am strange enough that they don’t think much of a lamp on the ground.

Beyond the light cure, after a particularly sob-filled winter two years ago, Wellbutrin once sucked all the cobwebs out of my brain. A few days after I started taking it I woke up feeling like the concrete that had shot through my veins was breaking up and releasing me to accomplish goals beyond brushing my teeth and feeding my dog. A couple of weeks into the regimen, my fiance and I went to Disney World; I felt my eyeballs suck all the Orlando Vitamin D in greedily. I was changed, and while I know it was all in the timing and the bupropion concentration, I will forever link hugging Pluto with a resurgence in my desire to be alive.

Still, there are no guarantees. In mid-November I heard a song I’d listened to on repeat all summer and was shocked to discover, for the first time, the desperation and sadness in it, notes like knives hidden in the chorus. It was enjoyable while the sun shone, but almost unbearable in the dark at 5pm.

“It’s Beginning To Look a Lot Like Christmas” has become a warning sign for me, and not a carol. My life is not the same in my formerly favorite time of year. It’s important to have those realizations, to acknowledge that weeping in a Dunkin Donuts or sleeping immediately after returning home from work, only to go back to bed at 9pm, may not be healthy. It can be equally crucial to love and be loved by a person who texts you and asks you to report on your “glooms,” concerned that you’re slipping into darker territory. “Struggling” and the “glooms” are code words that we use to gauge how I feel; their deployment is as obvious as buying pet-friendly snow melt and conditioning our skis. When the sun and the warm weather return, we pack them away like mittens to be used at the next sign of frost. 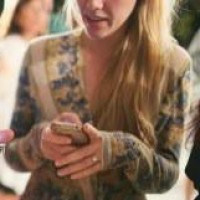 E. Sparling is a freelance writer and speed reader.